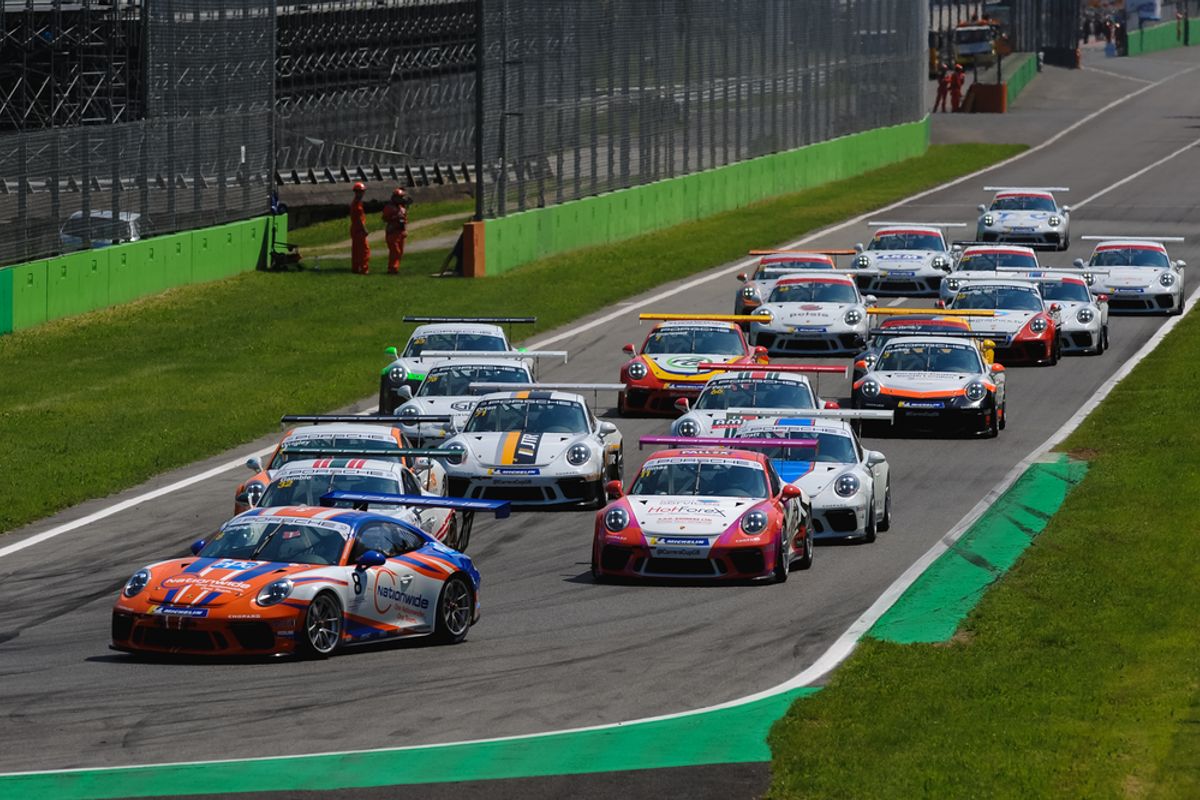 Dino Zamparelli (Redline Racing) heads to Cheshire with his championship lead having eased up to a slender six points following a victory and second place at Monza. However, Zamparelli’s major championship rival Tio Ellinas (Slidesports Engineering) was in his mirrors all weekend – Ellinas finished on the podium directly behind Zamparelli in both races and has shown exceptional consistency in just his second season of sports car racing.

Tom Wrigley (JTR) heads to his local circuit with the momentum of a podium and fourth place finish in Italy, a continuation of a season-long form that underlines his potential and that has earned him third in the overall championship standings. Likewise, his team mate Lewis Plato (JTR) has already clinched a maiden victory in 2018 and has gained a reputation as one of the fastest starters on the grid – a useful skill at Oulton Park where overtaking around the fast, flowing lap can be tricky.

Another JTR driver threatening to upset the developing form at the front is 17-year-old Porsche GB 2018 / 2019 Junior Dan Harper. Already a podium finisher in 2018, Harper claimed a maiden pole position at Monza in only his fifth Porsche Carrera Cup GB race. His qualifying time would have put him on the front row of the grid at the most recent Porsche Mobil 1 Supercup race at the classic Italian circuit, held last September using the same 485 hp second-generation ‘Type 991’ 911 GT3 Cup.

Following his maiden Porsche Carrera Cup GB race victory at the start of the season, Rookie George Gamble (Amigos Team Parker) ran a faultless second race at Monza. Gamble’s overall victory saw him to join championship leader Zamparelli as one of only two double winners in 2018. Gamble will undoubtedly be returning to a circuit he knows well from his junior racing career with confidence and the expectation of another strong result.

Will Bratt (IN2 Racing), an experienced and successful single-seater competitor, was a driver set to perform well at Monza before getting caught up in incidents in both races. Bratt only began his 2018 Porsche Carrera Cup GB campaign at Donington Park, but quickly got on terms with the rest of the Pro category field. The technical and challenging Oulton Park could be just the platform Bratt needs to realise his potential. Former BTCC star James Kaye (GT Marques) is another Pro category newcomer adapting well to the second-generation 911 ‘Type 991’ GT3 Cup after decades spent racing – and winning – in front wheel-drive machinery.

Jamie Orton (JTR) retains his lead of the Pro-Am championship, but the Rookies in his mirrors are closing the gap every weekend. Seb Perez (Amigos Team Parker) has emerged as one of the category’s main challengers and will be looking to carry forward the momentum of two category victories at Monza into the upcoming weekend. Similarly, two podium finishes for Dan Vaughan (Motorbase Performance) put him just one championship point behind Perez in second to make the category battle, at the moment at least, a three-way fight.

Rapidly closing in on the top trio is Rookie Esmee Hawkey (GT Marques), who showed her strongest pace of the season so far in Italy which translated into a second place finish and maiden pole position following the reverse grid for round six. Greg Caton (G-Cat Racing) and fellow experienced category runner Justin Sherwood (Team Parker Racing) will both want to put a difficult pair of races last time out behind them and get back to challenging the newcomers in Cheshire.

The Am category has consistently produced some of the closest racing of the season so far. Category points leader Peter Kyle-Henney (IN2 Racing) might have convincingly won the first race at Monza, but retirement in the second lessened his points advantage at the top of the Am table. Closely matched rival and rapid Rookie Peter Mangion (Team Parker Racing) has often been hot on the heels of Kyle-Henney, scoring a podium result at Monza. So too Shamus Jennings (G-Cat Racing), who was embroiled in a thrilling battle with a delighted race two winner, Iain Dockerill (Asset Advantage Racing), for much of the weekend in Italy.

Continuing to adapt to the 911 GT3 Cup is Richard Hawken (Slidesports Engineering), the former BTCC racer improving with every session. Hawken and returning team mate David Fairbrother (Slidesports Engineering) showed similar pace at Monza and will be hoping to push one another further up the grid as they return to the more familiar surroundings of Oulton Park. Gary Eastwood (G-Cat Racing) and Fraser Robertson (Redline Racing) made it no further than the first lap in the second race at Monza, so both will be looking to put that disappointment behind them.