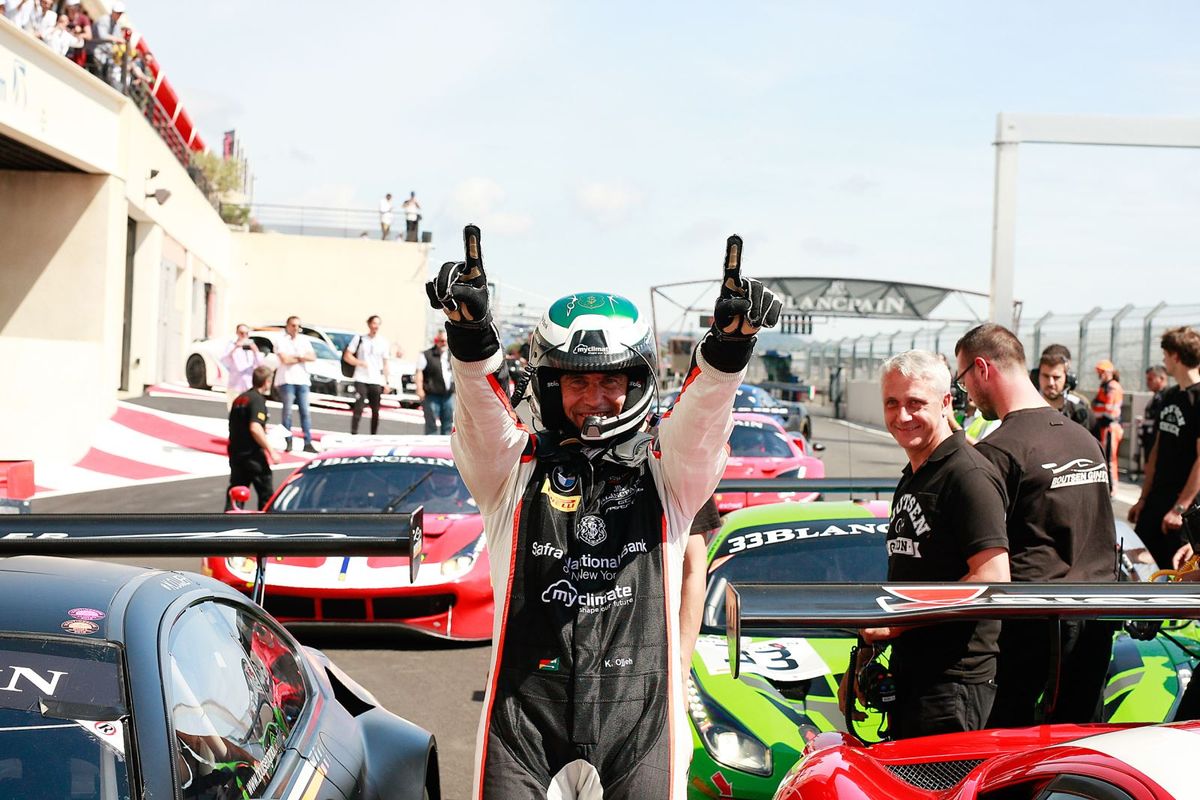 At the start of the 40-minute race, Karim Ojjeh swooped ahead of Luigi Lucchini and pulled a comfortable gap, as the Italian came under pressure from behind. Patrick Van Glabeke (AF Corse #488 Ferrari 488 GT3) made a strong start to move into third, as Coach McKansy (#17 HP Racing International Lamborghini Huracan GT3) dropped back to seventh.

Murod Sultanov was the driver on the move though, climbing from ninth on the grid to fourth by the end of lap one. The Russian joined an intense battle between himself, Luigi Lucchini and Patrick Van Glabeke for the final podium spot, the latter going wide and dropping to fourth.

Double Monza race-winner Mario Cordoni and Christian Hook soon caught the back of the fighting Ferraris, and both were able to slip by one when Patrick Van Glabeke made an error. However, as the race entered its final 10 minutes the German and Italian drivers collided, with the AF Corse racer receiving a drive-through penalty.

Up front, Karim Ojjeh never looked back and cruised to victory, giving him the championship lead as the field prepares for Misano. 0.281 seconds separated Luigi Lucchini and Murod Sultanov across the line, with Patrick Van Glabeke holding onto fourth place.
Christian Hook was able to recover from the late incident to finish in fifth position, ahead of Jürgen Häring who fought off the AF Corse of Frederic Fangio (#53 Ferrari 488 GT3) to finish sixth.
Claude-Yves Gosselin (#4 Boutsen Ginion Lamborghini Gallardo Extenso R-EX), who had an alternator problem in the Qualifying Race, produced an excellent recovery drive from the back of the grid to finish eighth overall and fourth in the Titanium Cup class.

Ninth was Edward Lewis Brauner in the #991 Herberth Motorsport Porsche 991 GT3 R, with Angélique Detavernier (#55 AF Corse Ferrari 488 GT3) recovering well after being hit into a spin early in the race to collect the final point in 10th.

Up next for the Blancpain GT Sports Club will be round three of the championship from Misano, Italy (22-24 June), which will once again be live streamed on our YouTube channel, Facebook page and website.

Karim Ojjeh (#2 Boutsen Ginion BMW M6 GT3): “It was a great race actually, it went very quickly! As soon as I had the lead I just kept my concentration and was surprised when the team told me we had 25 minutes - I didn’t really feel tired. I was really happy with the pace and knew exactly what to do with the car. The start was great and I managed to pull a gap to the Ferraris, which was the aim as they are quick. When I extended the lead to about eight seconds I thought ‘OK I have to stay focused here’ and I did. Tyre wear started to come into affect and I had to change the traction control slightly but overall I’m very pleased.”

Klaus Dieter Frers (#3 Artega Rennsport Ferrari 488 GT3): “I learned a lot from the Qualifying Race start, which was a little bit tough for me, and it was much better for this one. I had a wonderful race and was able to keep up with other drivers who previously were pulling away from me. In the last third my tyres were getting a bit too worn, so I made sure to keep calm and not overdo it. It was such a nice opportunity to be racing at Paul Ricard today, I enjoyed it so much!