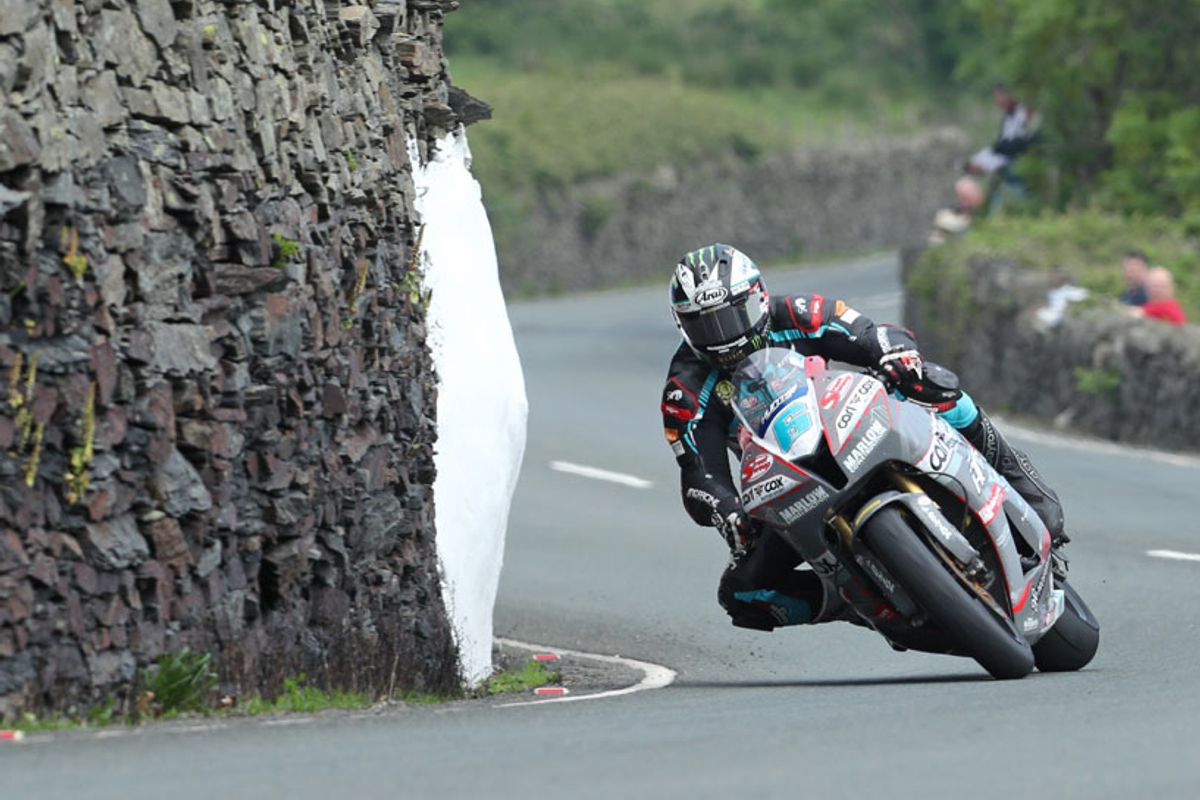 Dunlop’s second lap of 129.197mph shattered his own lap record from 2013 and it propelled him to his second win of the week and 17th in total. Harrison’s second place went some way to make up for the disappointment of retiring from Saturday’s RST Superbike race with the same applying to Peter Hickman (Trooper Beer Triumph) who took third.

Harrison led through Glen Helen on the opening lap, the Bradford rider holding a one-second lead over Dunlop with James Hillier a further two seconds behind in third. Hickman, Gary Johnson and Lee Johnston rounded out the top six.

At Ballaugh, the gap between first and second was just 0.2s and by the time they swept round Ramsey Hairpin, Dunlop was in front by a second. Hillier was now eight seconds adrift in third with Hickman still in fourth and only 0.2s behind but Conor Cummins was now up to fifth ahead of Johnson.

Dunlop’s opening lap was 128.265mph which put him 1.7s ahead of Harrison and it was now Hickman in third, his advantage over Hillier 2.5s. There were changes happening further back too with Johnston now ahead of team-mate Cummins as Johnson, Josh Brookes, Derek McGee and Jamie Coward completed the top ten.

Second time around through Glen Helen and Harrison had pulled back a tenth of a second and it now looked to be a two-horse race with Hickman now some 14.2s adrift. He’d edged away from Hillier though with the gap up to 3.3s with the gaps to Johnston and Cummins three seconds each.

On the run to Ballaugh, Dunlop added another second to his lead and by Ramsey it had increased further to 4.6s. Indeed, as he came into the pits for his solitary pit stop, a stunning new lap record of 129.197mph gave him a healthier advantage of 6.4s. Harrison was 22.7s clear of Hickman but the final podium position was still wide open with Hickman only 3.6s ahead of Hillier who, in turn, was only three seconds ahead of Johnston. Johnson, Brookes, James Cowton and McGee were filling seventh to tenth.

Hillier was now leading on the road and a superb pit stop meant he was only 0.2s adrift of Hickman at Glen Helen on lap three and over ten seconds clear of Johnston whilst Dunlop’s advantage had moved up to nine seconds. And by Ballaugh, Hillier had taken over third from Hickman albeit by 0.6s but this had doubled to 1.2s by Ramsey.

Going into the final lap, Dunlop and Harrison were now together on the road with the official gap being 9.4s and Hillier still held onto third with the difference between him and Hickman still only 1.5s. Cummins was a further 19.2s back in fifth with Johnston continuing to hold onto sixth although the gap to Johnson was down to five seconds.

The final lap saw Dunlop and Harrison circulate together and with neither having any issues, they duly came home in first and second. The duo eased back in the closing stages so much so that Harrison was only 0.258s ahead of third placed Hickman, who got the better of Hillier for the final podium position by 1.8s.

Cummins was secure in fifth but sixth place was also in doubt until the chequered flag and Brookes took the position after a final lap in excess of 126mph. Johnson, Johnston, Cowton and Ivan Lintin completed the top ten.

The Joey Dunlop Championship sees Dunlop lead with a maximum of 50 points ahead of Cummins (31) and Hillier (29) while McGee now leads the TT Privateer’s Championship on 38 points from Phil Crowe (35) and Sam West (33).

Shortly after the conclusion of the Race ACU Events Ltd confirmed that newcomer Adam Lyon from Scotland had been involved in a fatal accident at Casey’s. ACU Events Ltd wishes to pass on their deepest sympathy to Adam’s family and friends.