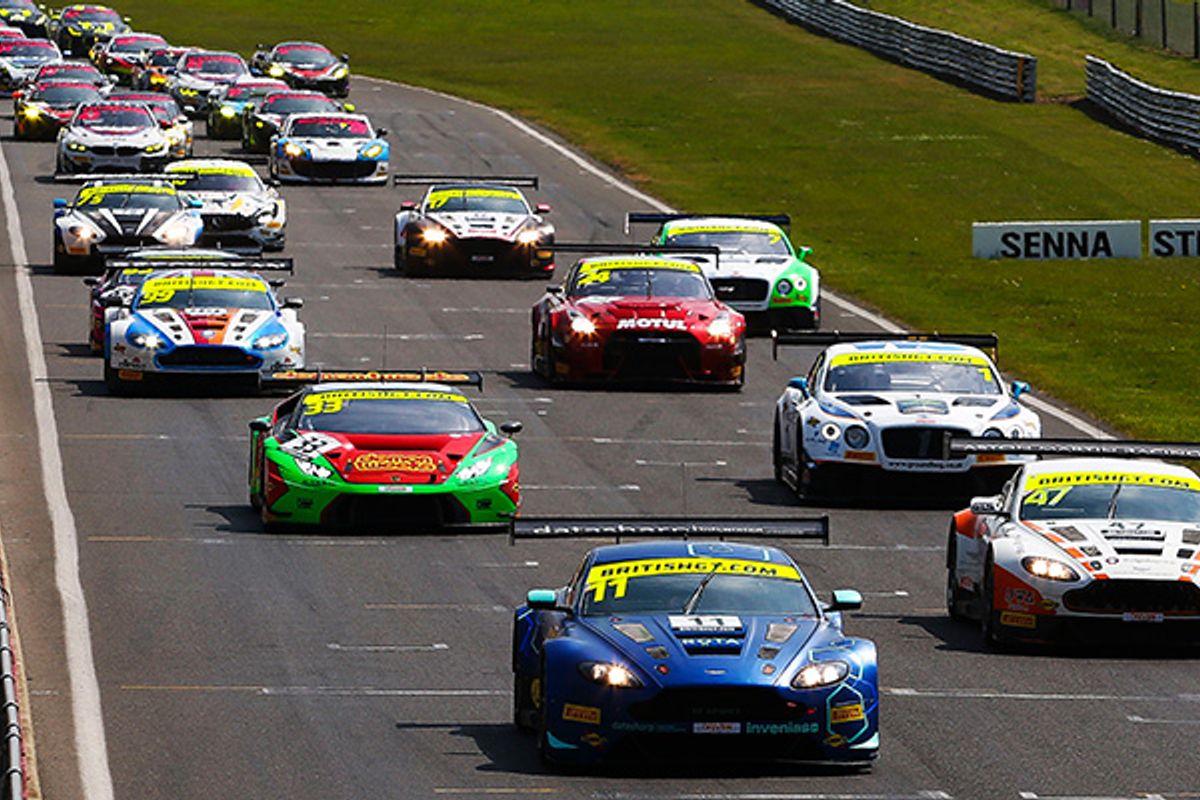 It’s the big one! British GT returns to Northamptonshire’s Formula 1 venue this weekend for its only three-hour race of the season – the Silverstone 500 – where points-and-a-half plus the historic RAC Trophy are both up for grabs.

So too is another chance for crews to take a firm grip of their respective GT3 and GT4 championships, something that’s yet to happen in either class this term.
The event’s prestige has also attracted several new entries, with a season-high 14 GT3s joining the 22 GT4s scheduled to compete this weekend. The newly-resurfaced 3.661-mile, 18-turn Arena Grand Prix Circuit is also expected to produce much faster lap times than previous years, while the event’s Supercar Sunday element – featuring family entertainment and hundreds of supercars – is sure to draw a large crowd, just as it did in 2017.

GT3: TIME FOR SOMEONE TO MAKE A STAND

Five races, five different winners. That’s the state of play in GT3 as the 2018 campaign enters its second half at Silverstone. But with almost as many points available for the final four endurance contests as those already done and dusted, there’s still every opportunity for almost any entry to mount a championship challenge.
Indeed, the top seven crews are separated by less than the 37.5 points available for victory this weekend.
Lee Mowle and Yelmer Buurman’s full marks at Rockingham helped them retain top spot in spite of two subsequently tough Snetterton races a fortnight ago. However, the ERC Sport duo saw their championship lead slashed to just 4.5 points by Barwell Motorsport’s Jon Minshaw and Phil Keen (Lamborghini) who, just like their Mercedes-AMG rivals, won’t serve a pitstop success penalty on Sunday.
That honour is reserved for the next three Aston Martin pairings, all of whom featured on Snetterton’s Race 2 podium last time out.
Three rostrums in as many events see Beechdean AMR’s Darren Turner and Andrew Howard sit 12 points behind the championship leaders. A thrilling battle for victory at Snetterton might not have gone the latter’s way but it undoubtedly proved the two-time champion has lost none of his fight. Now he and Turner must be similarly combative this weekend if they’re to overturn a 15s success penalty at a venue where they finished third together as long ago as 2010.
TF Sport’s drivers dominated at Snetterton and all four should be a threat again at Silverstone where Aston Martin claimed pole position 12 months ago. Race 2 victory last time out ensures Derek Johnston and Marco Sorensen must serve the full 20s success penalty at the first of their three mandatory pitstops, while team-mates Mark Farmer and Nicki Thiim – who bounced right back into championship contention with a win and podium – have a 10s handicap.
Elsewhere, Optimum Motorsport’s Flick Haigh and Jonny Adam have so far failed to match the promise they showed on the opening weekend at Oulton Park, while a difficult round for Ian Loggie and Callum Macleod at Snetterton has consigned Team Parker Racing’s best placed Bentley crew to seventh.
Its other car features reigning champion and 2017 Silverstone 500 winner Rick Parfitt Jnr who, together with Ryan Ratcliffe, would dearly love to keep hold of the RAC Trophy he and Seb Morris won last season.
A first British GT podium last time out for Graham Davidson and Maxime Martin mean Jetstream Motorsport’s Aston Martin can’t be discounted either, while the returning Team ABBA Racing Mercedes-AMG also features recent Silverstone podium finishers, albeit from other series, in the form of Richard Neary and Adam Christodoulou. The latter also ensures that eight GT3 factory drivers will start this year’s race after Balfe Motorsport’s McLaren – peddled by Shaun Balfe and Rob Bell – was confirmed following its Snetterton sabbatical.
Elsewhere, a one-off appearance from Ultimate Speed’s Aston Martin guarantees a season-high 14 GT3 cars are entered this weekend.
GT4: A SIXTH DIFFERENT WINNER IN AS MANY RACES?

For GT3, read GT4 where the opening five races have produced as many different winners representing four different manufacturers. That variety, as well as inconsistency, sees the championship’s top-two separated by half-a-point and first 11 entries covered by the same number of points as available for victory this weekend.
Championship leaders Patrik Matthiesen and Callum Pointon also share something in common with their GT3 counterparts Mowle and Buurman after victory at Rockingham helped them counter a tricky outing at Snetterton. As such HHC’s #55 Ginetta just about leads Tolman Motorsport’s incredibly consistent Charlie Fagg and Michael O’Brien who are the only crew other than their championship rivals to have picked up points in every race so far this year.
Academy Motorsport’s Will Moore and Matt Nicoll-Jones are arguably the series’ form line-up right now having outscored every other GT4 crew since failing to register on the opening weekend. Three podiums in as many races – the latter somehow achieved with a broken gear paddle – sees their Aston Martin lie one place ahead of Snetterton winners Ben Tuck and Ben Green, whose Century Motorsport BMW must serve the maximum 20s success penalty at Silverstone.
Tolman’s Pro/Am class leaders Joe Osborne and David Pattison are also in overall championship contention after recording their maiden GT4 win together at Snetterton, while fellow McLaren drivers Adam Balon and Ben Barnicoat will be eager to repeat Track-Club’s Silverstone success from last season.
Mercedes-AMG make it five manufacturers represented in the Drivers’ championship’s top-seven places, Nick Jones and Scott Malvern’s Oulton Park victory helping to keep theirs and Team Parker’s title hopes alive.
But the remaining three full-season marques have also shown promise this year, and none more so than Toyota whose Steller Motorsport-built and run GT86s demonstrated real pace in qualifying at Snetterton. UltraTek Racing Team RJN’s Nissan 370Zs also came of age at Rockingham thanks to a one-two Pro/Am finish, while Invictus Games Racing’s brand-new Jaguar project just missed out on its first British GT points at Snetterton.
Speaking of which, Invictus’ second batch of wounded, injured and sick armed forces veterans make their British GT debuts this weekend when Basil Rawlinson (2nd Battalion Parachute Regiment) joins Jason Wolfe in the #22 F-TYPE SVR and Paul Vice (42 Commando Royal Marines) teams up with Matthew George aboard #44.
George is also registered to race as James Holder’s co-driver in the Generation AMR Super Racing Aston Martin. And it’s not a typo! George and Holder last contested a full-season British GT programme together in 2016, which ultimately led to David Appleby Engineering – which runs the V8 Vantage – overseeing 2018’s Jaguar project. George will therefore split his weekend between both cars and swap between them during the race.
British GT’s three-hour race starts at 13:10 on Sunday. Watch it live, uninterrupted and for free on the championship's Facebook page and website, as well as SRO’s GT World Youtube channel.
TYRE INFORMATION – PIRELLI
Pirelli supplies the GT3 class with the P Zero DHD2 tyre, which was introduced at the start of the 2018 season for GT racing around the world. The GT4 class uses the P Zero DH tyre. In the event of rain, both classes will use the Cinturato WH wet-weather tyre.

Jonathan Wells, Pirelli UK motorsport manager: "The Silverstone race is one of the most interesting from a tyre perspective, with the three-hour format providing more options to the teams in terms of strategies. Silverstone is also usually one of the most demanding circuits on the calendar for the tyres thanks to the many fast corners. However, the new smoother surface has reduced wear and degradation rates, as we discovered at the recent Blancpain GT Series event with the same P Zero DHD2 tyres that we supply in British GT3."