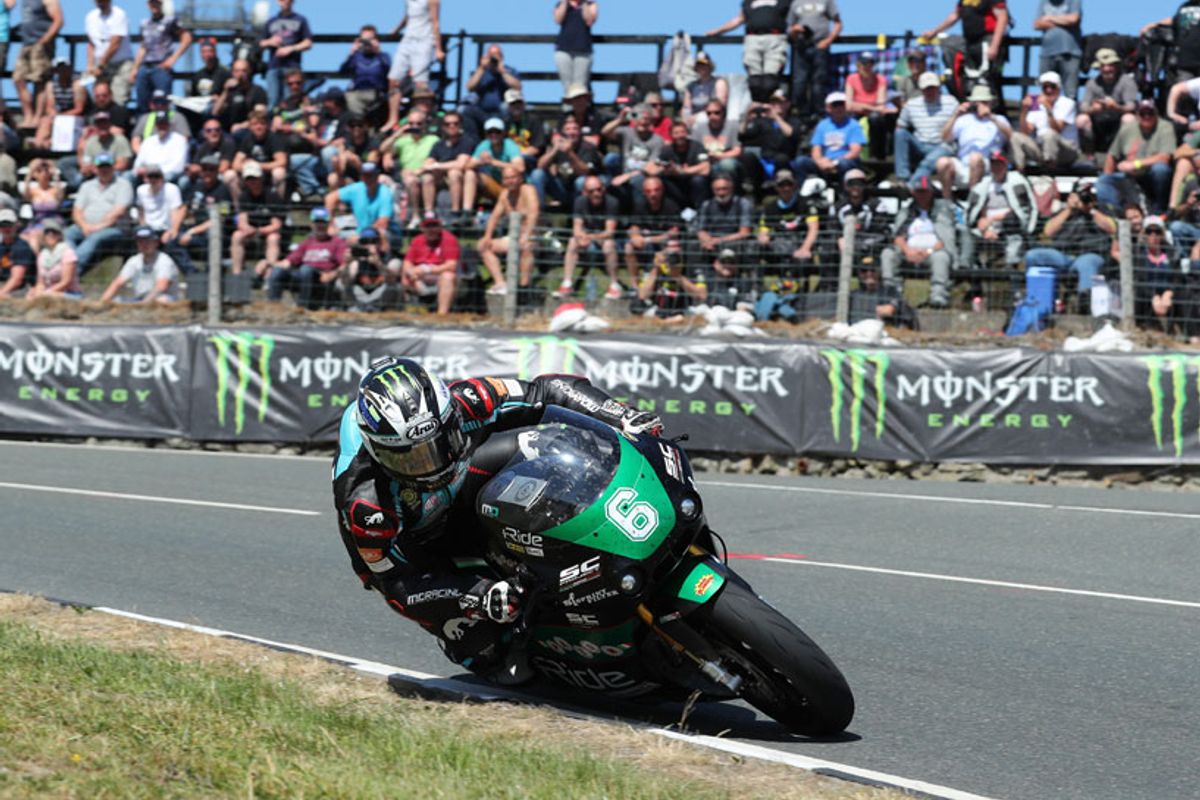 Michael Dunlop took a record breaking win in the Bennetts Lightweight TT on Wednesday afternoon at the Isle of Man TT Races fuelled by Monster Energy with the Paton rider smashing both the lap and race records on his way to his 18th TT win.

Despite a relatively steady start, Dunlop took advantage of early leader Ivan Lintin’s retirement at Bedstead on lap two and with a new lap record of 122.750mph, he came home 14.6s clear of Derek McGee and Michael Rutter. McGee second place was his first TT podium. Dunlop beat the old race record by over a minute.

McGee led at Glen Helen on the opening lap with the Irishman flying on the KMR Kawasaki although it was close with his lead over Lintin just half a second. Dunlop was 1.6s back in third with Stefano Bonetti, James Cowton and Rutter slotted into fourth, fifth and sixth.

By Ballaugh, Lintin had nosed ahead by 0.8s but one man in trouble was David Johnson, the Australian stopping to make adjustments to his KMR Kawasaki at Douglas Road Corner. By Ramsey Lintind was 2.9s clear of new second placed rider Dunlop as McGee slipped back to third albeit only 0.3s. Bonetti, Cowton and Rutter continued to fill fourth to sixth place positions.

Johnson retired at Sulby Bridge but a new lap record of 121.603mph gave Lintin a 5.7s lead over McGee who was continuing to excel and was also inside the old lap record. Dunlop was only a further second behind in third as Bonetti, Cowton and Rutter remained in fourth to sixth.

Second time around Lintin still led at Glen Helen by six seconds but Dunlop had got back up into second with McGee now a second back in third. Bonetti was over 25s adrift in fourth but Rutter had moved ahead of Cowton by a tenth of a second to make it three Patons in the top five.

Coming into the pits at the end of the second lap, half race distance, and there was drama as it was Dunlop who led with another new lap record of 122.257mph. Lintin went through Cronk ny Mona but retired at Bedstead and that promoted McGee up to second, only four seconds behind Dunlop, with Cowton now third.

Rutter was up to fourth but he was coming under pressure from Peter Hickman and Bonetti as just 0.3s covered the trio. Daniel Cooper, Ian Lougher, Michael Sweeney and Joey Thompson now completed the top ten.

There was a change after the pit stop with McGee’s team doing a great job on the fuel and he led Dunlop by 3.1s at Glen Helen on lap three. There were changes further back too with Cowton going out at Crosby and Hickman made it two KMR Kawasaki’s in the top three as he overhauled Rutter.

Dunlop called on all his extra experience around the Mountain Course though and by Ramsey, he was back in the lead by 1.2s but McGee’s excellent ride saw him slash the gap to just half a second at the Bungalow. Hickman appeared to be in control of third as he extended his advantage over Rutter to 10.6s. Cooper was out though having retired at Glen Duff.

Going into the fourth and final lap and Dunlop had responded with the margin to McGee having crept out again to 1.6s and the Ulsterman wasn’t to be denied as he came home for his 18th TT win and third of the week.

McGee was delighted with his maiden TT rostrum but team-mate Hickman went out at Union Mills on the final lap and that promoted Rutter up to third for his 17th TT podium and with Bonetti finishing fourth and Thompson in fifth, four Patons finished in the top five.