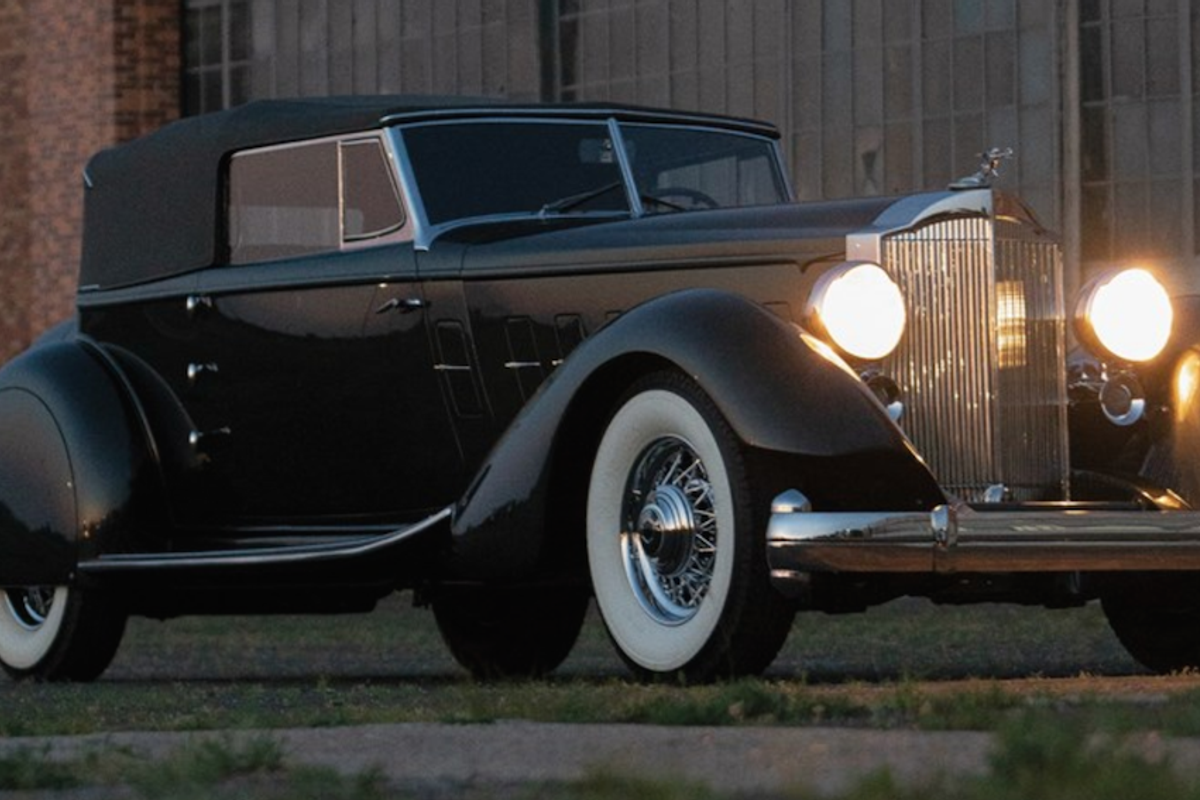 Offered from the Esteemed Collection of Judge Joseph and Margie Cassini

Best of Show, 2016 Concours d’Elegance of America at St. John’s

A Dietrich Packard of peerless significance and allure

THE DETAILS OF A DIETRICH -
It is all about the fenders.

Yes, vehicle number 1108-65 is one of four extant Dietrich Individual Custom convertible victorias on the “ultimate” Packard chassis of the Classic Era, the Eleventh Series Twelve of 1934.

It has all of the typical spectacular Dietrich design cues, from the “false hood” extended back to the windshield, to the cowl that sweeps elegantly back into the doors in a subtle and graceful curve, to the vee’d windshield. Yet, it is so much more, and it is all because of those eye-catching, remarkably curvaceous fenders, some of the most beautiful on any Classic automobile and a unique feature of this one-off design.

The dramatic tapered fenders, with full “skirts” over the rear wheels, and their streamlined running boards are clearly inspired by the sport phaeton, sport coupe, and runabout speedster designed for the 135-inch-wheelbase 1106 Twelve chassis by Count Alexis de Sakhnoffsky and built by LeBaron.

Inspection of the fenders and running boards reveals that they are not completely identical to the LeBaron design, but rather a very close facsimile, indicating that they were likely produced by the Packard Custom shop in Detroit (the same that finished the Individual Custom Dietrich bodies).

Packard historian Edward J. Blend recalled the late C.A. Leslie noting a memo that “special teardrop fenders, because of their spectacular eye appeal, would be available for use when applicable on other Dietrich bodies,” but they are known to have been installed on only two cars: this convertible victoria and a phaeton.

The fenders turn a visually impressive but relatively formal design into one of considerable sportiness and audaciousness, with more than a hint of Auburn speedster or French coachbuilding. Combined with an integrated luggage compartment and the covered dual rear-mounted spares, flanked by unique “bumperettes,” they turn a Dietrich Individual Custom into a Full Custom.

Beyond mere modifications, they are a transformative feature that changes the entire character of the car – and makes it not merely rare and desirable, but among the world’s most significant Packards.

A TALE OF TWO JUDGES

The Packard is believed to have been part of the company’s “Traveling Salon,” a group of special show cars that made appearances in various locales between Detroit and New York. One of its appearances was at the Pittsburgh Auto Show, where it was seen by an 11-year-old Edward J. Blend. Blend sketched the car quickly in pen, and fortuitously saved the sketch.

The car was acquired in New York, at the end of its tour, by Ricardo LaCosta II, a prominent attorney and future judge from a prominent Puerto Rican family. LaCosta was a somewhat flamboyant sort, partial to custom Packards, and was a regular customer for bespoke automobiles over the years.

The jurist was photographed behind the wheel of his new Packard Twelve in Puerto Rico, in a well-known photograph that has appeared in several books over the years, most prominently in John Conde’s Cars with Personalities.

After LaCosta’s eventual passing, his family had no interest in the car. Thus, the once-glamorous Packard was sold and pressed into livery service as a taxi cab, finished in red and yellow. It was subsequently abandoned at Ramey Air Force Base in Aguadilla, Puerto Rico, and from there was returned to the United States in the early 1960s.

It is believed that the car was imported by Patrick G. Young, an airman from Tilton, New Hampshire, who sold it on 27 August 1968 to Paul Baughman of Akron, Ohio, according to a copy of the original title.

Baughman contacted Ed Blend, who, as it turned out, had never lost his affection for Eleventh Series Packard Twelves, becoming one of the foremost authorities on the model. He would subsequently pen the definitive book on the subject, The Magnificent Packard Twelve of Nineteen Thirty-Four, self-published in 1971. Mr. Blend was thrilled to see the car that he remembered from his youth, and, remarkably, still had the drawing he had made of it in Pittsburgh – which, along with the LaCosta photograph, confirms the car’s original delivery configuration.

The drawing and photographs of the car in its “as-found” condition were both published in Mr. Blend’s book.

“Little is known about [the Baughman car],” Blend wrote, “but it does carry a Dietrich label, and Mr. Dietrich states the body is one he designed for Packard . . . A Factory [Individual Custom] Dietrich 4072 with LeBaron accoutrements fitted, most probably, at the factory experimental or old custom shop.”

Following Baughman’s ownership, the Packard was acquired by John Wheatley, a well-known restorer from Tulsa, Oklahoma, who kept it for nearly three decades, and began its restoration.

In 1996 it passed to another noted craftsman, Dale Adams, who continued the work before selling the car in 2012 to Joseph – himself a New Jersey Superior Court judge – and Margie Cassini. The Cassinis have owned many of the greatest American and European Full Classics, based on a careful philosophy of acquiring one or two at a time, carefully restoring them to their very best possible condition, and then showing them at the concours d’elegance that they so enjoy all over the country.

They are frequent Best of Show winners for a reason: only perfection is acceptable.

The Cassinis commissioned RM Auto Restoration to complete the car’s restoration. The body was properly finished in a seductively subtle charcoal hue, with a complementary leather interior in the original Dietrich style. All of the trim is correct to the car’s surviving period photographs, including the unique rear-mounted spares and “bumperettes,” and the car retains much of the original Dietrich body hardware with which it was delivered, as well as its original chassis, engine, and firewall tag.

Especially noteworthy are the dashboard-mounted radio and the chromed radiator shell, both of which were originally delivered with the car in 1934. Typical of an RM restoration, every detail is finished with jewel-like quality and precision, inside, outside, and underneath, forming a harmonious whole over 14,000 hours of craftsmanship.

At its completion, the Packard was premiered, as is the Cassinis’ tradition, at the 2013 Pebble Beach Concours d’Elegance. They were thrilled enough to see it awarded 1st in Class, in what is traditionally among Pebble Beach’s most strenuously judged and competitive classes.

However, it was then chosen and lined up as one of the Best of Show nominees . . . and, amidst a fanfare and cloud of confetti, chosen as Best of Show, the most prestigious honor in classic automobile collecting. Instantly it became not just one of the world’s most beautiful Packards, but perhaps the best known.

There are still numerous judging opportunities open to a new owner, including Classic Car Club of America competition and, of course, many other concours on both sides of the Atlantic, to which this Pebble Beach Best of Show winner would be very warmly welcomed. It is accompanied by photographic and written documentation of the restoration, including copies of period documentation, photographs, and correspondence, all documenting that the car was first delivered in its current configuration.

The overall appeal of this spectacular Packard is best neatly summed up by Joe Cassini, in the happy moments following his car’s Best of Show win at Pebble Beach.

Still caught in a moment of stunned, euphoric elation, he was asked by the late Ed Herrmann to describe his automobile as it stood.