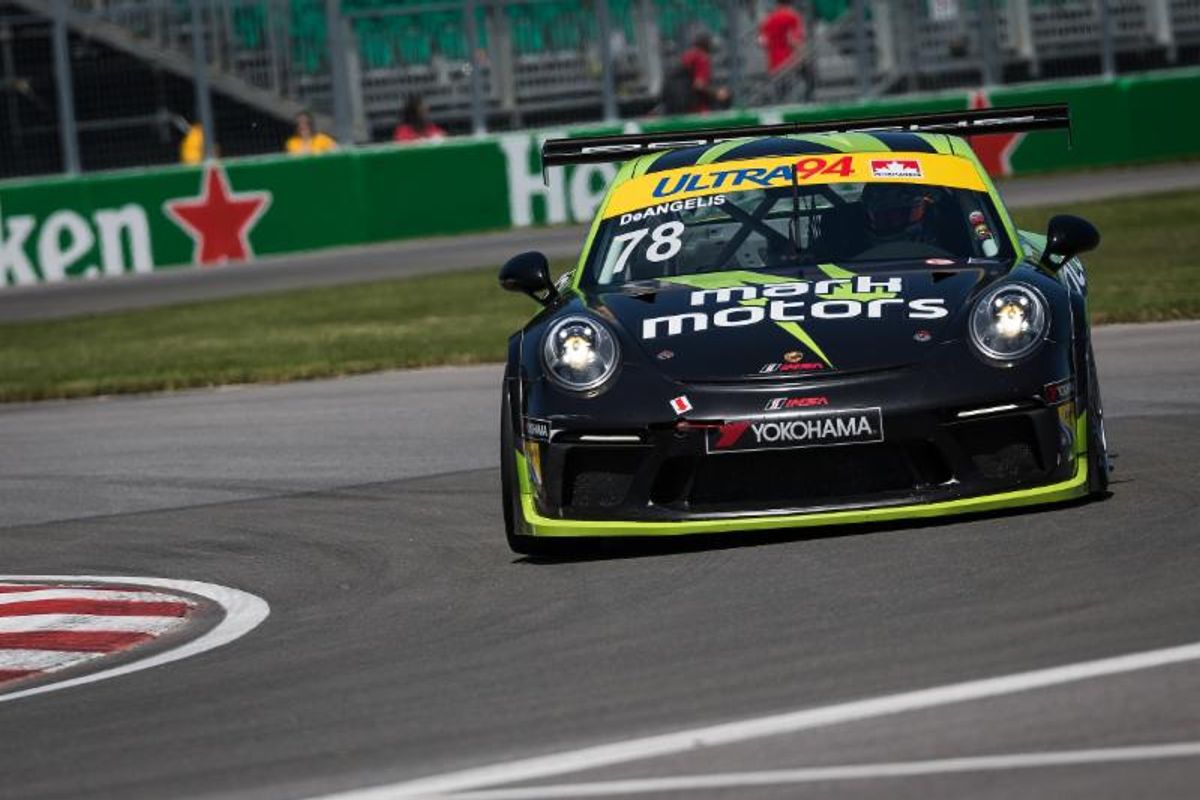 Setting the tone at the Canadian Grand Prix for the Ultra 94 Porsche GT3 Cup Challenge Canada by Yokohama was Roman De Angelis in the No. 78 Mark Motors Racing Porsche.

Across Friday's two practice sessions, De Angelis torched the Platinum Cup class charts with a best lap of one minute, 38.178 seconds (99.370 mph). The time was 1.034 seconds quicker than the second fastest lap time of the day, posted by fellow Mark Motors driver Zach Robichon in the No. 98 Porsche.

“That’s a good thing to be that much quicker,” De Angelis said after Practice 1. “But they’re going to close the gap, they’ve seen the data… To be honest, the lap didn’t feel that quick because this track is all over the place with curbs and stuff like that. I guess I put a good one together clearly and I’m just hoping we can pull that through for the whole weekend. We’ll see what happens.”

As hoped, De Angelis was able to keep his speed throughout qualifying on Friday evening, nabbing the pole position with a lap of 1:37.962 (99.589 mph) for Saturday’s Race 1 at 4:30 p.m. ET. Robichon will start alongside De Angelis in second, with Etienne Borgeat third in the No. 2 Lauzon Autosport Porsche.

De Angelis, just 17 years old, is no stranger to success in Montreal, having won both Gold Cup class races in 2017. However, De Angelis explains that moving up to the Platinum Class this year doesn’t have as much of an impact at Montreal as other tracks on the schedule.

“Really here, you don’t feel it that much,” De Angelis said. “A track like Mosport you do because it’s more high speed, so you can feel the car more. But here, it’s all curbs and braking so there’s not much of a difference when it comes to those two aspects. But yeah, hopefully we can have the same results.”

Each driver from Lauzon’s three-car effort this weekend at the Canadian Grand Prix in Montreal hails from Quebec and additionally, the Lauzon Porsche dealership is located less than an hour from Circuit Gilles Villeneuve.

Perhaps the Lauzon driver most eager to get the doubleheader weekend underway is Patrick Dussault, driver of the No. 77 Porsche. Dussault is coming off his best finish of the season – fourth place at Canadian Tire Motorsport Park, during which he also won the Yokohama Hard Charger Award for gaining the most positions during the 45-minute sprint race.

“Obviously (championship-leading team) Mark Motors is very strong, but I don’t see why we wouldn’t be that strong too,” Dussault said. “(We need to) just keep a good attitude, but also remain focused. Don’t focus on who’s doing what, just focus on ourselves. Momentum is not chance, it’s created by taking chances. For us, we obviously want to keep that momentum high, but it’s mainly focus.”

A Montreal-native, Dussault is very familiar with the circuit he’ll be racing on this weekend. In addition to winning the Formula Tour 1600 race at Circuit Gilles Villeneuve in 2015, he also frequents the track for recreation. The energy of racing alongside Formula 1 only adds to the meaning of this event for him.

“The track itself, just the atmosphere because it’s an F1 track,” Dussault answered for what he’s most looking forward to this weekend. “I jog the track and I cycle the track with my friends here so for me, it’s a habit to come here.

“It’s just the fact that we’re so lucky. I said to my girlfriend this morning when we came in, there’s 100,000 people here and (Porsche GT3 Cup Canada) is 13 of them, it’s us on the track. For us, it’s a major privilege and we’re very lucky to run this track this year.”

Dussault will start seventh in Race 1 on Saturday.

Two Races on Docket for the Weekend
With the conclusion of Friday’s on-track activities, the grid is set for the first Ultra 94 Porsche GT3 Cup Challenge Canada by Yokohama race on Saturday, June 9 at 4:30 p.m. ET. Ahead of Race 1, fans on site are able to attend the driver autograph session, beginning at 1 p.m., at the Yokohama Tire Service Center in the Porsche GT3 Cup Canada paddock.