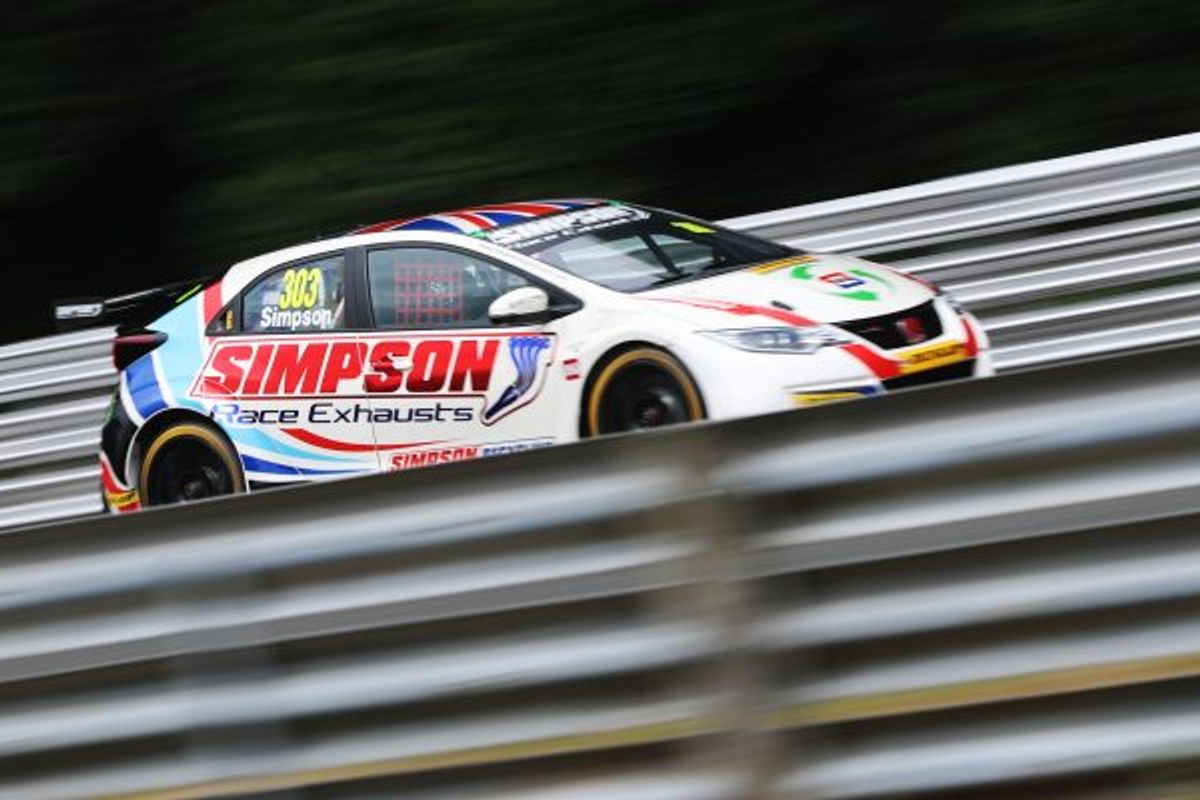 The Simpson Racing driver had already fired out a warning to the rest of the field after setting the pace in the final practice session, and he duly backed-up that showing by producing an incredible lap around the 2.23-mile picturesque Cheshire circuit.

Simpson’s early 1:25.750s lap time wouldn’t be matched during the 30-minute session and the man himself even had to recover from a slight off-track excursion whilst trying to eclipse his own benchmark.

Andrew Jordan was tipped by many to compete for pole position as both he and his ballast-free BMW 125i M Sport suit the circuit, but the BMW Pirtek Racing had to settle for fourth at the finish. The fast starting rear-wheel-drive machine is likely to be a contender come race day, however, and the trio in front will need to fend off Jordan’s likely advances in the early stages tomorrow.

WIX Racing with Eurotech claimed sixth and seventh in the hands of Jack Goff and Brett Smith respectively, completing a perfect day for the team that also runs Simpson’s pace-setting Honda.

Team BMW’s Colin Turkington and Ciceley Motorsport’s Tom Oliphant completed the top ten positions, with the latter producing his best effort during a wild ride in the closing minutes.

The top three drivers in the overall standings failed to make the top ten, highlighting both the ultra competitiveness of the series and also how success ballast can take it toll around the twisty and undulating circuit. Championship leader Adam Morgan could only manage 19th on the grid, whilst Josh Cook and Tom Ingram will start race one from 20th and 17th respectively. Such is the high calibre of the 2018 field that the top 24 cars were separated by less than a second.

A huge crowd is expected to descend on Oulton Park tomorrow with many more watching the action live on ITV4. The BTCC triple header and all of the supporting races will be screened by the giant UK television network from 1115.

Matt Simpson said: “I can’t believe it. I’ve been waiting for that for as long as I’ve been watching touring cars. I knew we could do it after that time in Free Practice 2 but the pressure was on there. When my team said I was 0.4 seconds ahead of Sam (Tordoff) in first, I couldn’t believe it as that’s an age in touring cars. I just can’t thank everyone enough for this – my family, my sponsors and the team. I had a little off after that lap and hit the barrier. I lost the brake pedal as I overdid it with the slightly softer pads I like – they give me better modulation through the pedal and I’d just overcooked it a bit. I joked on the track walk yesterday that I’d never started on the flat here, I’ve always had to go up hill. With the soft tyre on, the ideal tyre, we’re looking good and it gives me a good chance tomorrow. It really is a dream come true.”

Sam Tordoff said: “It’s been a very good day. We had to work hard for that one. The car is nervous and on the edge over one lap in qualifying trim. It’s been difficult and I’d already been in the fence at Druids this morning. It’s harder to drive right on the limit over the lap but hopefully over a race distance at 99 percent it’ll be a bit kinder. All credit to Matt (Simpson) for that very quick lap and we never thought we were fighting for pole after that. Credit to our boys and girls too – second and third – we can’t argue with that.

Tom Chilton said: “It was so close at the top there and I love the championship because of it. I see Andrew Jordan’s in fourth just behind me, and we’re joint on points so it’ll be a big old fight there. For sure, we’re going to have to change our setup as we had a qualifying one on. Hats off to Matt Simpson with that lap – he’s worked so hard and worked his way right up to the top. I’m so happy for him. I’m happy for my team too. We’ve got all three of our cars in the top eight. We’ve put in 110 percent over the last few weeks and it’s paying dividends now.”