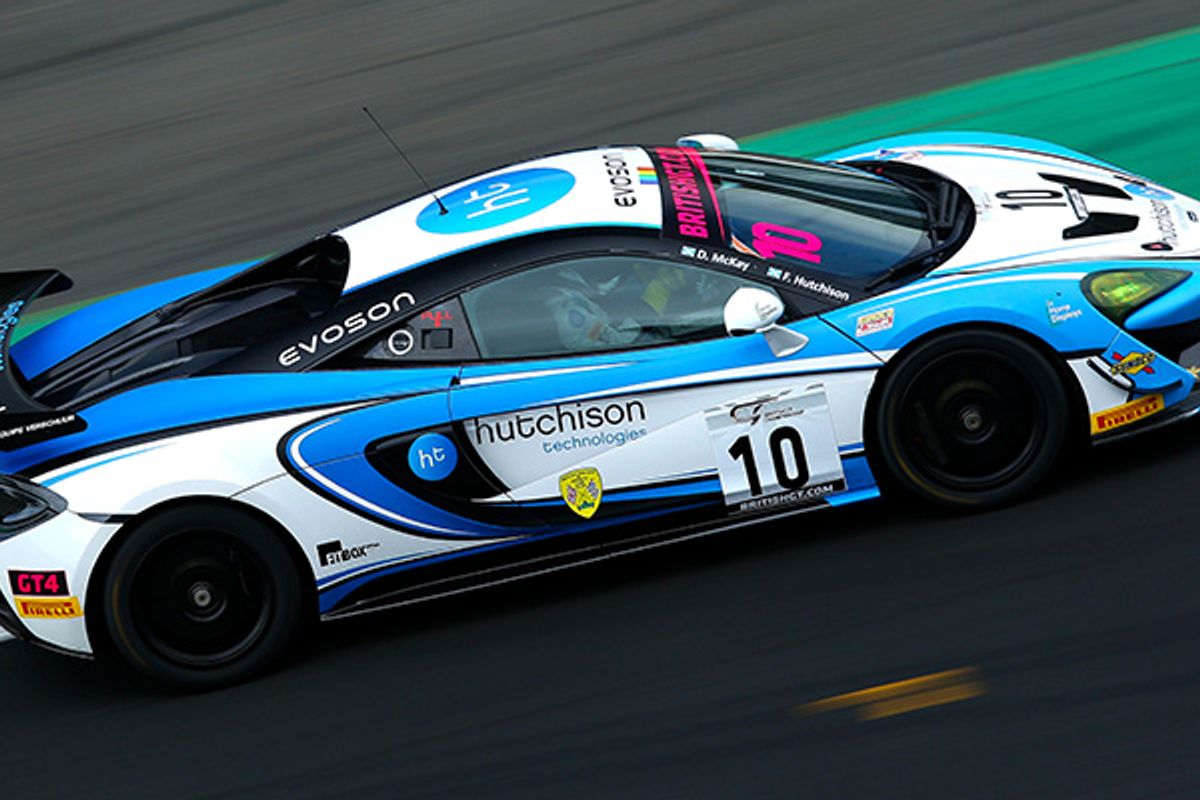 TF Sport couldn’t quite take its third GT3 pole in as many attempts but Mark Farmer and Nicki Thiim were still content with a place on the front row ahead of Jetstream Motorsport’s Graham Davidson and Maxime Martin.

The last GT3 pole position for a Silver crew also came at Silverstone 12 months ago, but this time it was all about RJN, Nissan, Ricardo Sanchez and Struan Moore who each claimed their maiden poles thanks to a supremely consistent performance.

Former GT Academy winner Sanchez, making his British GT debut this weekend, set the ball rolling in the opening session against the class’ Am contingent. Mark Farmer, who took an individual pole last time out at Snetterton, came closest to toppling the Mexican after lapping within 0.7s, while Rick Parfitt Jnr’s Team Parker Bentley was another 0.2s further back.
Graham Davidson, Andrew Howard and Ian Loggie completed the provisional top-six.

Sanchez’s natural advantage over the Am drivers in Q1 is balanced by the extra ballast carried by Silver crews, which would make it tougher for Moore in the second session. However, a marginally faster time than his main rival – Farmer’s co-driver Nicki Thiim – helped the GT-R extend its advantage in the final standings to 0.714s.

Instead of challenging for pole, TF Sport only just held on to second after Jetstream’s Maxime Martin lapped 0.5s faster than his AMR stablemate. Just 0.010s separated the two Aston Martins on the combined timesheets, while Callum Macleod’s rapid effort helped the #7 Team Parker Bentley vault from eighth to fourth.

Team ABBA Racing’s Mercedes-AMG also picked up a couple of places thanks to Adam Christodoulou who lowered his own British GT3 qualifying lap record at Silverstone to 1m59.095s. Ryan Ratcliffe finished sixth in the second Team Parker Bentley he shares with Parfitt Jnr, Optimum’s Jonny Adam and Flick Haigh were seventh, and Howard and Darren Turner finished eighth in the Beechdean AMR V12 Vantage.
Championship leaders Lee Mowle and Yelmer Buurman start 12th, the same position from where they won at Rockingham earlier this season.

A team admin error denied Equipe Verschuur its first British GT4 pole on debut at Oulton Park earlier this year, but there was no mistake at Silverstone where Finlay Hutchison and Daniel Mckay were comfortably fastest in the combined qualifying times.

Hutchison was the only driver to break the 2m12s barrier in Q1 where his primary opposition came from Matthew George whose Generation AMR Aston Martin lapped 0.2s shy of the pace-setting McLaren, while Academy Motorsport’s Will Moore was another half-a-second further back in third
.
Ben Green’s Century BMW, the second Academy Aston Martin of Tom Wood, and Lewis Proctor’s Tolman Motorsport McLaren completed the top-six at the halfway mark.

George’s decision to race two cars this weekend meant his Am co-driver James Holder would be up against the Pros in the second session. That effectively gave Verschuur’s duo a 0.7s head-start against their nearest Silver Cup opposition, an advantage Mckay was unlikely to squander.

Indeed, the Scot extended the pair’s lead in the final reckoning to 0.893s over Jan Jonck, who moved the Academy Aston Martin he shares with Wood up three places to secure a place on the front row.
There was also an impressive all-round performance from Fox Motorsport’s Mark Murfitt and Michael Broadhurst who claimed Pro/Am pole and third overall aboard their Mercedes-AMG. Murfitt was fastest of the Am drivers and seventh overall in Q1 before Broadhurst set fastest time of the day and a British GT4 qualifying record in the second session.

Fourth went to Matt Nicoll-Jones and Moore’s Academy Aston Martin, the pair finishing 0.019s shy of third in the combined classification, while Ben Tuck and Green’s Century BMW was only 0.015s further back in fifth.

Nick Jones and Scott Malvern’s Team Parker Mercedes-AMG completed the top-six ahead of Jordan Albert and Proctor’s McLaren and the first of Steller Motorsport’s Toyotas driven by Sennan Fielding and Tom Cannan.

DRIVER QUOTES
Struan Moore, RJN Motorsport #24 Nissan GT-R NISMO GT3: “We’re all really chuffed. Obviously it’s my first time racing with Ricardo [Sanchez] in British GT, so to get the pole together is pretty special, and especially as it’s with the older-spec Nissan GT-R. It’s been a difficult start to the year so to come here and put that right feels good. Now we need to finish the job tomorrow.”
Finlay Hutchison, #10 Equipe Verschuur McLaren 570S GT4: “The car was perfect – I couldn’t fault it! This is the first time since Oulton Park that, as a team, we’ve maximised everything, and that Dan and I have managed to pull something out of the bag. I think this is his first endurance race so it’ll be a bit different to what we’re used to tomorrow.”

Jonathan Wells, Pirelli UK motorsport manager: "The Silverstone race is one of the most interesting from a tyre perspective, with the three-hour format providing more options to the teams in terms of strategies. Silverstone is also usually one of the most demanding circuits on the calendar for the tyres thanks to the many fast corners. However, the new smoother surface has reduced wear and degradation rates, as we discovered at the recent Blancpain GT Series event with the same P Zero DHD2 tyres that we supply in British GT3."
LAP RECORDS
GT3 - 2m02.376s - Callum Macleod - Team Parker Racing - Bentley Continental - 2017
GT4 - 2m14.031s - Joe Osborne - Tolman Motorsport - McLaren 570S - 2017