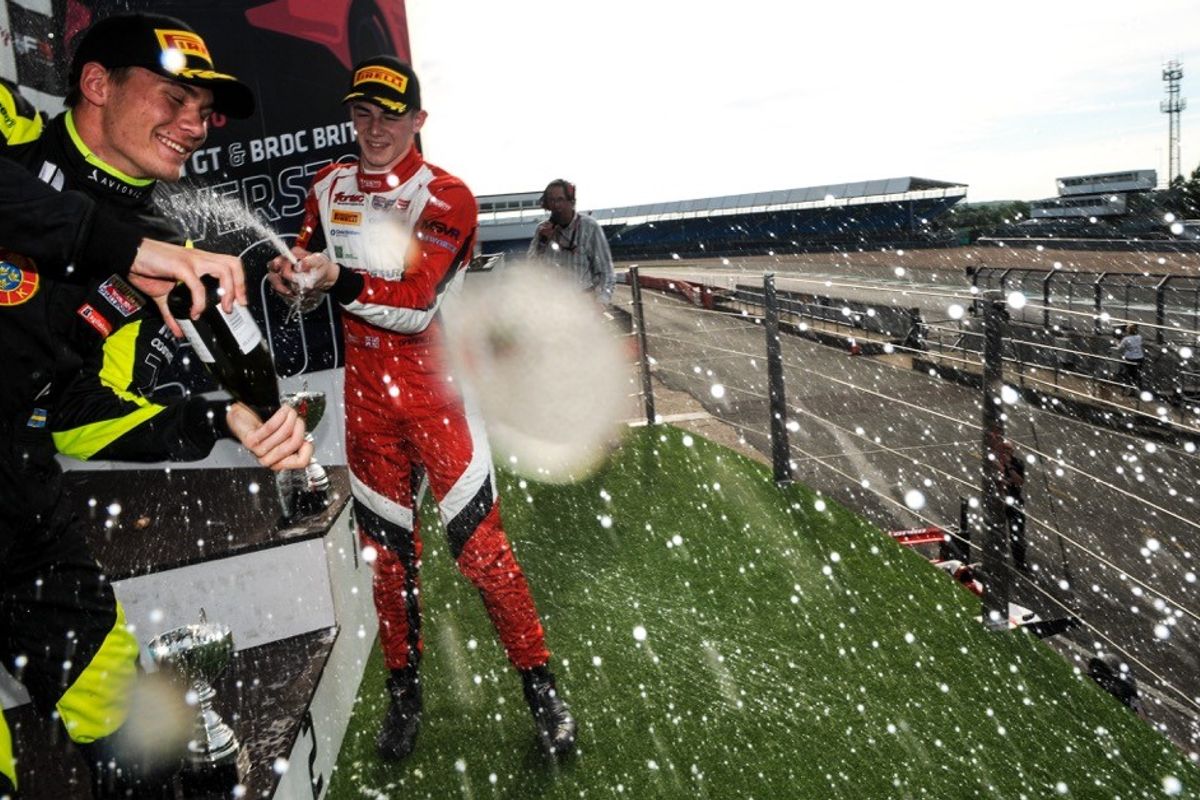 Double R Racing's Pavan Ravishankar and Fortec Motorsports driver Tom Gamble were the race winners on the second day of action at Silverstone, while championship leader Linus Lundqvist extended his championship lead further with a podium in race three, as the 2018 championship reached its half-way point.

Ravishankar's victory in this morning's second contest of the weekend came after a commanding performance from pole position, and was his first British F3 podium as well as his maiden victory, while Gamble made a decent start from the front row of the grid and then pulled out a gap in race three to claim his second victory of the year.

Lundqvist's championship lead is now up to 56 points over nearest rival Nicolai Kjaergaard, with the Swede following up his win in race one yesterday with a sixth place from 17th on the grid in race two, and then second in race three.

Race two
Ravishankar claimed his maiden BRDC British F3 race win in the second event of the weekend at Silverstone this morning. The Singaporean started from pole for Double R Racing and took full advantage to stretch out a comfortable lead, with Carlin's Sun Yue Yang second and Fortec's Gamble taking third.

Kjaergaard gained eight places from his starting position to secure fourth ahead of Tristan Charpentier, with race one winner Linus Lundqvist making up 11 places from 17th on the grid to take sixth. Billy Monger, Jordan Cane, Jamie Chadwick and Sasakorn Chaimongkol completed the top-10.

Ravishankar made a good start from pole to lead into Copse on the first lap, while Arvin Esmaeili initially held second place after climbing from third on the grid with Charpentier holding third. There were good starts also for Kjaergaard who gained four places on lap one to run eighth, and championship leader Lundqvist, who climbed to ninth. Further back there was trouble for race one podium finisher Kush Maini at Village, which relegated him to the back of the field while Manuel Maldonado, who had made a good start, spun at Luffield, forcing him to pit.

Ravishankar's lead at the end of lap one was 0.8s, a margin he extended to 1.9 seconds on lap two with Esmaeili holding off the attentions of Yang in third. By lap three Yang had found his way past the Swede, but by this time, Ravishankar had a lead of 3.4 seconds. Charpentier and Gamble also found their way past Esmaeili, with Kjaergaard and Lundqvist rising as a pair to sixth and seventh, with Jusuf Owega and Krishnaraaj Mahadik pitting, with Mahadik having a broken front wing and Owega a rear puncture, the pair having been sixth and seventh at the time.

Up front, Yang slightly narrowed the gap to 2.8 seconds starting the penultimate lap, but Ravishankar was able to pull the gap out once more to take his maiden win and his first British F3 podium by 3.4 seconds, while Yang's podium was also the first for the Renault Sport Academy driver.

Charpentier held third until Gamble and Kjaergaard found their way past on lap eight, with the Frenchman then having to fend off the attentions of the charging Lundqvist, who finished 0.445s behind in sixth.

Monger made good progress from 10th on the grid to secure seventh. The Carlin driver had fallen to 12th on the first lap, but a series of overtakes propelled him well into the top-10 and half a second ahead of Cane, with Chadwick rising from 13th to take ninth and Chaimongkol completing the top-10 for Hillspeed.

Race three
Fortec Motorsports driver Gamble claimed his second win of the season with a dominant display in the third race at Silverstone. He claimed the flag by over two and a half seconds from championship leader Lundqvist, while pole sitter Maini had to settle for third.

Kjaergaard was fourth for Carlin, half a second ahead of Cane, with Clement Novalak sixth. Manuel Maldonado, Jusuf Owega, Tristan Charpentier, and Krishnaraaj Mahadik completed the top-10.

At the start, it was Gamble who had the best get away from second place on the grid, with Maini dropping to second. Maini attempted to fight back at Maggots and Becketts, with the pair side by side. During the encounter, Maini ran off track and surrendered second place to Lundqvist, who climbed from fourth to second by the end of the first lap.

From there Gamble controlled the race, with the Brit leading Lundqvist by almost a second at the halfway stage, a gap which increased to 1.5 seconds on lap six, almost two seconds by lap seven, and 2.5 by the chequered flag, claiming his second victory of the year in the process.

A fighting drive from Kjaergaard saw him climb two places in the early stages, and then fought off the attentions of Douglas Motorsport's Cane, though he slips a little further behind Lundqvist in the championship battle.

Novalak pipped Maldonado to sixth by just 0.253s, while Owega was only half a second ahead of Charpentier for eighth, with Mahadik further back in 10th and just holding off race two podium finisher Sun Yue Yang by 0.443s. Race two winner Pavan Ravishankar claimed 12th, less than a second further back, while Jamie Chadwick fought back from an incident early on with Billy Monger to claim 13th, having been last at the end of the first lap. Chadwick was 0.6s behind the Singaporean at the flag, and 0.2s clear of Sasakorn Chaimongkol.

Arvin Esmaeili was 0.789s further back, with Ben Hurst 16th and ahead of Billy Monger who pitted after his first lap incident and rejoined some way behind the field.

Driver quotes:
Pavan Ravishankar: "I had to get a good start and on the first few laps I pushed as hard as I could to get a gap. The guys behind me were fighting which definitely helped me get a gap and once we got mid-race I realised I had a big gap, so I was able to control the race from there. At a level like this it's my first win and it means a lot. As I crossed the line I felt a lot of happiness and joy, but I think it will take a while to sink in."

Tom Gamble: "I knew it was going to be a case of getting him [Maini] off the line, that was going to be the easiest way to lead it. I managed that and then it was just a case of putting in consistent fast lap times throughout the whole race, it felt like a qualifying session, just trying to get the quickest laps we could. I could see at the start he [Lundqvist] was coming at me and I had to up my game. In the latter half of the race I was putting in quick lap times and managed to bridge a bit of a gap which was fantastic."

Linus Lundqvist: "It's been a very solid weekend for us. Getting our first qualifying pole of the year felt good and then the race win after that, and then a solid race two and now a second place in race three. A big thank you to my team, especially my engineer Ash and my mechanic Rick who have done a brilliant job this weekend, and we leave here with a bigger championship lead which feels good."

The next rounds of the BRDC British F3 Championship take place at Spa Francorchamps in Belgium on 21-22 July.