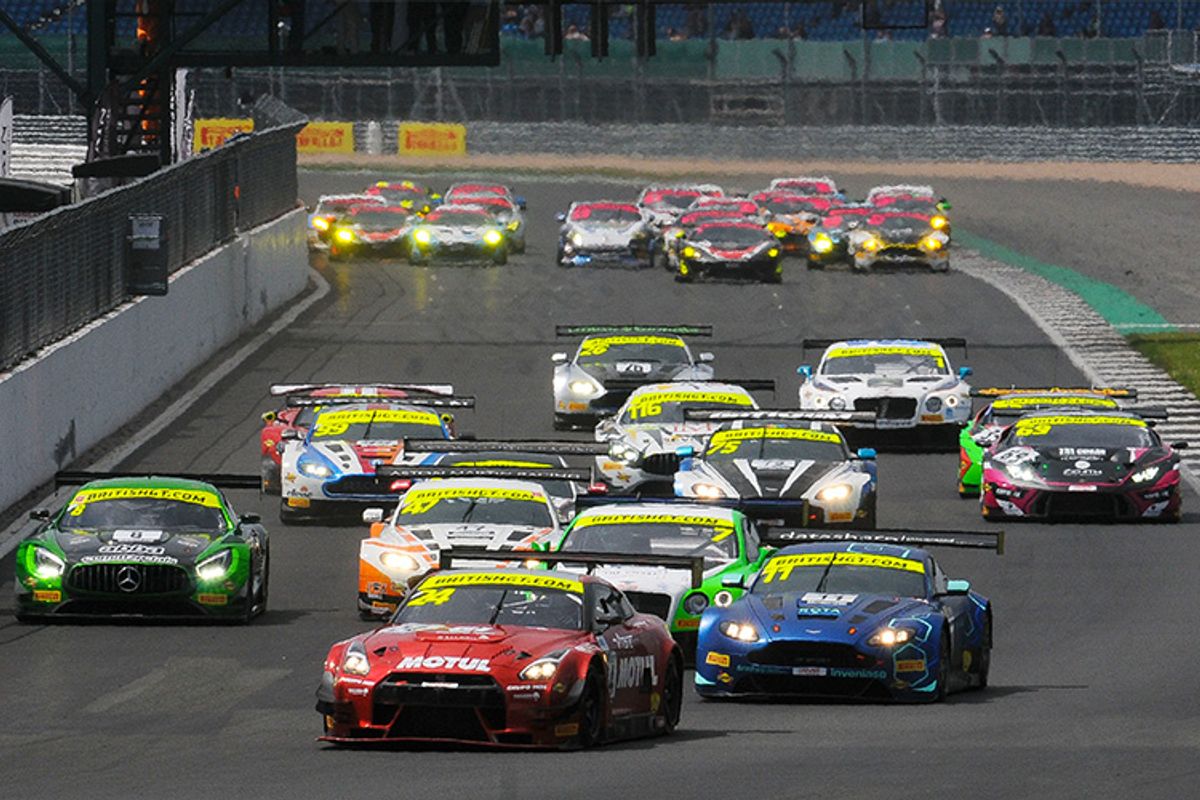 GT4’s podium was completed by Tolman Motorsport’s Jordan Albert and Lewis Proctor as well as Academy Motorsport’s Will Moore and Matt Nicoll-Jones whose third place was reinstated post-race when Patrik Matthiesen was adjudged to have gained an unfair advantage when passing the Aston Martin at the final corner on the last lap.

Mark Farmer and Nicki Thiim picked up their second victory and third podium in as many races to vault into championship contention at Silverstone after recovering from a spin and overcoming a 10s success penalty.
The Aston Martin was running second behind Ricardo Sanchez’s RJN Motorsport Nissan when Graham Davidson spun Farmer around at Maggotts in the opening stint, for which the Jetstream Motorsport driver was handed a stop/go penalty. That gave Sanchez a 16s lead before the first pitstops began after 60 minutes.

TF Sport’s decision to swap Derek Johnston with Marco Sorensen early helped the #17 Aston Martin jump ahead in the second hour, while Sanchez’s co-driver Struan Moore dropped into the clutches of the chasing pack after his seat mechanism slipped backwards, shifting his feet away from the pedals. The resulting early pitstop to rectify the issue effectively ended the pole-sitters’ hopes.

At the same time Thiim was making progress back through the field and moved into third behind Sorensen and Phil Keen when Adam Christodoulou’s Team ABBA Racing Mercedes-AMG retired with front suspension damage. Stopping later then helped the Dane inherit a lead that Farmer would retain when the second round of driver changes shook out.

However, the race was far from over thanks to the crew’s 10s success penalty for finishing third at Snetterton, which would be served at the final mandatory pitstop. Farmer pitted with exactly that advantage over Jon Minshaw, and when the Barwell Lamborghini followed TF Sport’s V12 Vantage in on the same lap it became a battle between mechanics and the stopwatch. Thiim then narrowly beat Keen off pit road and, with it, retained a lead he wouldn’t relinquish.

Fourth should have gone to last year’s winners Rick Parfitt Jnr and Seb Morris who were reunited aboard Team Parker Racing’s Bentley as a result of Ryan Ratcliffe being taken ill with food poisoning this morning. So late was the call that Morris didn’t arrive at Silverstone until five minutes before his first stint began, by which time Parfitt Jnr had twice charged through from the back of the GT3 field after starting last – a penalty for changing drivers during the event – and then spinning mid-stint. However, the pair’s efforts were stymied by Morris’ yellow flag infringement, which resulted in a post-race two-place penalty.

Moore and Sanchez were also left to rue what might have been but still achieved RJN and NISMO’s best result of the season with fifth on the road and fourth in the final classification after finishing just 0.4s ahead of Johnston and Sorensen, whose 20s success penalty for winning at Snetterton took them out of podium contention. Nevertheless, the Dane’s pursuit of Moore over the final stint saw him claim a new GT3 lap record – 1m59.725s – and third-straight Sunoco Fastest Lap Award.

Team Parker Racing’s 2am finish on Saturday morning, the result of removing one car’s engine to rectify an oil issue and taking the whole front end off the second Bentley, saw it named PMW Expo Team of the Weekend, while Minshaw’s fault-free run from 12th to second helped him win the Blancpain Driver of the Weekend Award.

An absorbing GT4 race eventually went the way of Century’s Aleksander Schjerpen and Jack Mitchell who moved into contention before the final driver change and then benefitted from the team’s sister BMW serving a 20s success penalty for winning at Snetterton.

Their victory also owed much to Equipe Verschuur’s bad luck, which saw pole-sitters Finlay Hutchison and Daniel Mckay retire with front suspension failure while leading by 35s at the start of the final hour.

That handed Ben Green and Ben Tuck the lead after the duo had worked their way up from sixth on the grid. However, their advantage over team-mate Schjerpen – who fought back from 13th after the first 30 minutes – wasn’t enough to overturn the full pitstop success penalty, which dropped them to a net third at the start of the final stint.

Meanwhile, late stops for Matthew George and Callum Pointon helped Mitchell inherit a 17s lead, which he extended by a further 10s over the closing stages thanks, partly, to setting a new GT4 lap record – 2m12.263s – and, with it, claiming the Sunoco Fastest Lap Award.

Two of Tolman Motorsport’s three McLarens retired through separate incidents, but its third – shared by Jordan Albert and Lewis Proctor – was the model of consistency en route to second despite carrying a 15s success penalty. Proctor’s incredible start helped the #5 570S leap from seventh to first, which became second by the time Hutchison had recovered after a slow getaway. There they remained throughout the race despite the various strategies moving others ahead and then behind.

Further back, the battle for the last step on the podium came down to the final laps. Tuck initially held the upper hand but eventually lost out to Matt Nicoll-Jones, whose Academy Motorsport Aston Martin he shares with Will Moore remained a top-five fixture all afternoon. Nicoll-Jones looked to have settled the matter with three laps to go, but the battle had also brought Patrik Matthiesen into play, and after the Dane dispatched Tuck at the same corner one lap later, the race was on for third. The HHC driver’s subsequent move at Luffield, which included contact with the Aston Martin, set up a grandstand run to the line. And although the Ginetta crossed it first, the positions were ultimately reversed post-race.

Tuck and Green finished fifth, while Jan Jonck and Tom Wood’s retirement with just five minutes remaining helped UltraTek Racing RJN Motorsport’s Pro/Am winners Kelvin Fletcher and Martin Plowman complete the top-six. Fletcher’s performance in the opening stint against the Silver-graded drivers particularly caught the eye, while Plowman was as rapid as ever in his pursuit of sixth over the final hour.

George and his Generation AMR co-driver James Holder led the Pro/Am class until a late drive-through penalty dropped their Aston Martin behind Plowman and Fletcher, but they still finished seventh overall on a one-off GT4 outing together. George was also scheduled to drive the #44 Invictus Games Racing Jaguar before Paul Vice retired from the race early.
HHC’s second Ginetta of Will Burns and Mike Newbould, plus Team HARD’s two G55s, completed the top-10.

DRIVER QUOTES
Mark Farmer, #11 TF Sport Aston Martin V12 Vantage GT3: “I’m not sure how we did that! The race pace was good, we weren’t making any mistakes and the car was behaving itself, but the main thing was TF Sport playing a blinder on the strategy. We knew we had good pace, but we also knew it would be tough to overcome our success penalty without factoring in the shunt as well! I’d written it off after the first stint! It’ll be even more difficult at Spa with the 20s penalty - we saw what that did to Marco [Sorensen] and Derek [Johnston] today.”

Aleksander Schjerpen, #43 Century Motorsport BMW M4 GT4: “It didn’t look good after the first lap – I think we were down to 16th or something! We had to work hard – Jack did a great job in his second stint, the BMWs were flying out there and Century did a great job in the pitstops. I was close to my qualifying times in the second stint before handing over to Jack, who set fastest lap of the race. So all in all it’s been a great day.”