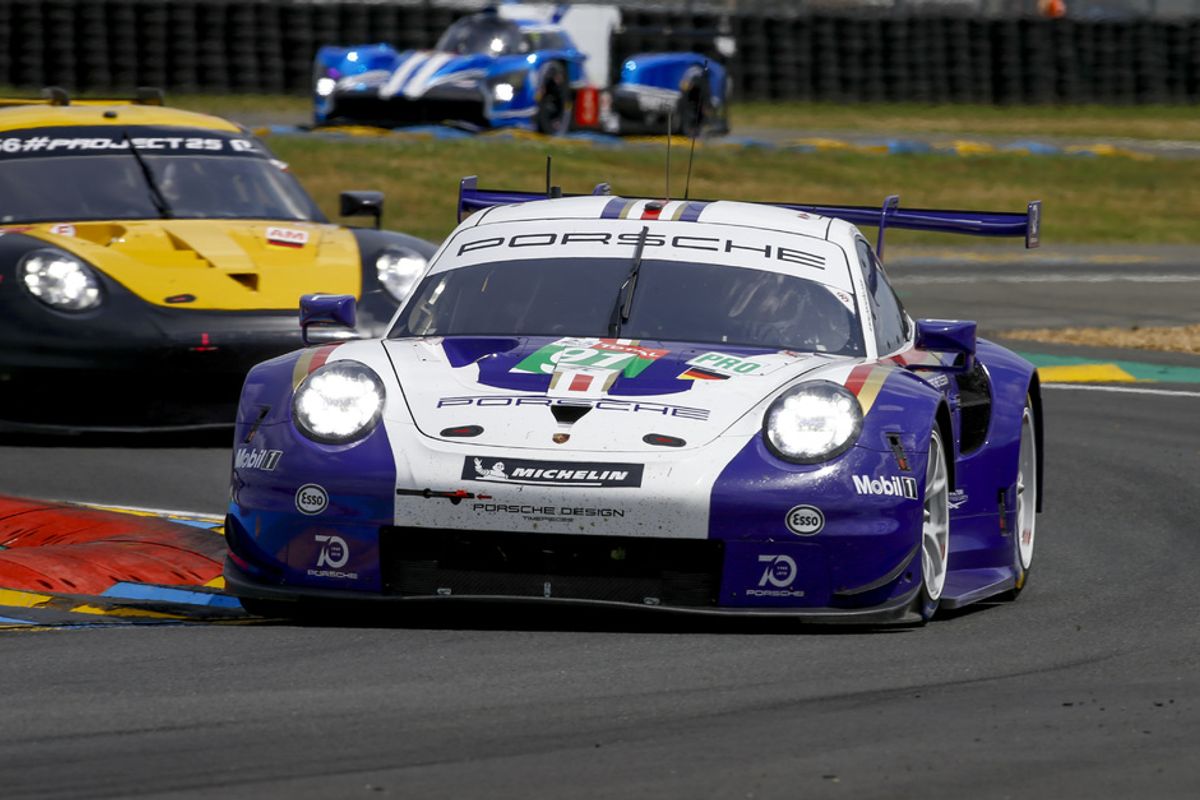 Porsche tackles the 86th edition of the Le Mans 24 Hours with the largest GT works contingent in the history of the company. The two Porsche GT Teams will field four of the Porsche 911 RSR at the classic on 16-17 June on the Circuit des 24 Heures in France. The works squad travels to round two of the FIA Sports Car World Endurance Championship (WEC) as the leader of the Manufacturers’ Championship. In the 60-strong field, four customer teams campaign six additional ca. 510 hp 911 RSR from Weissach. In the GTE-Pro and GTE-Am class, the Porsche 911 RSR clocked the fastest lap times at the test day on 3 June.

The race
The 24 Hours of Le Mans, regarded as the toughest automobile race in the world, enjoys a long and illustrious tradition. Initiated in 1923 as the Grand Prix d’Endurance de 24 Heures, Porsche first took on the challenge of the world’s largest motorsport event in 1951. Legendary corners such as Mulsanne and Tertre Rouge and chicanes flow into high-speed passages like the Mulsanne Straight. Adding to the legend is the fact that the 13.626-kilometre course is a combination of permanent racetrack and everyday national roads. Even Hollywood has paid tribute to the race with the 1971 film “Le Mans” featuring Steve McQueen in the lead role.

The Porsche 911 RSR
For the Porsche 911 RSR, 2018 marks the second outing at the long-distance race. In its 2017 debut season, the race car from Weissach narrowly missed out on a podium spot, finishing fourth at the Le Mans 24 Hours. Depending on the restrictor, the water-cooled four-litre flat-six engine puts out around 510 hp. The newly developed race car celebrated its premiere in 2017 at the 24 Hours of Daytona. A large rear diffuser combined with a top-mounted rear wing generates high downforce and provides aerodynamic efficiency.

Live on TV and in the Internet
Eurosport 1 broadcasts round two of the World Endurance Championship live and free-to-view. The TV channel also airs the free practice and qualifying sessions. These live broadcasts are supplemented by background reports and race analyses by Le Mans record winner Tom Kristensen, who utilises virtual tools to present and explain the race action. Sport1 televises highlights of the endurance race in a 60-minute programme on Monday, 18 June, from 23.00 hrs. This sports channel also provides online clips of the race at www.sport1.de.

Comments before the race
Dr Frank-Steffen Walliser, Vice President Motorsport and GT Cars: “With the changes to our strategy announced last year and the withdrawal from the LMP1 programme, we’ve also promised to expand our involvement in GT racing. This year’s Le Mans is definitely the highlight, which is obvious by the number of vehicles competing. With a total of ten Porsche 911 RSR, we’re witnessing one of the largest GT line-ups ever. Our cars represent 30 percent of the entire GT field, and we’re very proud of this. We’re anticipating a very exciting race, particularly in the GTE-Pro category. Seventeen vehicles from six manufacturers with top drivers will go head-to-head at Le Mans. We’re better prepared than ever before and after our great results at Spa, our successes in the USA, and especially at the Nürburgring, we’re heading to Le Mans feeling confident.”

Pascal Zurlinden, Director GT Factory Motorsport: “The 24 Hours of Le Mans is a legendary race, and the history of Porsche is closely linked to it. We want to follow in these big footsteps and be as successful as possible. The key to success at a long-distance event is to still be capable of attacking in the final stages.”

Gianmaria Bruni (Porsche 911 RSR #91): “2018 is a very special year for Porsche because we’re celebrating 70 years of Porsche sports cars. With this being my first time contesting the Le Mans 24 Hours for Porsche it’s also an exciting experience for me. We kicked off the WEC season at Spa very competitively. I can hardly wait to drive again at Le Mans.”

Richard Lietz (Porsche 911 RSR #91): “The setup of our 911 RSR for Spa was outstanding. Unfortunately, the strategy was influenced by the safety car phases. But at Le Mans, we have 24 hours until the flag drops and more tyres at our disposal to fight for the podium.”

Frédéric Makowiecki (Porsche 911 RSR #91): “Le Mans is the ultimate highlight for many drivers. But for me as a Frenchman, this is the most important race. I’m determined to win this race once in my career. To be amongst the leaders you need a high top speed on this racetrack. Last year we were on track for a podium result until a puncture threw us out of contention an hour before the finish.”

Kévin Estre (Porsche 911 RSR #92): “I’m looking forward to my fourth Le Mans 24-hour race, not least because many of my family members will be there. It’s very emotional to line up on the grid and hear the French national anthem. No other race gives a driver such a feeling.”

Michael Christensen (Porsche 911 RSR #92): “The race and the track have an incredible history. This makes Le Mans an extraordinary race. It’s vital to maintain your focus during the entire time. The straights and particularly the Porsche Curves are important because you’re driving at high speed in these passages. For me, the feeling of driving at Le Mans is unparalleled.”

Laurens Vanthoor (Porsche 911 RSR #92): “Le Mans is unquestionably the highlight of the year. The big goal is to secure another win for Porsche. The factory is campaigning four 911 RSR – I think this underscores our intention. It’s an important race for us all. As such, there’s a lot of pressure to perform well. That’s precisely our forte. We’re well prepared.”

Patrick Pilet (Porsche 911 RSR #93): “I live in Paris only 200 kilometres away, which makes Le Mans my home race. I’m excited to compete with Nick Tandy and Earl Bamber and I’m certain that we’ve put a good package together to win this race. At the test day we were already able to score the fastest lap time.”

Earl Bamber (Porsche 911 RSR #93): “I can’t wait to return to Le Mans. It’ll be really exciting, especially after our LMP1 win for Porsche in 2017. Fielding four 911 RSR is a big challenge for the factory. My aim is clear: I’m going for the podium. I’m looking forward to competing at the world’s biggest race with my team from the IMSA Championship.”

Nick Tandy (Porsche 911 RSR #93): “Le Mans is a very special race for me, of course. I’ve always raced for Porsche here and I look forward to competing in the GT class again this year. There are a lot of cars in the GTE-Pro class and it’ll be hotly contested. The entire team can hardly wait for the long-distance race to start.”

Timo Bernhard (Porsche 911 RSR #94): “Last year’s overall victory will be hard to beat, of course. Back in 2002 I actually won the GT class. As two-time outright winner it’s wonderful to return to Le Mans, to fight again for victory, and to meet up with old friends.”

Romain Dumas (Porsche 911 RSR #94): “This will be my first Le Mans race in a GT car since 2013, and I’m looking forward to it. The GTE-Pro grid has never been this competitive. It’s important to focus on our job and not think about the opposition. We’re simply driving our race. I’m sure we’ll do a good job.”

Sven Müller (Porsche 911 RSR #94): “In 2015 I got the chance to turn a few laps during the pre-test. I even got goose bumps doing that. I’m looking forward to that feeling at my first outing here as a regular driver. We went testing at Spa and Monza with my teammates and our engineer and we managed to try out all the tyres. With my race at Le Mans, a dream comes true.”

Jörg Bergmeister (Porsche 911 RSR #56): “I’ve contested Le Mans every year since 2002 with one exception. Fortunately, nothing of the unique atmosphere has changed by now. The race is just as popular as ever. The butterflies start about two weeks before the race, and the tension continues to mount until the start on Saturday.”

Julien Andlauer (Porsche 911 RSR #77): “Driving at Le Mans is a dream come true. Last year I contested the Porsche Carrera Cup France before the 24-hour race took off. It’s an incredible and storied racetrack. For me it’s extremely helpful that I already know the circuit, which paid off with the fastest lap time in the GTE-Am class.”

Christina Nielsen (Porsche 911 RSR #80): “This will be my third time at Le Mans, but my first with Porsche. The 911 RSR is not at all like the 911 GT3 R that I drive in the IMSA Championship. I must admit, I love the RSR. The tests with Ebimotors have gone very well so far and we’re heading to France feeling optimistic.”

Michael Wainwright (Porsche 911 RSR #86): “Getting used to a new race car is always a challenge. But at Spa the 911 RSR has given us confidence. Given that most of the Le Mans racetrack is driven at full throttle and we reach high speeds, aerodynamics plays a critical role here. The Indianapolis corner and the Porsche Curves are particularly challenging.”

Matteo Cairoli (Porsche 911 RSR #88): “It’s a dream of mine to finish on the podium at the 24 Hours of Le Mans. I’m particularly looking forward to the night time, because I like driving in the dark and I enjoy every second. You have to stick to your racing line and you mustn’t allow yourself get distracted by the lights of the faster LMP cars.”

Patrick Long (Porsche 911 RSR #99): “This is my 15th Le Mans race in a row. I’m really proud of this. We’re competing with an experienced team and good drivers. It’s particularly important to strike a balance between the action on the racetrack and the rest breaks. I’d like to show the rookies in particular how important it is to make as few mistakes as possible at this race. American fans love this race. They know Le Mans from Steve McQueen’s movie with the same name and they make the trip here to fulfil a dream.”