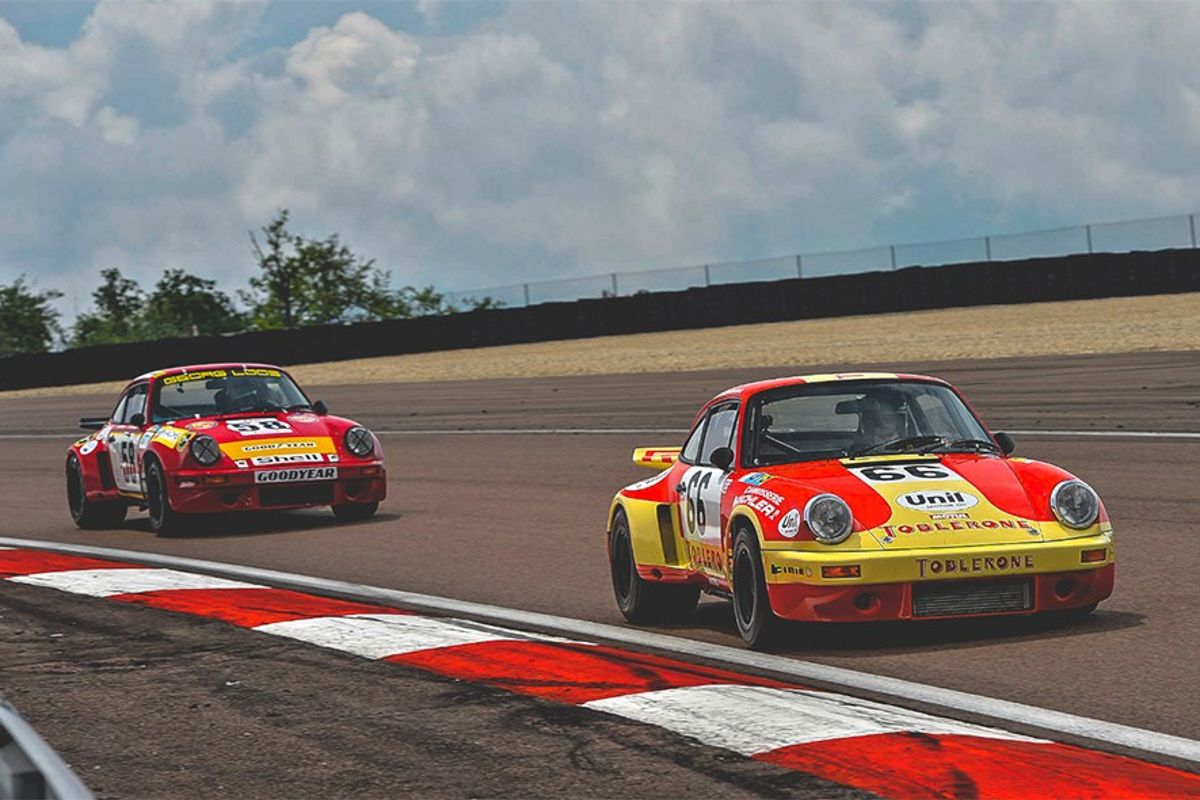 The 54th Grand Prix de l’Age d’Or held this past weekend on the Dijon-Prenois circuit fulfilled all its promise as almost 15 000 spectators came to watch the nine races on the programme for the 250 historic racing cars present.

Although changeable stormy conditions affected the rest of the country, the event was run in fine weather and went off without a hitch. The organiser Peter Auto’s six grids gave the spectators the opportunity to relive the history of motor sport in the years 1950 to 2000. The first race, the Greatest’s Trophy on Saturday afternoon, featured the most beautiful pre-66 sports and racing cars like the Ferrari 250 GT Berlinetta, the one-off GT Drogo, the Maserati T61 Birdcage, an Aston Martin DB 2/4 MkI Competition Spider by Bertone, Alfa Romeo Giulia TZs, lightweight E-Type Jaguars plus the Bizzarrini 5300 GT and several others. This was followed by the longest race of the weekend, Sixties’ Endurance, in which pre-63 sports cars and pre-66 GTs did battle on the circuit in Burgundy. The grid included names - Shelby Cobra 289, E-Type Jaguar, Chevrolet Corvette and Ford Shelby GT 350 - that resonate in the memories of enthusiasts of endurance racing which, in that era, was the blue-riband category of motor sport.

On Sunday morning it was the turn of cars in the Heritage Touring Cup to revive the halcyon years of the European Touring Car Championship between 1966 and 1984. The race was the theatre of no-holds-barred battles between BMW 3.0 CSLs, 635 CSis, Ford Escorts, Capris, Alfa Romeo 1750 GTAMs, etc. Then came the Euro F2 Classic single-seaters that wrote many thrilling pages in the history of the European Championship between 1967 and 1978. At the time F2 was considered as the last step on the ladder before F1 and a decade of drivers who were to leave their mark on the history of motor racing learned the ropes in it. They included Jacky Ickx, Jean-Pierre Beltoise, Clay Regazzoni, Ronnie Peterson, Jean-Pierre Jarier, Patrick Depailler, Jacques Laffite, Jean-Pierre Jabouille and René Arnoux. In the afternoon, the GTs and Protos in Classic Endurance Racing 1 and 2, one of the most hotly-contested and fastest series in historic racing with two grids comprising 39 and 19 cars, went at it hammer and tongs in duels worthy of those seen in endurance racing between 1966 and 1981. Gérard Larrousse, two-time winner of the Le Mans 24 Hours, former Renault Sport team manager in Formula 1 and Sport Prototypes who also set up his own team, took part in CER 1 in a 1970 Porsche 911 ST 2,5L shared with Englishman, Oliver Bryant.

Last but not least, the new 2.0L Cup grid created by Peter Auto for pre-1966 short-chassis 2-litre Porsche 911s has met with great success and 30 cars were at the start of a closely-fought race in which tiny gaps separated the drivers. The more recent GTs and prototypes, including a superb Ferrari 333 SP, which raced in the most famous endurance events in the 1990s and 2000s, make up the Global Endurance Legends field that put on three 40-minute demonstration runs during the weekend.

Aero demonstrations
Again this year the Grand Prix de l’Age d’Or not only highlighted historic cars, but also some of the greatest planes in the aviation world that came to add excitement to the skies over the circuit on Saturday afternoon. The stars of this air show were a 1949 Sea Fury in the colours of the Royal Australian Navy, a plane used during the Korean War in particular, a Morane Saulnier MS406, a French combat aircraft in WWII as well as a North American T-6 used to train Allied fighter pilots during WWII. Other important players at the Grand Prix de l’Age d’Or were the makes’ clubs of which there were even more at the event this year. Their members could enjoy laps of the track in special time slots specially reserved for them.

Meetings in the paddock

The public could also visit the many exhibitors and activities laid on for them in the paddock where they could run into Patrick Tambay who was on hand to sign a superb book retracing his F1 career at Ferrari. While waiting for the 55th Grand Prix de l’Age d’Or, the next event on Peter Auto’s calendar is the 9th staging of Le Mans Classic that will showcase 650 historic racing cars and more than 1000 drivers from 30 countries including 10 former winners and some Formula 1 drivers like ex-world champion, Jenson Button, on 6-7-8 July on the big Le Mans 24-Hours circuit.