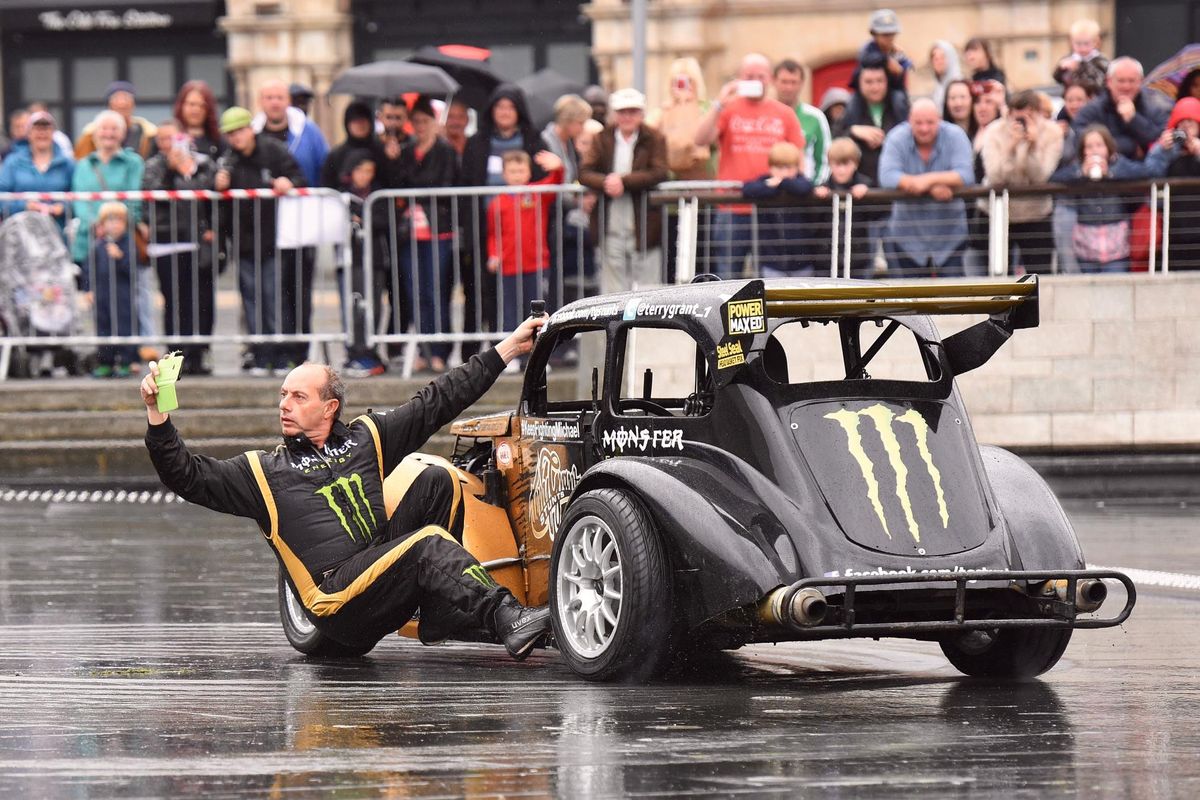 The dazzling rubber-burning displays at next month’s Silverstone Classic (20-22 July) will be the biggest and best yet with confirmation that stunt supremo Terry Grant will be lighting up his tyres alongside the ever popular, spectacular Streetcar Shootout.

With no fewer than 23 World Records to his name, swashbuckling Grant has taken his jaw-dropping stunt show right around the globe – this, though, will be the daredevil’s debut at the world’s biggest classic motor racing festival. It will be well worth the wait, too!

His astonishing roster of audacious records includes the highest loop-the-loop in a car, the fastest mile on just two-wheels, the furthest barrel roll jump, the most donuts standing on the roof of a car and the highest number of donuts in 100 seconds… to name just a few.

At the Classic, the showman extraordinaire will be wowing huge crowds from behind the wheel of both his Legend, a 1937 Ford Sedan, and his custom-built V8-supercharged stunt Mustang.

Grant will be performing at lunchtime and teatime on all three days on the old section of the famous track between what once were Abbey and Bridge corners – here he’ll be sharing the high-octane spotlight with the crowd-pleasing Streetcar Shootout.

The demo drag-strip has become a firm favourite with all ages of visitors, and this summer’s magical line-up of dramatic wheel-spinners will be the biggest and wildest ever seen at the Silverstone Classic with more than 22,000bhp tearing up the tarmac.

New for 2018 are a brace of outrageous Ford Pops hailing from the Outlaw Anglia Racing series plus an even more extreme 1936 Half Ton Truck propelled by a monster supercharged 7.7 litre V8 engine with 810 HP on tap. It all adds up to an astonishing power show… and one that, like so much of the fun-fuelled entertainment at the Silverstone Classic, is included in the ticket price.

Keeping with the event’s widely acclaimed and great value ‘access all areas’ policy, all tickets (which must be purchased in advance) include free entrance not only to watch the Streetcar Shootout and Terry Grant Stunt Shows but also both racing paddocks and pit complexes, open trackside grandstands, air displays, funfair rides, a host of family activities on the JET Village Green and live music concerts on Friday and Saturday evenings.

Adult admittance is from just £45 and considerable savings are on offer for both families and those festival-goers spending the full weekend at Silverstone. Full details can be found on the official www.silverstoneclassic.com website.