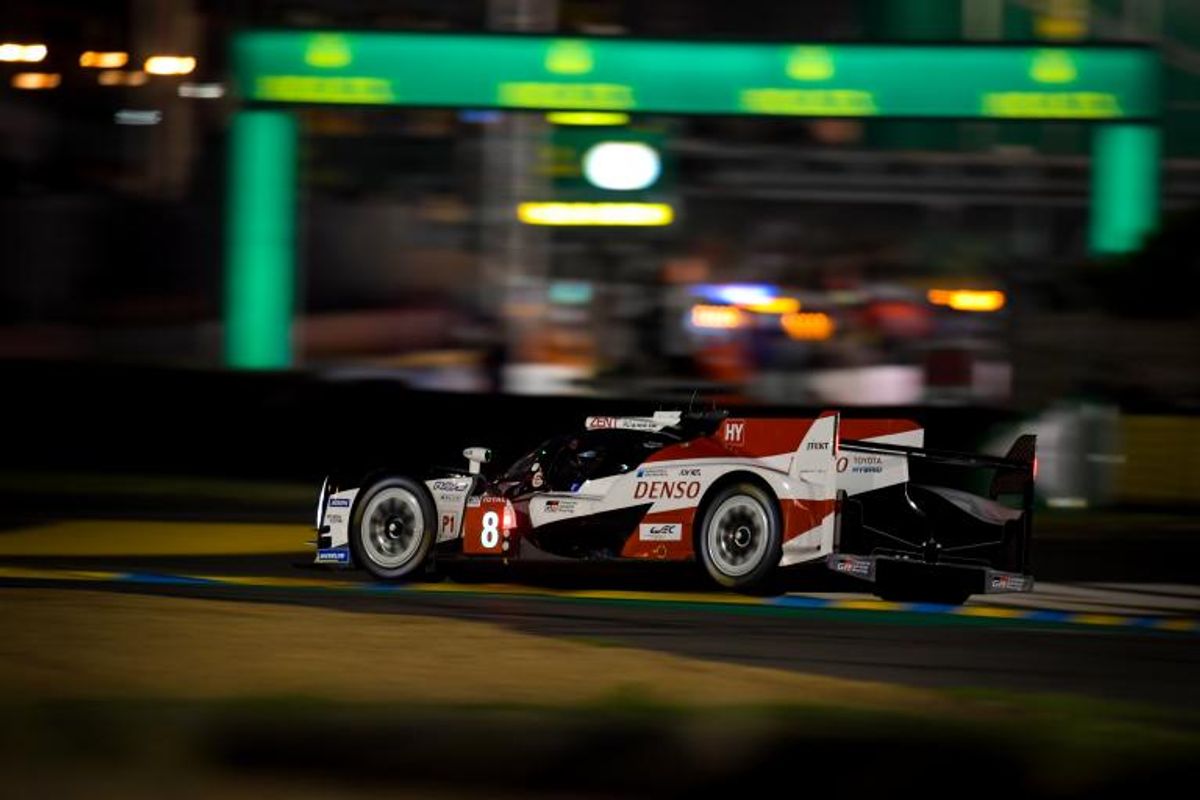 Clear favorite Toyota was in it to win tonight, placing the #7 and #8 TS050 Hybrids firmly on the front row of the 86th running of the 24 Hours of Le Mans starting grid after qualifying.

Kazuki Nakajima clocked his fastest time at the start of the third session (3:15.377), a stunning time achieved on a clear track, with ample light, around 21:40. The #8 TS050 Hybrid finished the session with a best time of 3:17.377 clocked yesterday by Kamui Kobayashi.

Toyota took full advantage of its track time on Wednesday and Thursday by doing as many laps as possible: 84 for the #7 TS050 Hybrid and 81 for the #8. Long stints were noticed for Kazuki Nakajima, Kamui Kobayashi and Fernando Alonso. The hybrid cars completed 10-11 laps at a time on several occasions as they would in-race.

Swiss team Rebellion Racing's R13s trailed the two Toyotas: the #3 by 2.875 seconds and the #1 by 4.072 seconds. The two Rebellion R13s took the lead held among the non-hybrid LMP1s by the #17 BR Engineering BR1-AER since yesterday.

The battle between two French teams, TDS Racing and IDEC Sport, continued today. Though IDEC Sport dominated LMP2 yesterday, it was TDS Racing's turn to take the reins after this final qualifying session. The #28 ORECA 07-Gibson was the fastest in the class with a time of 3:24.816 clocked by Loïc Duval. The previous 24 Hours winner is back at Le Mans after a one-year break, and doesn't seem to have lost any speed or familiarity with the circuit. However, his time was annulled for non-compliance with the mandatory technical check at the entrance to pit lane. Therefore, IDEC Sport takes the pole in the LMP2 class.

In second and third positions are French team DragonSpeed (#31 ORECA 07-Gibson) and G-Drive Racing (#26 ORECA 07-Gibson). TDS Racing is in fourth with Panis Barthez Compétition rounding out the top 5, the first team on the starting grid with a Ligier JS P217-Gibson chassis. All the LMP2s are within 15 seconds, from 3:24.842 for Paul-Loup Chatin to 3:39.518 for the #25 Ligier JS P217-Gibson fielded by Algarve Pro Racing driven by Petterson-De Jong-Kim.

Porsche managed a one-two in LMGTE Pro, and even a hat trick in LMGTE Am, even though multiple incidents repeatedly disrupted both days of sessions. Today, Kevin Estre pulled right going into the Porsche Curves with the #92 911 RSR. Early in the evening, Sven Müller (#94 Porsche 911 RSR) had an incident at Indianapolis. The 911 RSRs were on top of their game, especially at the biggest braking points of the circuit.

The #66 Ford GT is in third position after a rather eventful Thursday evening for the American marque, including incidents for Andy Priaulx and Tony Kanaan at the wheel of the #67 Ford GT. Winner in the class in 2016, Ford will occupy third, fifth, seventh and 11th positions in the LMGTE Pro class.

The top 15 cars in the class are grouped within less than 3.5 seconds. Only the Aston Martin Vantage GTEs didn't make it into the top 15.

Dempsey Proton Competition placed both its cars in the LMGTE Am top three. Even better, the #88 Porsche 911 RSR rose to the level of an LMGTE Pro with a time of 3:50.728.

Get every minute of tonight's qualifying action with our live text.

Tomorrow, the ever-popular Drivers' Parade in downtown Le Mans, but not before the Pit Walk at the circuit (with your General Enclosure pass).