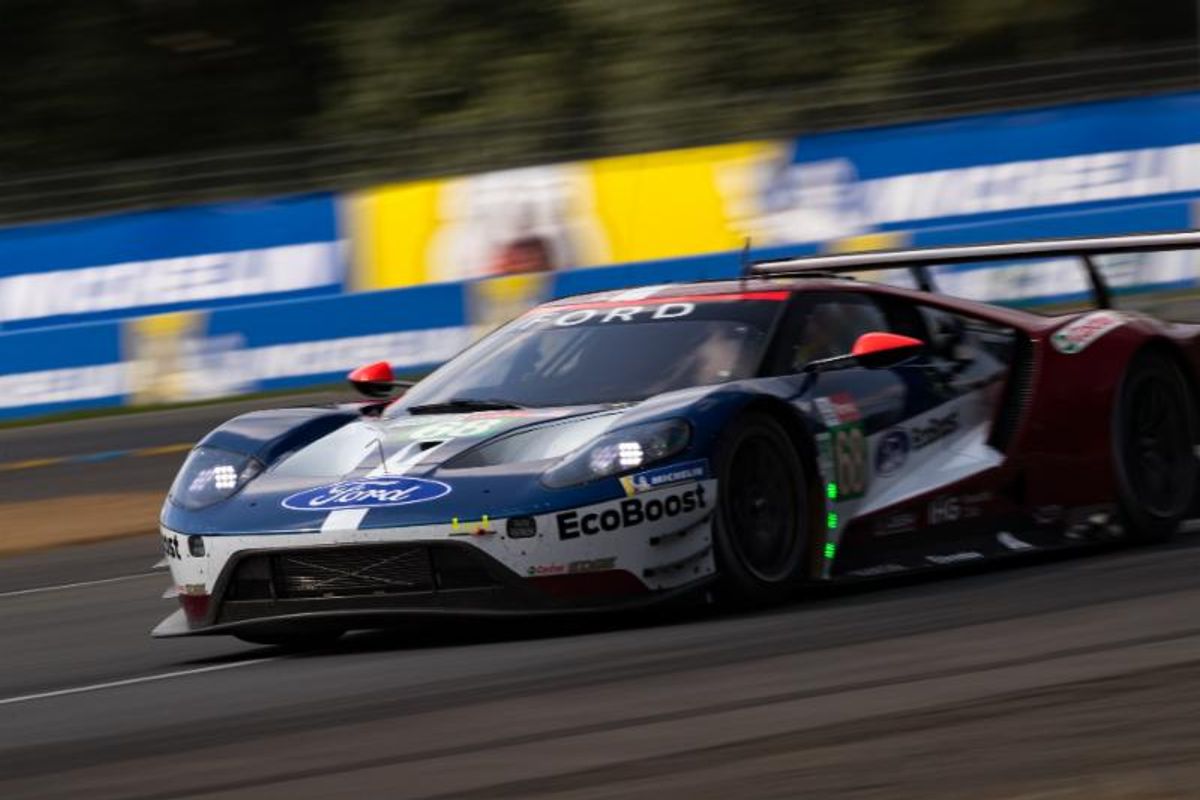 Mueller did the honors, turning a best lap of 3 minutes, 49.582 seconds around the 8.467-mile Circuit de la Sarthe on Wednesday evening, the first of three qualifying sessions for the twice-around-the clock race. The No. 68 trio head into the weekend hoping to repeat their performance from two years ago, when they won the race on the 50th anniversary of the Ford GT40’s historic Le Mans victory in 1966.

“You always wish you had more time at Le Mans,” said Hand. “You see four-hour practices and two-hour qualifying sessions and you think you have so much time, but you have the slow zones and the red flags and it cuts into your time. It’s been tricky here for sure. We rolled off at the test and were really good. And I thought we had a similar car when we rolled off for the first practice session this week, but the track rubbered up, and we’ve seemed to have too much understeer that we’ve been working on.

“We just got it better in this last qualifying session (Thursday night). We’ve been trying to work on having a great car for the race here. We’ve been successful in the past doing that. This year, with the 17 GTE Pro cars, it’s going to take everything going right.  This race is going to be won by the guys who make no mistakes.”

The race starts Saturday at 3 p.m. local time (9 a.m. ET) and will be televised live in the U.S on the Velocity network. Radio Le Mans also offers complete live coverage throughout race week, including live race coverage starting at 7 a.m. ET on RadioLeMans.com.

Top 10 Starting Spot for Segal and MacNeil in No. 84 WeatherTech Ferrari
Cooper MacNeil and Jeff Segal know what it’s like to stand on the podium at the end of 24 hours of racing at Le Mans, and their efforts to return this year will start with a top-10 qualifying result in the GTE Am class.

Segal placed the No. 84 WeatherTech Ferrari 488 GTE prepared by JMW Motorsport ninth on class grid with a best lap of 3:53.439. He’s finished on the podium in both of his previous appearances at Le Mans, including a victory in his last appearance in 2016. MacNeil took third last year in GTE Am.

“The JMW/WeatherTech Ferrari has been handling very well,” MacNeil said. “It is the same chassis that won the race last year, so the team and the car is very capable. We have been searching for speed, finding little bits every session. The Porsches are showing a lot of pace. Come race time we plan to be very competitive. The JMW Motorsport team has been very welcoming and easy to work with. We all have the same goal – to win. So far, so good, now it is time to see what race day will bring us.”

Notes:
·       Five full-time WeatherTech Championship drivers are scattered throughout the LMP2 field, and the one with the best qualifying position is current Prototype class points co-leader Filipe Albuquerque in the No. 22 United Autosports Ligier. His run of 3:26.772 set in qualifying Wednesday night held up for eighth on the class grid. He’s sharing the car with a pair of 2018 Tequila Patrón North American Endurance Cup competitors, Phil Hanson and Paul Di Resta.

·       Another IMSA regular whose car has a solid starting position is two-time defending WeatherTech Championship GT Daytona (GTD) champion Christina Nielsen. Her teammate, Fabio Babini, placed the No. 80 Ebimotors Porsche 911 RSR seventh in the GTE Am class with a lap of 3:53.402.

·       The lone full-time IMSA driver in the LMP1 field, Renger van der Zande, will see his team start from sixth on the grid in his Le Mans debut. He’s sharing the No. 10 Dragonspeed BR Engineering BR01-Gibson with Ben Hanley and Henrik Hedman. The car’s best qualifying lap was a 3:21.110.

·       It’s going to be an extremely busy 36 hours or so for the Cetillar Villorba Corse team that includes another WeatherTech Championship Prototype points co-leader in Felipe Nasr. The team’s No. 47 Dallara LMP2 machine was damaged in a crash by Nasr’s co-driver Giorgio Sernagiotto during the first of two qualifying sessions on Thursday evening due to a technical issue. The incident brought an early end to the session, but Sernagiotto avoided injury. The team is working to repair the car prior to Saturday’s 3 pm local time race start.