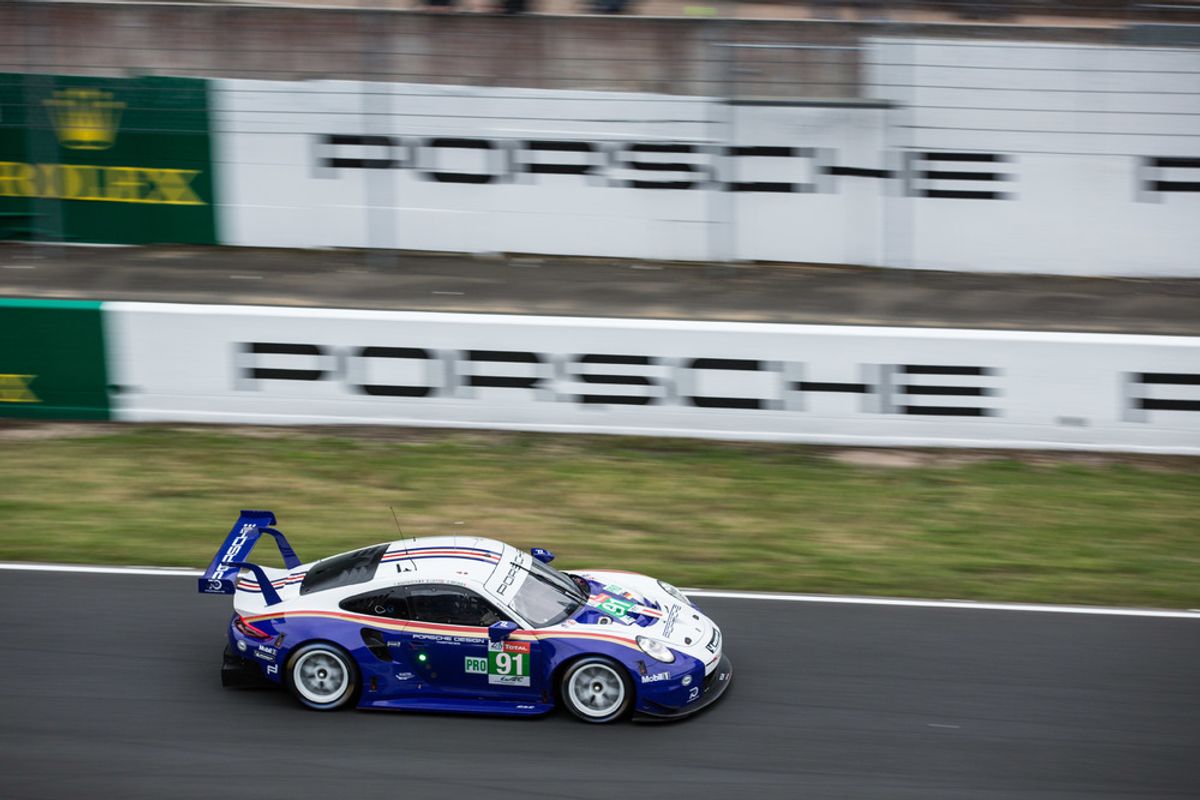 Two Porsche 911 RSR racers take up the 86th edition of the Le Mans long-distance classic from the first grid row. At the wheel of the #91 vehicle, Gianmaria Bruni had already set the quickest time during the first qualifying session on Wednesday, which no team could beat in the final qualifying day. Bruni lapped the 13.626-kilometre circuit in 3:47.504 minutes. Never before has a GT vehicle turned a faster lap at Le Mans. This puts the Italian and his teammates Richard Lietz (Austria) and Frédéric Makowiecki (France) on pole position for the 24-hour race. The #92 Porsche 911 RSR driven by Michael Christensen, who also posted his fastest lap in the first qualifying, takes up the race from the second grid spot. The Dane shares the cockpit with Frenchman Kévin Estre and Laurens Vanthoor from Belgium.

Patrick Pilet was able to improve in the 510-hp nine-eleven (#93) in the final qualifying, setting the sixth fastest time with his teammates Nick Tandy (Great Britain) and Earl Bamber (New Zealand). Bad luck struck Sven Müller in the fourth Porsche 911 RSR (#94). The youngster from Germany, who also tackles the GTE-Pro class, slid from the track in the Indianapolis 1 turn. The vehicle could no longer continue in the qualifying session, however it will be ready to take up the race from eighth on the grid on Saturday.

In the GTE-Am class, three Porsche 911 RSR conquered the first three grid positions. Porsche Young Professional Matteo Cairoli (Italy), Khaled Al Qubaisi (United Arab Emirates) and Giorgio Roda (Italy) secured pole position with their #88 911 fielded by Dempsey-Proton Racing. Directly behind them, the Porsche 911 RSR (#86) run by the Gulf Racing team and the #77 vehicle of Dempsey-Proton Racing head off into the long-distance classic at 3pm on Saturday from positions two and three respectively.

Dr Frank-Steffen Walliser, Vice President Motorsports and GT Cars: “All our vehicles are performing well and have been very reliable. The qualifying results are great with the fastest time in the GTE-Pro class and positions one, two and three in the GTE-Am class. As race preparation this is good because it has a calming effect and shows where we stand. Gianmaria Bruni’s fastest lap was simply magic. Everything came together perfectly: no mistake, little traffic and slipstream. You see from the times how close the competition is and how tough things are out there. Unfortunately this also led to some trips off the track. The #94 was badly damaged, but the car will be back on its wheels in time for the race. 24 hours is a long time, so it’s certainly important to avoid making mistakes.”

Pascal Zurlinden, Director GT Factory Motorsport: “The track was a little slower during the final qualifying, however two of our cars managed to improve their times. We’re facing very strong opposition, but we have four fast cars with experienced teams and drivers. Our goal is to perform consistently and win the race.”

Gianmaria Bruni (Porsche 911 RSR #91): “Pole position at Le Mans doesn’t really mean a lot for the race, but of course it makes me very happy. It’s especially great that the lap time sets a new GTE record at Le Mans – on the 70th anniversary of the Porsche brand. We can all be very proud, from the mechanics at the track to the engineers at Weissach. I’m pleased to be a member of this fantastic team and I’ll be taking up the race on Saturday as the start driver.”

Richard Lietz (Porsche 911 RSR #91): “Basically we completed our mandatory laps in the last session. Every driver has to turn five laps during the night to get used to the darkness. An accident prevented us from doing this in the first qualifying session."

Frédéric Makowiecki (Porsche 911 RSR #91): “We noticed during the qualifying that the times weren’t getting faster. From that point on, we focussed on finding the best setup and balance for the race.”

Kévin Estre (Porsche 911 RSR #92): “Second on the grid is good, because we kept out of all the fights for positions and didn’t have to battle our way through the field. The heavy traffic in the final qualifying session prevented us from beating our best time, so we concentrated on the race.”

Michael Christensen (Porsche 911 RSR #92): “The field got really twitchy in the last qualifying session and there were a lot of interruptions so I didn’t get the chance for a clear lap. I’m feeling optimistic, because we’re heading into the race with a well setup vehicle.”

Patrick Pilet (Porsche 911 RSR #93): “As far as going for top times is concerned, the last qualification wasn’t perfect. On the other hand, we made great progress with the race setup – we know what we need to do on the car and we’ll keep improving during the race.”

Earl Bamber (Porsche 911 RSR #93): “The final day of qualifying was okay for us. Patrick turned a good lap, but the track wasn’t as fast as yesterday. With the race setup, we moved in the right direction step by step. We’ll be competitive in the race.”

Nick Tandy (Porsche 911 RSR #93): “We didn’t get much track time during the final qualification, but we ticked everything off our list. For us drivers, it would have been good to have had more time to get used to the dark, but in any case we’re well prepared for the race.”

Sven Müller (Porsche 911 RSR #94): “My qualifying was shorter than expected unfortunately. In my first flying lap I suddenly had no grip at all in Indianapolis 1 and lost the car. Luckily the vehicle can be repaired, but something like this can’t happen in the race.”

Jörg Bergmeister (Porsche 911 RSR #56): “Unfortunately, after being hampered by heavy traffic in the first qualifying, we deliberately focussed on preparing for the race. We drove long runs on soft tyres. The car felt really good and I’m looking forward to the race. For us as a new team, it’s a huge challenge to take on the 24 Hours of Le Mans as a second task.”

Matt Campbell (Porsche 911 RSR #77): “We’d hoped to be able to improve on our times from the previous day. The conditions were simply not good enough. Our setup is not too aggressive, but we still should have been able to improve.”

Christina Nielsen (Porsche 911 RSR #80): “After not getting a lot of track time at the test day, the qualifying sessions were very important for us. In the final session we made progress. Now we’ve found a solid setup for such a long race.”

Matteo Cairoli (Porsche 911 RSR #88): “We stopped working on the race setup during the final qualifying and instead attempted to defend our position. We’re now ready with our setup and our strategy for the race. I’ll drive the first stint followed by Khaled and then Giorgio.”

Ben Barker (Porsche 911 RSR #86): “We were strong in our last qualifying and managed to make up two positions. The balance of the car is good, which bodes well for the race. We’ve gained a lot of important insights during the qualifying sessions and we’re heading into the race on Saturday feeling confident.”

Patrick Long (Porsche 911 RSR #99): “Wednesday was a difficult day for us, but now things are improving. We decided not to attack with a couple of fast laps. Instead we used the time to help get my teammates more familiar with the car. The baseline setup now fits, everyone is focussed and we look forward to contesting this unique race. This is my 15th time in a row here.”