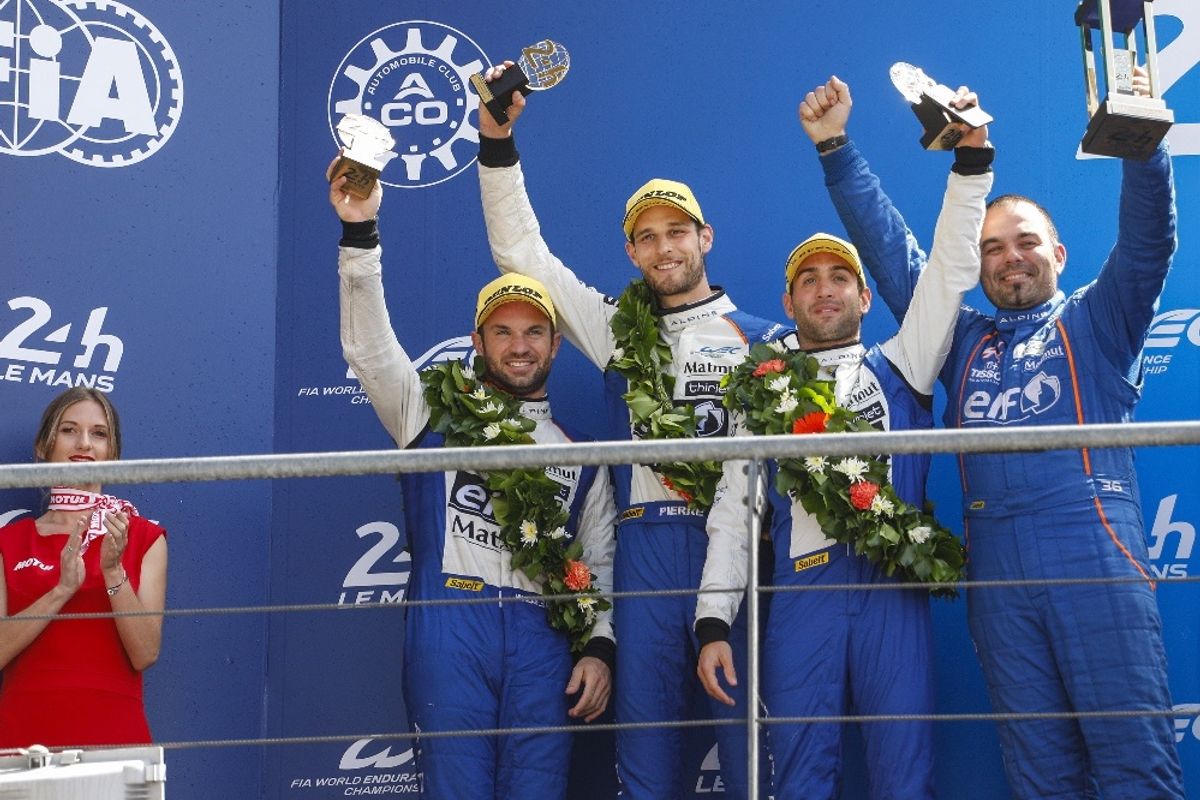 Like in 2014, 2016 and 2017, Signatech Alpine Matmut finishes on the 24 Hours of Le Mans LMP2 podium.
Perseverant from start to finish, Nicolas Lapierre, André Negrão and Pierre Thiriet finish second in 2018.
The crew scored maximum points and are now atop the FIA WEC World Championship with a substantial lead.

As is tradition, the race began Saturday at 15:00, under cloud-filled skies. The chaos at the first corner allowed Nicolas Lapierre to gain one place from his position on the grid.

Fifth at the end of lap one, the Signatech Alpine Matmut driver then avoided the hazards from the falling rain at various points around the circuit. At the conclusion of the first stint, the team strategies became known with some –including Alpine– able to put in one more lap than the others on a full tank of petrol. This fuel efficiency allowed Nicolas to move up to third place.

After a triple-stint, Nico handed over to André Negrão. The Brazilian continued the work his team mate began and was soon in second position. He then lost time during a first safety car period, but held position just until ceding his place to Pierre Thiriet.

As night time neared, the racing incidents multiplied resulting in just as many “slow zones” at a limited speed, which made it difficult to maintain tyre temperatures and Pierre got caught out just prior to the end of his triple-stint, he spun and lost second place while trying to return to the action.

Then Nicolas Lapierre got back in the Alpine and quickly returned to the chase. Third after six hours, the n°36 car was soon back in second place.

As always, night time at Le Mans was full of twists and turns. The Signatech Alpine Matmut team had its share of misadventures, whether it was an extremely unfavourable safety car period or the replacing of the nose section due to debris from another car that went off circuit.

Happily, the morning was calmer and the Lapierre / Negrão / Thiriet trio was rewarded for its perseverance when it retook second place just before 11:30.

From then on, the team asked the drivers to ensure the result and Nicolas Lapierre put in the final stints with the only goal being to make it to the finish safely.

After the 2016 victory and third place finishes in 2014 and 2017, Signatech Alpine Matmut took second place this year. This result celebrates the 40th anniversary of the victory for the A442B of Pironi and Jaussaud in 1978, but it is equally important in terms of the FIA World Endurance Championship!

The winning crew in the 24 Hours of Le Mans is not entered in the WEC. Nicolas, André and Pierre score the points for the victory, with a coefficient of 1.5 for this 24-hour race. They also take the lead in the general classification with a comfortable points lead from the second place crew.

The next round of the FIA Word Endurance Championship will be held at Silverstone August 19.