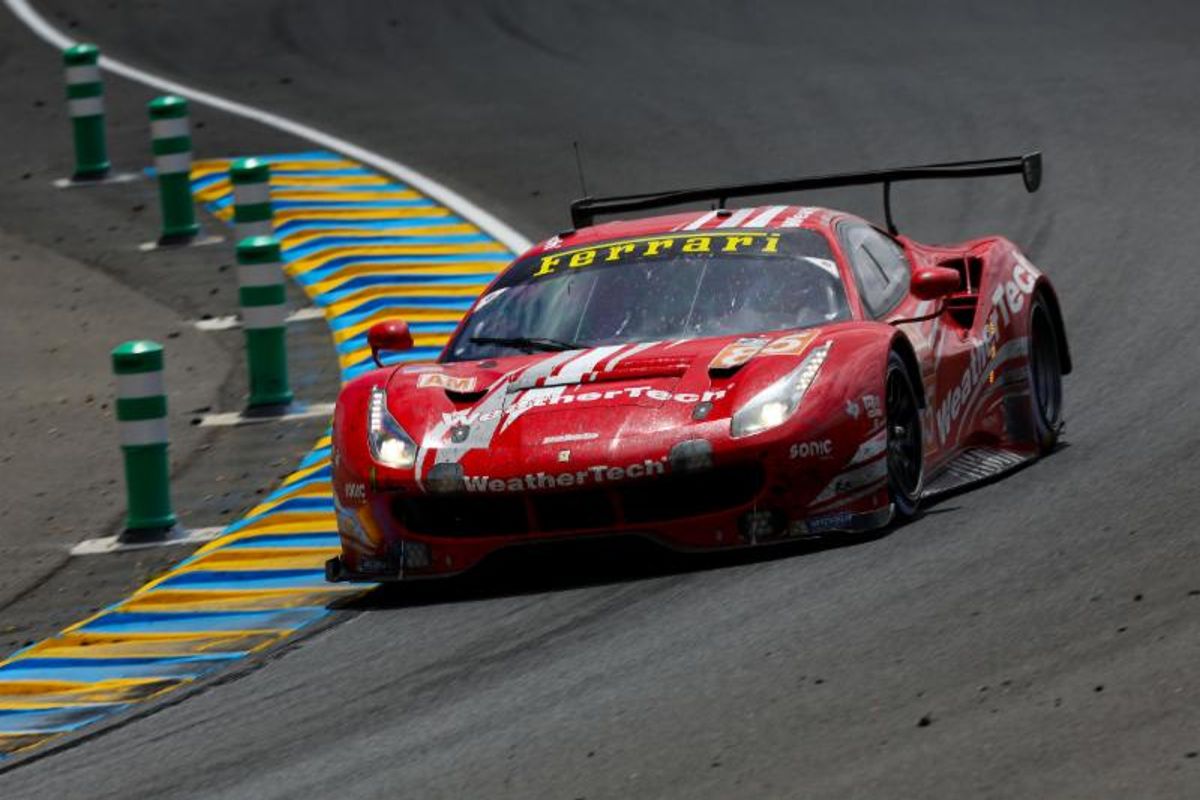 The Risi Competizione team with Keating Motorsports added another podium result to its Le Mans history in the 86th running of the 24 Hours of Le Mans, June 16-17. The popular American privateer Ferrari team finished third in the GTE-Am class, collecting its seventh podium, including three victories, at the Circuit de la Sarthe's legendary endurance classic race over the years.

This year was Risi Competizione's ninth year to compete at Le Mans, with a total of 13 previous entries. All entries have been Ferrari's and including victories in their inaugural season in 1998 with the Ferrari 333SP, in 2008 and 2009 in the F430 GTC/GT2. In 2007 and 2009 their Krohn Racing customer finished second and third, respectively, in the Ferrari 430 GT/GT2. In 2016, Risi Competizione returned to the podium (in second place) with a Ferrari 488 GTE-Pro in a fierce battle with the Ford GTs.

The Texas-based Le Mans effort showed that even a small, private team can achieve success with the right combination of hard work, good driving, Le Mans knowledge and a bit of luck.

At the start we had a small setback when Bleekemolen was pushing on his second stint and lost the rear and spun. The car wasn't damaged, but the tires needed to be changed, necessitating an unscheduled pit stop. Keating got a little aggressive in his last stint and spent a short time in a gravel trap, that luckily only lost a small amount of time. In the end, Bleekemolen was still able to bring the car to the finish.

As with any endurance race, having the least amount of problems or drama is what brings good results. The Ferrari team from Texas had a near perfect day and were rewarded with a third-place finish and spray of the champagne for their solid, strong effort

The GTE-Am class winner was the No. 77 Dempsey-Proton Racing Porsche 911 RSR, followed by the No. 54 Spirit of Race Ferrari F488 GTE, then the No. 85 Keating/Risi Competizione Ferrari 488 GTE.

Rick Mayer, Keating Motorsports/Risi Competizione Race Engineer:
"I thought all the drivers did a really good job in the race. We only had a couple of small on track issues but that ended up being somewhat fundamental in the outcome because a lot of guys ran clean, which is not always common here. We had pace to run with the Ferraris, but the Porsche had a bit more pace than we did, but that was just a BoP (Balance of Performance) thing. All-in-all the car ran flawlessly, the crew made no errors in the pits and had excellent prep and that's what it takes to do well at Le Mans. We spent no time in the garage. I think you have to be happy with the podium, even though we'd like to win it, but I think it was a good result. Obviously, we've had good results here; we've won several times in class, and that's what we were hoping for, and maybe we'll get it next time."

Ben Keating, Team Principal and driver, No. 85 Ferrari 488 GTE-Am:
"I am excited to have a podium here, excited to be in position to have the podium here. I still have a hard time getting over the mistake that cost us second, and I know Jeroen has been giving himself a hard time for 22 hours for the mistake for a chance to win it, but a podium at Le Mans is special. I'm grateful for that and I'm grateful to be here and have a really incredible run with the team, with the car. We never had a mistake in the pits. We never had a mistake as far as strategy; never had a penalty or gun gone wrong or a mistake by the team anywhere. It was all done flawlessly and I'm just grateful that they put us in this position."

Jeroen Bleekemolen, driver, No. 85 Ferrari 488 GTE-Am:
"To be on the podium at Le Mans is always special. It's the biggest endurance race in the world so to get a trophy is a very big achievement! I think at some point during the week we all hoped for a little bit more than third place, but still you have to be happy with what we got today. The whole team did a good job. We had a good race and, also, we had a really good time. It is one of the coolest races in the world, for me the coolest!"

Luca Stolz, driver, No. 85 Ferrari 488 GTE-Am:
"I think it was definitely nice to finish third at Le Mans and it's an awesome feeling. We were fighting for the win, basically all the race, and we had some little mistakes that basically cost us the race, but I think compared to the Porsche we struggled a bit on pace. The team did really a problem free race with no issues at all. Every pit stop went well, every tire change, every fuel top off. So, congratulations to the team. We had no penalty and basically a good race. Not a bad finish. It's cool to go to Le Mans for the first time and go straight to the podium. We had the chance to finish P2 or even P1 which gives me a little bad feeling in the end, but still I'm happy to finish on the podium."

Dave "Beaky" Sims, Keating Motorsports/Risi Competizione Team Manager:
"It's great to be on the podium at Le Mans. It's my third time to be here on the podium with Risi Competizione and sixth year for the team since it started in 1998. Today the race preparation of the car was exceptional. It didn't miss a beat. The pit stops couldn't be faulted. When you do that and give the drivers a car like that it makes everything work - pit stops, driving, the car has hardly a scratch on it after 24 hours, which is very unusual. The Risi quality of preparation, the strategy and pit stops were all perfect and it showed. We were really pleased with it and so were the drivers."