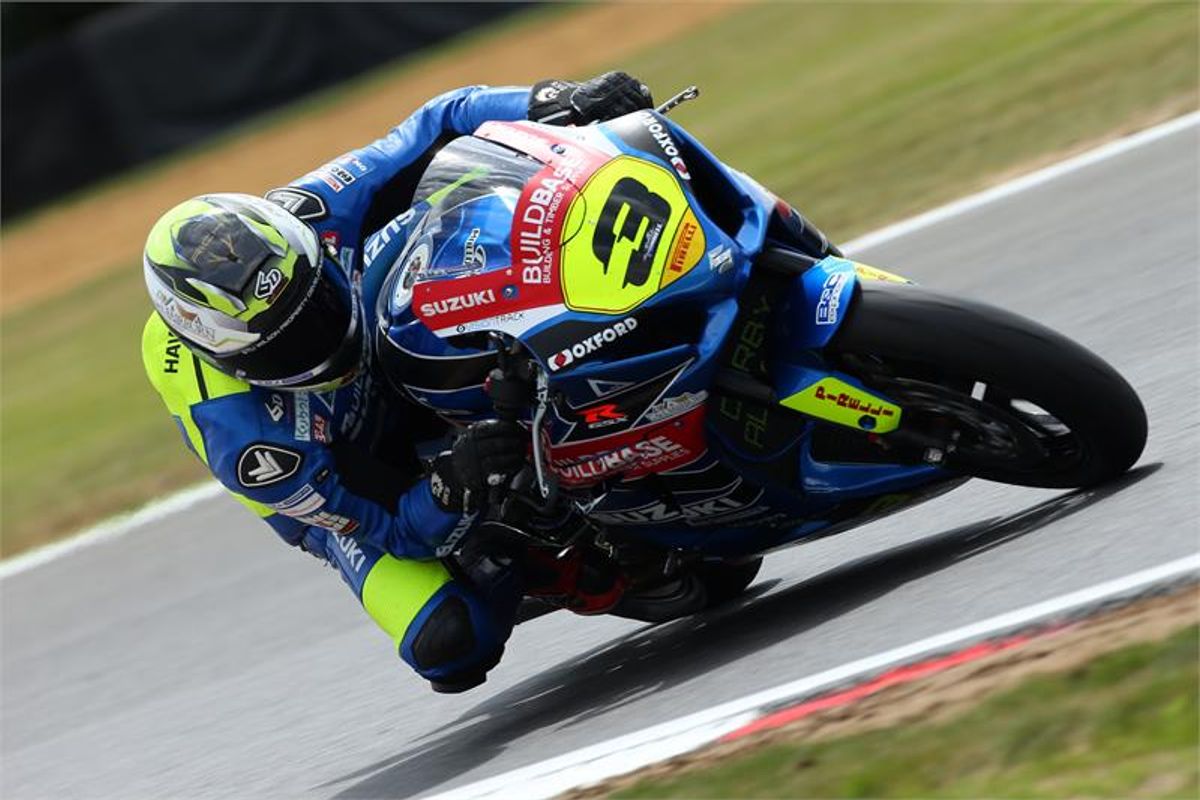 Buildbase Suzuki’s Billy McConnell extended his series lead in the Pirelli National Superstock 1000 Championship after finishing second in today’s race on his GSX-R1000. In the Bennetts British Superbike Championship Richard Cooper took a 10th and a seventh, as Bradley Ray crashed out of both races.

McConnell was quickest in qualifying, and started the race from pole position. Dropping to third in the early stages, he recovered to take the lead and held it for much of the race. Holding second on the last lap the Australian wasn’t quite able to make a pass for the win, but came away with an extended championship advantage.

There was another GSX-R1000 on pole for today’s opening Superbike race, with Bradley Ray starting from the head of the grid. Setting the pace, the youngster made a mistake and crashed from the lead. Unfortunately, he also crashed from a podium battle in race two.

Richard Cooper took two solid top-10 finishes on the second Buildbase Suzuki Superbike. Cooper claimed 10th place in race one, before improving to seventh in race two after some adjustments to the setup of his GSX-R1000 superbike and a change in tyre choice.

“Obviously I’m disappointed not to get the win today. We had good pace and led for a fair bit of it. When Joe [Collier] came past me, I saw on the big screen we had a bit of a gap over the guys behind, so I didn’t take any risks, I thought about championship points, and just thought I’d line up a last lap pass if we could. The places I could make up the most time was in the last sector, and I tried to run it round the outside of Coram but I wasn’t quite close enough. But we extended the championship lead and beat some of our other rivals, and the bike was working well. We’ll try and get out again before Knockhill to get some more bike time and keep ourselves sharp, then it’s Knockhill and hopefully we can get back onto the top step.”

“I’m happy enough with our performance in the end. In race I struggled a bit; we came away with 10th but to be honest we probably took the safer option with the harder rear tyre and I couldn’t really make it work. In race two we made some changes, shortened the wheelbase and ran the harder tyre, and the pace came to me and I knew the tyre could do to the distance. It meant I was able to have a race rather than just ride around, and even though we finished seventh we were in the battle for fourth. We need to improve qualifying our performance at Knockhill. But we’ll be out again before then, too, so we’ll also be trying some new things with the bike. I’m taking the positives from this weekend and hopefully we can improve again next time out."

“I’m gutted to be honest. We had a good pace all weekend, set Pole in qualifying, and felt we could win or be on the podium in both races today. Sadly I made two mistakes and unfortunately they’ve cost us two podiums in reality, maybe a win or two. Sorry to the team and sorry to Glenn [Irwin] for collecting him. The positives are we’ve got the pace – we showed that by leading the race today – and the bike was working well. We’ll regroup and try and put it right at Knockhill.”