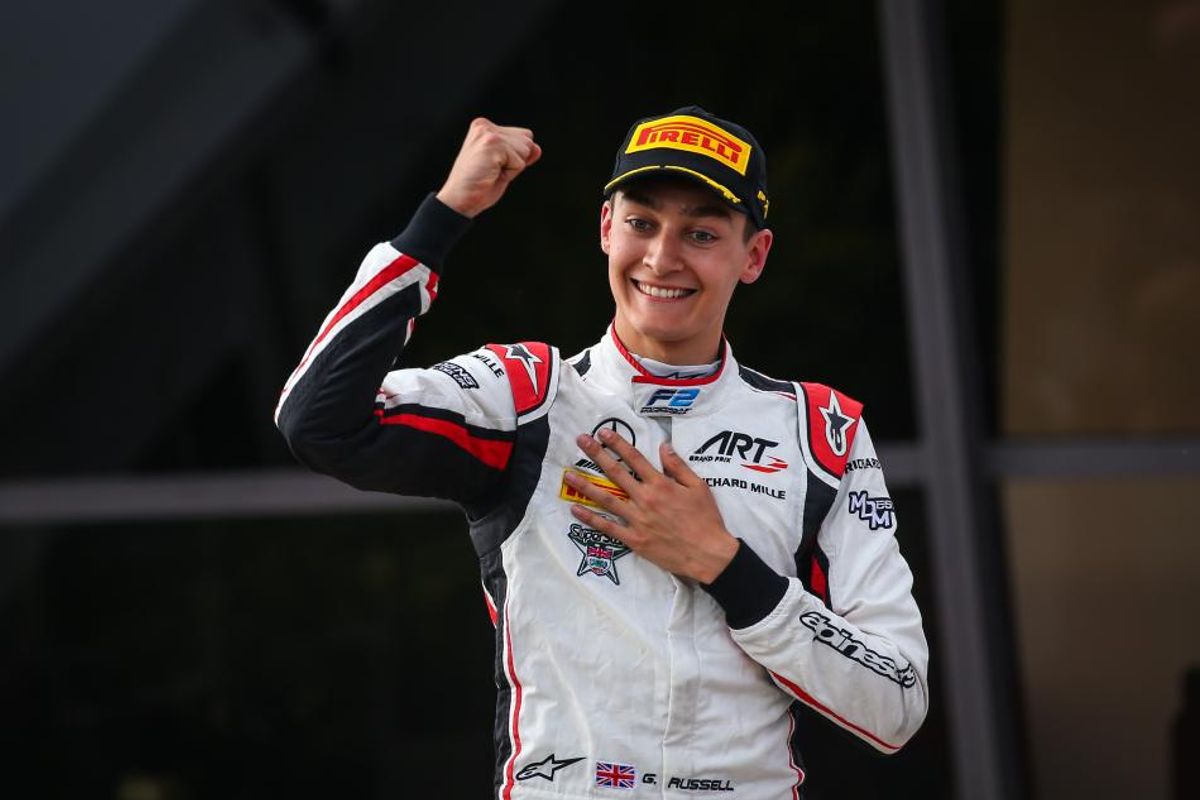 George Russell produced a stunning drive in the FIA Formula 2 Championship Feature Race at Le Castellet, France, overcoming tricky conditions and a late assault from Sergio Sette Camara to clinch his third victory of the season. Carlin’s Sette Camara pushed Russell all the way to the finish, while MP Motorsport’s Roberto Merhi secured his second podium of the year with a third place finish from P15 on the grid.

With the threat of rain looming, the formation lap got underway with Antonio Fuoco requiring a quick jump-start from a mechanic as the lights turned green, earning himself an immediate stop-go penalty in the process. At the lights, Russell produced an immaculate start to maintain the lead into turn 1, as Sette Camara surged into second ahead of Alexander Albon while both Lando Norris and Artem Markelov stalled on the grid.

Immediately, rain started to appear, catching a number of drivers out on the opening lap as the track surface quickly became slippery – Nicholas Latifi having a momentary off before Luca Ghiotto suffered from a spin – luckily pirouetting to face the right way. After just three laps, Russell made his advantage at the front clear, opening a 3 second gap to Sette Camara, with Albon remaining in pursuit of the pair.

With conditions getting more difficult with each passing lap, a number of drivers endured moments off the circuit. Jack Aitken passed Louis Déletraz for fourth place at the start of lap four, but later went off at Signes having lost grip and allowing the Swiss driver to challenge once more – with Nyck de Vries, Sean Gelael and Roberto Merhi joining the same battle. With the cars ahead of him sustaining their own forays off the circuit, Merhi managed to tentatively make his way through the pack– Gelael’s spin bringing out the first virtual safety car.

At the front, Russell elected to remain on his supersoft tyres, while Norris, Aitken and Roy Nissany made gambles on the wet-weather tyres – Norris and Aitken returning for slicks one lap later as the rain began to clear. With the front two yet to stop, Albon pitted for the medium compound, returning to the circuit sixth before a second VSC period – brought out for the stranded Ralph Boschung, who stopped on the start-finish straight.

At the end of the VSC, Albon put his fresh tyres to work and set about winding Russell and Sette Camara in. Passing Déletraz, the DAMS driver sustained a mechanical issue which ended his progress and left him to retreat to the pits. This left Sette Camara free to challenge Russell, the former pitting at the end of lap 17 to attempt an undercut on the ART driver’s advantage. Covering him off, Russell collected fresh mediums on the following lap, retaining the lead with a 3.4s advantage – with the yet-to-pit de Vries in third.

With the stops completed, the pendulum was arguably in Sette Camara’s favour, and the Brazilian clocked a new fastest lap to reel Russell in. The British driver hit back, opening up the lead once more, and the two were left unchallenged at the front after de Vries made his pitstop on lap 24 – having opted for an alternate strategy by starting on the medium tyres. This shuffled Merhi up to third, with de Vries dropping behind Fuoco – who had battled to fifth despite his earlier penalty.

As the race entered its final five laps, Sette Camara began to turn the screw on Russell, taking chunks out of the race leader’s gap before locking up at the Mistral chicane and carrying on. Having been investigated by the stewards, Sette Camara was deemed not to have gained an advantage, leaving him to bear down on Russell once more in the dying stages.

On the final lap, Russell managed to avert being within Sette Camara’s DRS range, but struggled to keep him behind; on the final corner, Sette Camara made a last-ditch lunge down the inside, but Russell held on to cross the line to claim his third F2 victory, Sette Camara having to be content with second on his return from injury. Merhi, having kept his nose clean in the early stages, clinched third – albeit 32 seconds further behind – while Ghiotto shook off his early spin to finish in fourth.

Fuoco took fifth place from de Vries – who claimed the fastest lap - with Louis Deletraz leaving the Dutchman in a Charouz Racing System sandwich, while Nicholas Latifi claimed eighth place at the death from Tadasuke Makino; the RUSSIAN TIME driver made a move on Latifi on the final lap at the Mistral chicane, but the Canadian refused to give up and streaked past Makino on the outside of turn 10 to clinch reverse-grid pole for tomorrow’s Sprint race, as Nirei Fukuzumi captured the final point.

With further chances of rain in Sunday’s race, and with many of the championship’s front-runners occupying places further down the grid, there’s certainly everything to play for on Sunday morning.