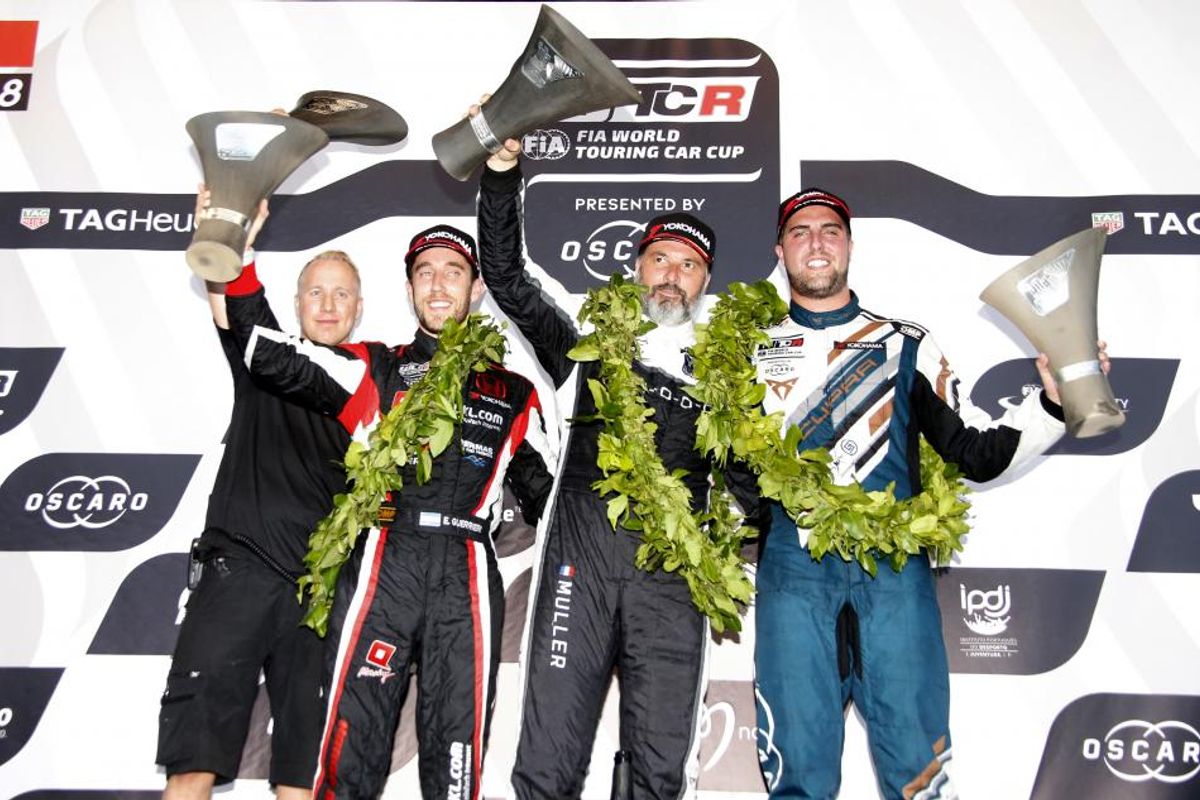 Yvan Muller emerged with an unlikely victory from Race 1 at WTCR Race of Portugal following a multi-car accident that caused a stoppage of more than two hours in the WTCR – FIA World Touring Car Cup presented by OSCARO at Vila Real.

But the main talking point was the accident on the first lap that prevented seven cars from taking the restart and a number requiring significant repair.

DHL Pole Position sitter Rob Huff and Mehdi Bennani led the bunched pack up the hill at the start, but made contact which pitched both Sébastien Loeb Racing Volkswagen Golf GTI TCRs into a dramatic accident. Huff and Bennani were both taken to hospital for precautionary checks. Their heavy impacts with the barriers caused a chain reaction through the closely following pack and put a number of front-running cars out of the race.

Among them was Thed Björk’s YMR Hyundai, which briefly caught fire. The Swede clambered out through the window of his car, while Yann Ehrlacher scrabbled out of the back of his ALL-INKL.COM Münnich Motorsport Honda.

The accident caused severe damage not only to a large number of cars, but also to the barriers. But race organisers and circuit staff put in remarkable work to repair the barriers and allow racing to resume.

That left Muller with the virtual pole for the safety car restart. The French legend had got through the crash relatively unscathed only thanks to a disastrous start that left him plummeting down the order from his original P6 grid slot. That meant he missed the worst of the accident at the front of the pack.

Muller made a clean getaway once the safety car peeled off, negotiated the mandatory 'joker' lap and was never headed to claim not only the victory, but also the WTCR points lead thanks to the misfortune of his title rivals.

“It was a long race,” he said, referring to the lengthy delay between the accident and the restart. “Okay, it’s a victory and I’ll take the points, but it’s not really a victory. Rob was the fastest driver today.”

There was further drama on the last lap when Gabriele Tarquini, running third in his BRC Racing Team Hyundai, slowed suddenly on the approach to the finish line. That allowed Pepe Oriola to claim the final podium position as the top Vila Real rookie, while Tarquini clung on to finish fourth.

Jean-Karl Vernay, who had started from the pitlane and thus also avoided the damage, finished fifth in his Audi Sport Leopard Lukoil Team Audi RS 3 LMS. He could have been fourth, only for Oriola to jump him with a strong move as Vernay completed his joker.

Benjamin Lessennes was seventh in his Boutsen Ginion Racing Honda, ahead of the Audis of Nathanaël Berthon, Gordon Shedden and Frédéric Vervisch.

For the teams whose cars suffered severe damage, the race will now be on to complete repairs overnight before qualifying on Sunday morning.

WTCR Race of Portugal resumes with Second Qualifying taking place at 09h00 local time. Race 2 is scheduled to start at 15h45, and Race 3 at 17h10.