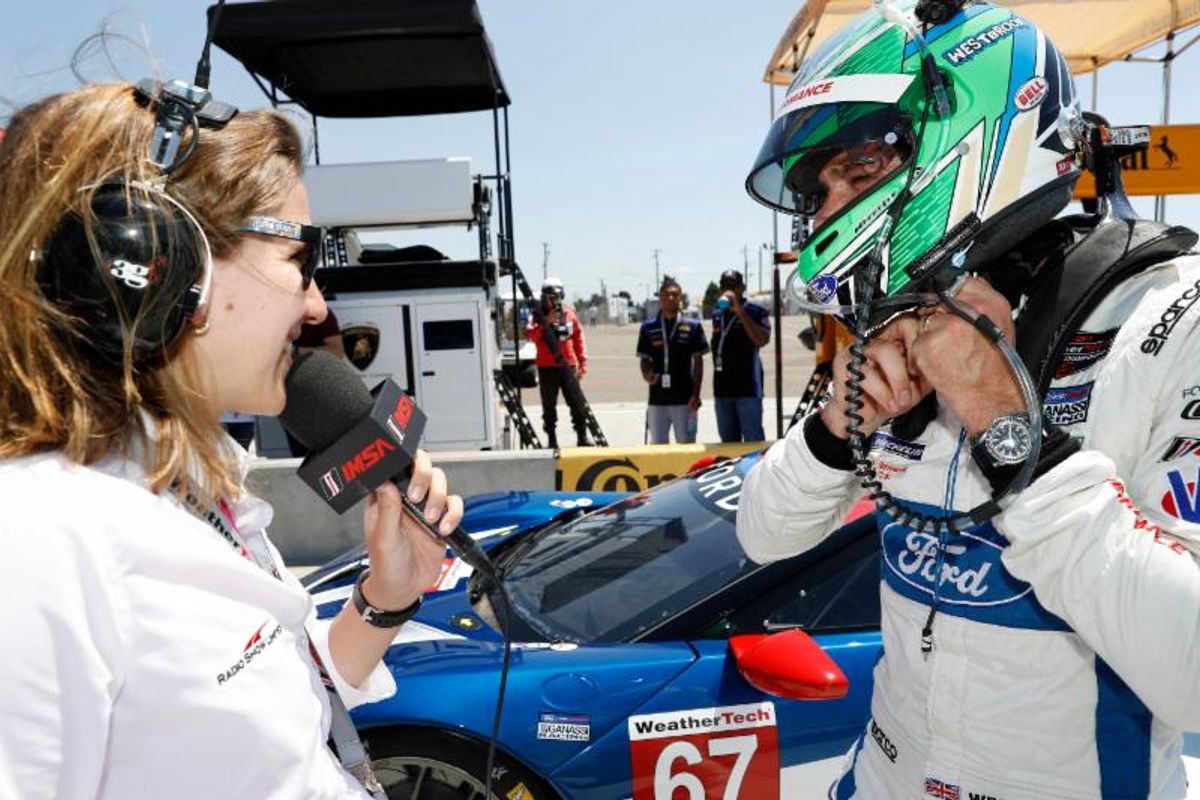 As the IMSA WeatherTech SportsCar Championship celebrates the Fourth of July this weekend at Watkins Glen International, it’ll be an all-American first two rows leading the GT Le Mans (GTLM) class to the green flag Sunday in the Sahlen’s Six Hours of The Glen.

A pair of Ford GTs will lead a pair of Chevrolet Corvette C7.Rs ahead of the remaining GTLM field to start the six-hour race with Richard Westbrook on pole with a lap of one minute, 41.948 seconds (120.061 mph) in the No. 67 Ford Chip Ganassi Racing Ford GT. He’ll be joined by teammate and 2017 Sahlen’s Six Hours of The Glen pole winner Joey Hand in the No. 66 Ford Chip Ganassi Racing entry on the front row.

“I knew Joey was going to make me work hard for it,” said Westbrook. “And he's beaten me too many times in qualifying in the last two years, so I finally get back on him. We didn't have a pole the first year, but the last year in the Ford we had plenty. Just happy to keep it going.”

Given his and Ford’s recent success at the track, it’s no surprise that Westbrook considers Watkins Glen one of his favorite circuits. Westbrook won the race in the Prototype class and overall in 2014 and 2015, and took the GTLM win in the 2016 Sahlen’s Six Hours of The Glen.

“This whole track is cool,” Westbrook added. “It's just an amazing part of motorsports history and the fact that it just keeps going and keeps delivering. The new surface is awesome. We love coming here and hope to keep coming back here.”

The Sahlen’s Six Hours of The Glen is the midway point of the WeatherTech Championship season and the third round of the four-race Tequila Patrón North American Endurance Cup. The Patrón Endurance Cup rewards top performers in the four WeatherTech Championship endurance races: the Rolex 24 At Daytona, the Mobil 1 Twelve Hours of Sebring, the Sahlen’s Six Hours of The Glen and the 10-hour Motul Petit Le Mans at Road Atlanta.

The race will be televised live on FS1 beginning at 9:30 a.m. ET on Sunday. Live IMSA Radio coverage also is available on IMSA.com, RadioLeMans.com and SiriusXM Radio.

Driving the No. 15 3GT Racing Lexus RC F GT3, Hawksworth hung around the top of the time charts throughout the 15-minute qualifying session, ultimately ending up first with a time of one minute, 44.499 seconds (117.130 mph).

“It was an interesting (session),” said Hawksworth, who co-drives with David Heinemeier Hansson. “Normally, this year we’ve felt really happy with the balance of the car the minute we roll off the truck, but we kind of stalled with it this weekend. Didn’t know what to expect, but the guys did a great job and turned the car around and I was pretty happy with the car in qualifying.”

Lexus’ first pole of the season came back at Mid-Ohio Sports Car Course in May, also at the hands of Hawksworth. The No. 15 and its sister car, the No. 14 of Dominik Baumann and Kyle Marcelli, led every lap of that race, with the No. 14 delivering Lexus’ first win in the WeatherTech Championship. The No. 14 qualified third for Sunday’s six-hour race.

“Obviously, it was a great performance at Mid-Ohio and a great victory for the team,” said Hawksworth. “Alongside that and all the highlights, we’ve run top five pretty much everywhere we’ve gone. The car’s been fast, it’s been reliable, and the execution from the team has been a lot better this year. As a team, we’ve evolved in every department and obviously you can see the results with how things have gone this year. It’s certainly very promising.”

Starting between the two Lexus race cars will be the No. 29 Montaplast by Land Motorsport Audi R8 LMS GT3, a team entered in the four Tequila Patron North American Endurance Cup events on the WeatherTech Championship schedule. Christopher Mies qualified the car and will share driving duties at with Sheldon van der Linde.

Additionally, the top eight cars – made up of six different manufacturers – in the 18-car GTD field were all within one second of Hawksworth’s time.

﻿The Sahlen’s Six Hours of The Glen will be televised live on FS1 beginning at 9:30 a.m. ET on Sunday. Live IMSA Radio coverage also is available on IMSA.com, RadioLeMans.com and SiriusXM Radio.