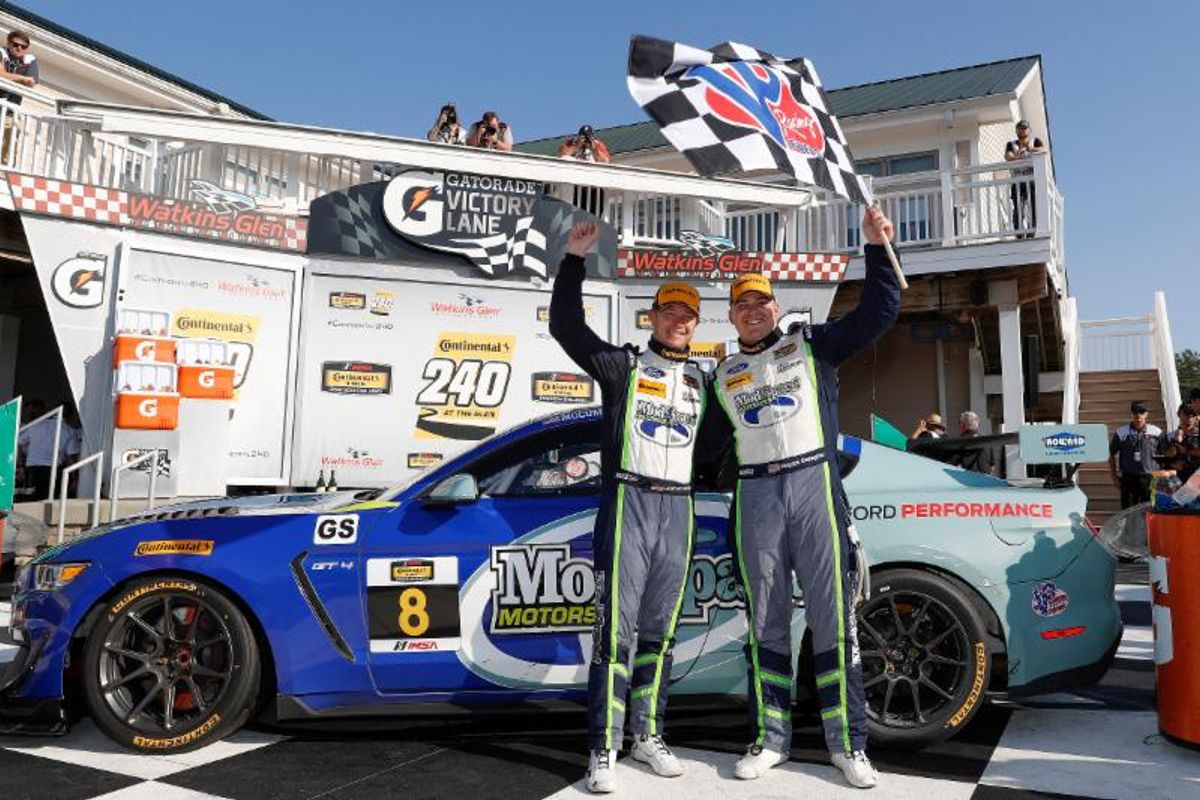 In a warm, four-hour IMSA Continental Tire SportsCar Challenge race Saturday at Watkins Glen International, thrills and heartaches were abundant, but there was one Grand Sport (GS) class team that had consistency throughout.

The No. 8 Multimatic Motorsports Ford Mustang GT4 of Chad McCumbee and Patrick Gallagher started the Continental Tire 240 in second place behind another fellow Mustang, the No. 80 AWA Ford of Martin Barkey and Brett Sandberg.

The No. 80 set sail for the first 37 laps but was involved in a mid-race incident with another GS car, resulting in significant rear end damage too difficult to overcome. Meanwhile, the No. 8 Mustang was sitting patiently in second place and when the opportunity presented itself, the team seized it and never looked back.

The GS win is a first for both drivers, as Gallagher is in the midst of his rookie season and McCumbee’s previous six wins came in the Street Tuner class in a Mazda MX-5.

“This is awesome and what a race to [get back to Victory Lane],” said McCumbee, who also co-drove with Gallagher in the Mazda MX-5 Cup Series. “Watkins Glen is one of my favorite sports car tracks. I didn’t come from road course racing, but this has quickly become one of my favorites. Hats off to ModSpace, all the guys at Multimatic, Mazda and Ford. There are so many people that got Patrick and I in this position and I am very thankful.”

After the team’s nearly flawless performance at Mid-Ohio Sports Car Course one race ago – in which the No. 8 started from the pole but wound up second, narrowly missing the victory – the team was closing in on a victory.

“Chad did a great job all day and the guys at Multimatic and ModSpace gave us a good rig, so hats off to them and all the guys in the heat changing our tires and stuff,” said Gallagher. “We were knocking on the door of a win at Mid-Ohio and I’m glad we finally got one here. I’d have liked to win at Mid-Ohio being a Buckeye, but I’ll take this one too.”

By the end of the race, the No. 8 built a large enough lead to cruise to victory, but the battle for the remaining podium spots was close. Tyler Cooke in the No. 82 BimmerWorld Racing BMW 328i charged through the top five during the last half hour of the race to finish second with co-driver and BimmerWorld Team Owner James Clay, the team’s third podium in four races.

Taking the last spot on the podium were Nate Stacy and Kyle Marcelli in the No. 60 Roush Performance / KohR Motorsports Ford Mustang. After back-to-back wins at Sebring International Raceway in March and at Mid-Ohio, a third-place result keeps the team’s podium streak alive heading into the halfway point of the season next week at Canadian Tire Motorsport Park.

Bryce Ward, driver of the No. 57 GS class entry, was transported to Schuyler Hospital after an incident during the race. He underwent a CT scan on his head and was diagnosed with a concussion.

The team’s No. 75 Audi RS3 LMS of Pierre Kleinubing and Roy Block started from the pole but was involved in a first-lap incident that ended its chances for victory. As a result, the remaining TCR teams jumped at the opportunity, especially eEuroparts.com Racing.

The No. 12 Audi of Kenton Koch and Tom O’Gorman led the most laps of any TCR car with 47, but ultimately it was the No. 77 Compass Racing Audi of Tom Long and Britt Casey, Jr. that found its way back to the lead when it mattered, leading the last 16 laps before taking the checkered flag.

“It was great racing,” said Long. “It’s always exciting having more cars come with the series. The eEuroparts car was there with us as a new entry, really tough. I got a good clean pass on him coming up in traffic, using it to our advantage.

“Then I just put my head down and drove. We were lucky enough to check out on him and I just love this track. I’ve got to really thank Watkins Glen and IMSA for putting on a great event here.”

Long and Casey, Jr. swept the two Continental Tire Challenge endurance races this season in the TCR class, as the No. 77 also took the four-hour victory at the season-opening BMW Endurance Challenge at Daytona International Speedway in January.

“Our car was amazing, the guys had it so hooked up,” said Casey, Jr. “With these endurance races, we are more worried about car longevity and the tire. It works and we just proved it. It’s a great day.”

The remaining Compass Racing Audi, the No. 74 of Kuno Wittmer and Rodrigo Sales – who entered the weekend with two consecutive wins in the class – finished second.

Rounding out the podium was the No. 54 JDC-Miller Motorsports Audi RS3 LMS of Michael Johnson and co-driver Stephen Simpson. The third-place finish – the team’s best since entering the Continental Tire Challenge two years ago – was especially sweet for Johnson, a paraplegic since the age of 12.

“This is something I’ve been working towards since I started in cars in 2009 and finally we have that podium,” said Johnson. “It finally shows that I can really do it and I’m so happy about that and all the work that I put into it. “

For the third consecutive race, a MINI drove into victory lane in the Continental Tire Challenge Street Tuner (ST) class and for the second time this season, it was the No. 52 MINI JCW.

Piloted by Mark Pombo – who was part of the No. 52’s winning lineup at Sebring International Raceway in March – and rookie Colin Mullan, the MINI JCW Team inherited the lead late in the race and never let go. The victory brings MINI JCW Team’s total win count in the series to four, all of which have come in the last two seasons.

While the MINIs ran consistently throughout the four-hour race, it was the No. 81 BMW of Devin Jones and Nick Galante that appeared to be unstoppable. However, an equipment issue during a pit stop in the final hour halted the team’s run and dropped them to second place, ultimately their finishing result.
Finishing third for the second time this season was the No. 21 Bodymotion Racing Porsche Cayman of Max Faulkner and Jason Rabe.