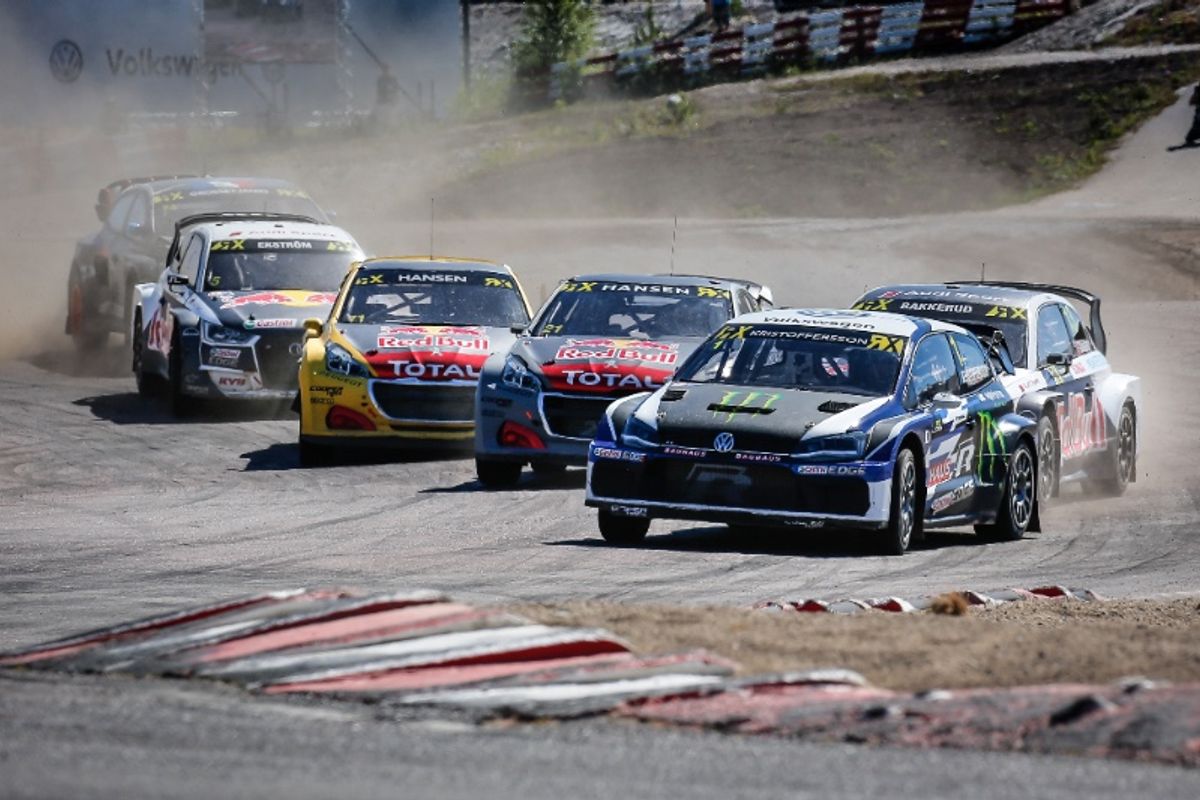 Swedish hero Johan Kristoffersson starred on the way to his fifth victory of the season in round six of the FIA World Rallycross Championship presented by Monster Energy at the Swecon World RX of Sweden in Holjes.

PSRX Volkswagen Sweden’s Kristoffersson claimed his third maximum points score in a row to extend his lead in the World RX Drivers’ Championship as PSRX continues to lead the Teams’ Championship points race.

Norway’s Andreas Bakkerud continued an impressive run of Holjes podiums stretching back to 2012 with second, after overtaking Team Peugeot Total’s Timmy Hansen on the last lap of the final. France’s Jerome Grosset-Janin secured GC Kompetition’s first podium finish with third place in front of a record 51,600 fans at the famous circuit.

“It was an amazing weekend here again. I won last year – to be able to win at Holjes is something extra special. The track is amazing and it’s a big challenge for the cars, drivers and engineers. I felt more and more comfortable with every outing over the weekend and at the end of Sunday I felt very comfortable – that’s what it takes to win,” said Kristoffersson, who also secured the Monster Energy Supercharge Award for having the fastest reaction time at the start of the final in his Volkswagen Polo R Supercar. “This is the first Monster Energy Supercharge Award I have won since France last year so it’s been a while, I’m pleased about that. The atmosphere here is something amazing, today we had a big crowd and some nice weather so I think there were a lot of spectators who had a great time.”

EKS Audi Sport’s Bakkerud climbed to second in the World RX Drivers’ Championship with second place in the final, driving his Audi S1. “I’m very proud of my record of podium finishes here, but most of all I’m so happy with the work we have done to be able to get quicker in Q1 and Q2, so I just want to say a huge thanks to the guys that have helped me between the races and all of EKS Audi Sport,” said Bakkerud. “It’s nice to see that the work we put in is paying off and I’m super-pumped that we’re on the podium once again here at the Magic Weekend in Sweden in front of a record-breaking crowd. I just can’t wait for Canada now because that’s a good track for us.”

GC Kompetition’s  Grosset-Janin was tenth at the intermediate classification, battled through to third place in his semi-final to make it to the final in his Prodrive-built Renault Megane RS. From there the Frenchman went on to be classified third and earn the team’s first podium finish in only its sixth event.

“I am so happy the weekend ended this way. Of course I never imagined my first podium happening like this, but we were able to take advantage of all the opportunities that were presented to us today,” said a delighted Grosset-Janin. “It’s the work of the entire team and so many people that has finally paid off. We can’t forget that only three months ago rallycross was a world totally unknown to GCK and Prodrive. Now, we just have to keep up our good work and continue to progress.”

Sweden’s Mattias Ekstrom finished third on track in the final but was given a penalty for ‘pushing and overtaking’ Team Peugeot Total’s Timmy Hansen on the last lap – Hansen retiring with just two corners to go. Ekstrom was classified sixth. Kevin Hansen also started the final but didn’t make it beyond the second lap.

France’s Sebastien Loeb finished fourth in semi-final one ahead of Team STARD’s Janis Baumanis and GRX Taneco’s Niclas Gronholm. His team mate, Timur Timerzyanov, had his best event of the season but was like Niclas was slowed by a puncture and finished fourth in semi-final two. Norway’s Petter Solberg retired from the lead of semi-final two with technical problems and Olsbergs MSE’s Robin Larsson was classified sixth.

The third round of the FIA European Rallycross Championship for Supercar was won by Championship leader Reinis Nitiss to increase his lead in the standings. Norway’s Thomas Bryntesson scored his best result of the season in second and Sweden’s Lukas Walfridsson was third.

Belgium’s Guillaume De Ridder became the first double-winner of the 2018 RX2 International Series presented by Cooper Tires by claiming victory at Holjes. Norway’s Henrik Krogstad and Sweden’s Simon Olofsson finished second and third after a dramatic last lap of the final, to make it three nationalities on the podium.

The first FIA rallycross Champion of the season was crowned in the final round of the FIA European Rallycross Championship for TouringCar. Norway’s Fredrik Magnussen won the race but second place was enough for Sivert Svardal to win the Championship in his maiden international season by one point ahead of Magnussen. Kenneth Johansson finished third to make it an all-Norwegian podium.

James Taylor, Vice President, Rallycross at IMG, concluded: “Congratulations to Johan on another impressive victory, his performances over the first half of the season are more than worthy of his World Champion status. Over 50,000 fans at Holjes were treated to some amazing action this weekend and although Johan has a strong lead in the points, the competition between all of the teams is fierce. I’m delighted for GCK to have achieved its first podium as the team has worked incredibly hard for that. Andreas [Bakkerud] continuing his astounding run of podiums in Sweden shows how well he has fitted into the EKS Audi Sport team this season.”