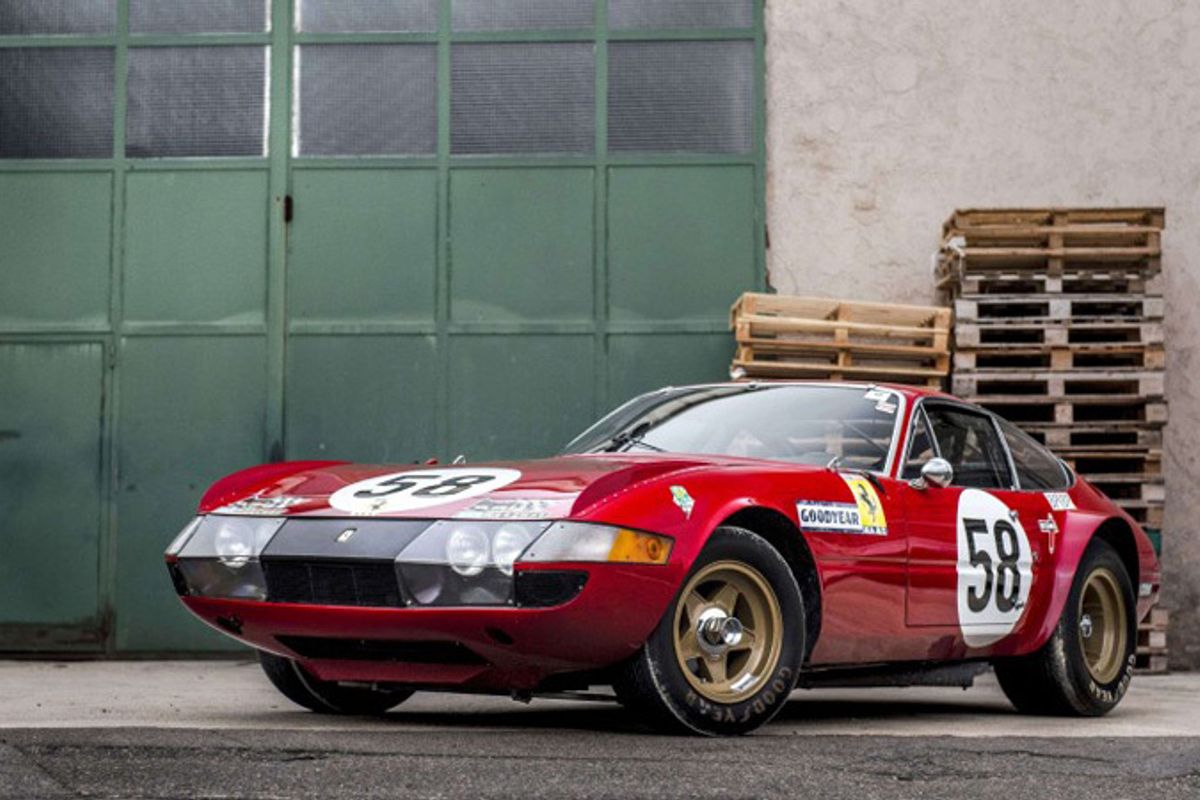 Ferrari has a place in the history of motor racing that few marques can match. Enzo Ferrari never ceased to build competition models, for all types of racing, in order to win. Motor racing fans around the world have been won over by the thousands of victories the marque has to its name. Presented at the Paris Motor Show in 1968, the new 365 GTB/4 Daytona was no different to previous models and would get its own "Competizione" version.
Daytona #12547, the first prototype, was sold in 1969 to Luigi Chinetti at N.A.R.T. to participate in the 1969 Le Mans 24 Hours. Red with a black stripe down the side, this car had aluminium bodywork, but glass windows, air conditioning and a standard rear exhaust. It weighed in at 1495kgs with an empty fuel tank! This first prototype was damaged in testing and never made it to the start at Le Mans. It did start the 1970 Daytona 24 Hours, but didn't see the checkered flag.

A second 365 GTB/4 Group 4 prototype, chassis n° 12467, the car on offer, was acquired directly from the factory by Chinetti on 10 June 1971. In the file, there is a copy of the dated cheque, for the sum of USD 11,630, annotated in the margin by Chinetti himself: "Full Payment of 365/ Daytona #12467 for Le Mans". The car was in fact prepared by the factory and delivered directly to the 24 Hours circuit by Ferrari; a copy of the transport bill issued on 7 June 1971 for 200,000 Italian lira is also in the file. Chassis #12467 was fully prepared to Group 4 spec, with the help of Carrozzeria Sports Cars, based next door to the factory, in order to comply with the stringent regulations for the class. A copy of a letter addressed to this subcontractor lists the necessary additional equipment required, such as battery cut-out, an adjustment to prevent the use of reverse gear, an FIA compliant roll-bar and other minor details. The car had a steel body with a side exhaust, and apart from the windscreen, the windows were plexiglass. It had larger headlights set behind vertical plexiglass, with switches on the roof and the front right-hand wing. The wings were slightly flared, and small spoilers added at the front. The fuel cap was set in the centre of the rear boot lid and the air-conditioning system was retained. The car weighed 1514kgs with 120 litres of fuel, equating to approximately 1396kg when empty, with an engine producing 400bhp.
For support in the 1971 Le Mans 24 Hours, Luigi Chinetti asked to borrow some mechanics from Diena to help with the 512M and from Pozzi for the Daytona 12467. "Coco" Chinetti, Luigi's son and Bob Grossman were the drivers. During the first testing session, Coco Chinetti complained that the ATE brakes weren't working efficiently. Pozzi's two French mechanics fitted some soft Abex pads which allowed Chinetti and Grossman to reduce the braking distances. However, these pads had to be changed every six hours at the front and 7h30 at the back.

Daytona 12467 ran like a dream right from the start at 16.00. Twenty-fifth after 3 hours, fifteenth after 12 hours, by the 19th hour it was running in fifth position. The car recorded its best lap time of 4'14" 3/10e during the race, some 7 seconds quicker than in testing! It retained its position to cross the finish line 5th overall and also win the Energy Index with an average consumption of 40 litres per 100 kms for the 4.218,752 km covered.
At the start of 1972, the car sold to Clive Baker, who ran the Baker Motor Co. team. The wings were widened, a large spoiler added at the front, angular fairings put in front of the lights and the bodywork was painted orange with white stripes. It was entered for the Daytona Six Hours and finished 15th, driven by Grossman and Reynolds. For the Sebring 12 Hours, on 25 March, it was fitted with glass windows and given a new front spoiler, to comply with the new FIA homologation requiring a minimum weight of 1350 kg without fuel. Grossman and Reynolds finished 19th. At Watkins Glen on 22 July, Reynolds and De Lorenzo brought the car home in 11th place. Chassis 12467 made a final appearance at the 1973 Sebring 12 Hours, but a mechanical problem prevented it from taking the start.
After that, this Daytona continued its life in the hands of various collectors including, twice, Bill Kontes and Rob Walton. It remained in the United States for some twenty years, before returning to Europe where the current owner has had the car inspected by Pozzi in Paris to obtain Ferrari Classiche certification. It will be delivered with its original engine block and a comprehensive file detailing the car's entire history from new, including details of the sale and delivery by the factory to Le Mans for its participation in the most legendary race in the world on 12 and 13 June 1971, where it finished 5th overall and won the Index of Performance.

The factory built 15 Ferrari 365 GTB/4 Daytona Group 4 cars and 2 prototypes. The car presented is the second prototype, the only one with such a racing history. This is therefore one of the most desirable examples of these highly successful Daytonas, eligible today for numerous historic race events including Le Mans Classic.
The Daytona Group IV is the future in historic racing competition and its value will continue to increase in the years to come, just like the most prestigious racing Ferrari cars.