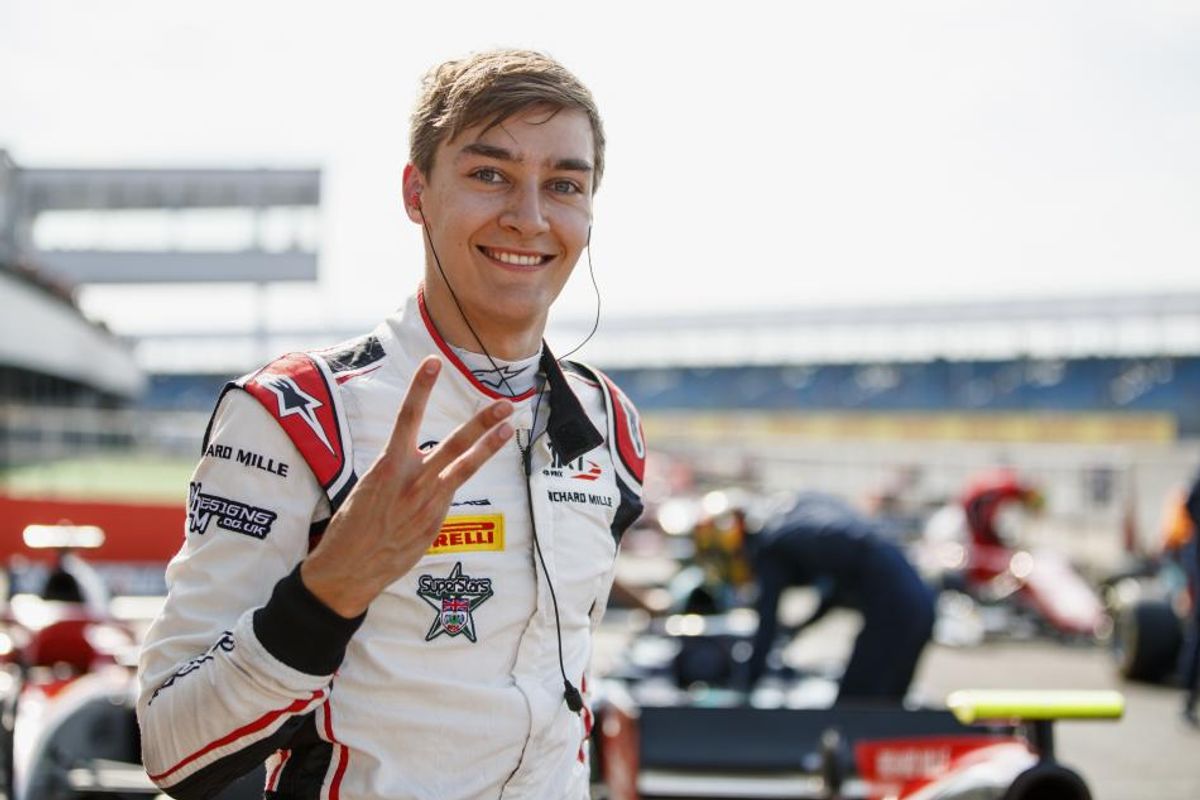 George Russell secured a third consecutive FIA Formula 2 Championship pole position in Qualifying at Silverstone, Great Britain, wowing the crowd at his home round with a 1:39.989 laptime. The ART Grand Prix driver will start ahead of DAMS’ Alexander Albon in tomorrow’s Feature Race, as Antonio Fuoco for Charouz Racing System will begin from third.

In warm and breezy conditions, the Trident duo of Santino Ferrucci and Arjun Maini were first to take to the track, with Russell and ART teammate Jack Aitken following behind them. Aitken was first to open the initial volley of timed laps, setting a lap in the 1m41s which was swiftly beaten by Russell. Louis Delétraz, Sergio Sette Camara and Alexander Albon were next to try their luck, but ultimately had to be content with splitting the ART pair as Russell’s lap stood strong in the early phases.

Shortly after a miraculous save from Lando Norris at Copse, having run too wide and losing control, a red flag was brought out for Roy Nissany’s stranded car to pause the session. Maini returned the session to full-speed running, and Russell extracted the last drops of grip from his first set of tyres to go a tenth faster than his previous best time. Before the majority of the field called in for new soft compound Pirellis, Fuoco set a 1:40.289 to go into the pits ahead of Russell.

Gunther was the first to hit the road after coming in for fresh rubber, as the flurry of final laps took place in the last five minutes. Climbing up the order, Gunther and Nyck de Vries briefly took third and fourth positions before Russell fired his way to a 1:39.989 to stand clear of the rest of the field. Albon got closest, setting a time within a tenth of a second of the British driver to go second, and Fuoco’s later improvement of two tenths was not enough to help him return to the top of the timesheets.

Russell, matching Albon’s season record of three consecutive poles, will lead the field away tomorrow in the Feature Race ahead of Albon, as Fuoco and Delétraz lock out the second row for Charouz. Sette Camara and Norris will begin from fifth and sixth, with Maini seventh. Artem Markelov completed a late lap to secure eighth, while Luca Ghiotto and Maximilian Gunther complete the top 10.