Vettel wins British Grand Prix ahead of Hamilton and Raikkonen 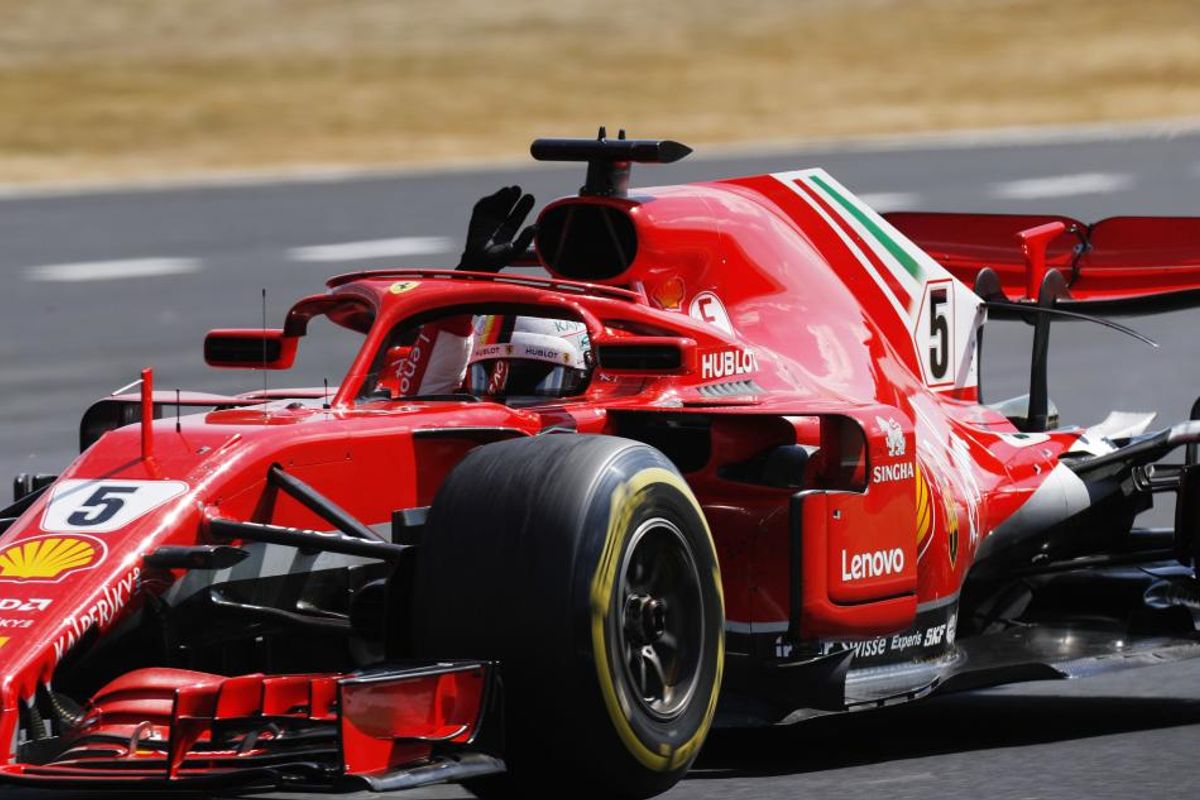 Sebastian Vettel capitalised on a Turn 1 collision between Kimi Räikkonen and Lrewis Hamilton that sent the Briton to the back of the field to claim his 51st career win at the British Grand Prix. Hamilton later staged a superb recover to finish second ahead of the second Ferrari of Kimi Räikkönen.

At the start, Vettel got away superbly to take the lead ahead of pole position man Hamilton. The Briton’s team-mate Valtteri Bottas also swept past and Hamilton found himself third as the field went through Abbey.

The situation was then made worse for Hamilton as Raikkonen braked too late and collided with the right rear of the Briton’s Mercedes. Hamilton spun off track and dropped to 17th place. Raikkonen later received a 10-second time penalty for causing the collision.

At the front, Vettel was free to pull away and by lap eight the German had built a 5.7s lead over Bottas, with Red Bull’s Max Verstappen a further four seconds behind. Raikkonen was now fourth ahead of the second Red Bull of Daniel Ricciardo and the Renault of Nico Hulkenberg.

However, Hamilton was powering through the pack, and on lap eight he had climbed back to eighth place behind Sauber’s Charles Leclerc. He was, however, now 25.7s behind Vettel. He made light work of passing the Monegasque and then breezed past Hulkenberg on lap 10 to sit 13.0 behind fifth-placed Ricciardo.

Raikkonen pitted on lap 13 to serve his penalty and after the hold he took on medium tyres to emerge in 10th place.

Verstappen was the next to pit, on lap 17, with the Dutchman also taking medium tyres. The Red Bull driver emerged in fifth place.

Behind him, Raikkonen was now on a march and in short order he dismissed Carlos Sainz, Esteban Ocon, Leclerc and Nico Hulkenberg to sit in sixth place ahead of the next pit stop, on lap 18, for Ricciardo.

Leclerc was the next to visit pit lane but immediately after his pit stop he reported a problem and he was told to stop his Sauber. He pulled off track at Turn 3 where his strong run of recent points finishes ended.

Vettel then pitted on lap 20, taking on medium tyres. He rejoined in the lead and after Bottas made his stop the German led ahead of the Finn and Hamilton. Hamilton was now 5.8s behind the championship leader but he required a pit stop.

That stop arrived on lap 25, with the Mercedes driver taking on mediums. He rejoined the action on sixth place, 11s behind Raikkonen and 28.2s behind race leader Vettel.

The German was now 3.5s clear of Bottas, with Verstappen almost 10 seconds further back and with Ricciardo fourth ahead Raikkonen.

Bottas then began to close up to Vettel and on lap 30 the gap was down to 2.8s. Hamilton too was picking up the pace and by lap 30 he was running quickest and closing in on Raikkonen.

Red Bull then pitted Ricciardo for a second time on lap 30, with the Australian taking on a fresh set of soft tyres. He rejoined in sixth place, behind Hamilton, who was now just 4.9s behind Raikkonen.

The complexion of the race changed completely on lap 32. Marcus Ericsson overcooked his entry to Turn 1 and he lost the front end of his car. He spun and careered off track and into the barriers.

The safety car was immediately deployed and during the caution, Vettel, Verstappen and Raikkonen all pitted for fresh soft tyres as the field bunched up.

Bottas now led the race behind the SC, with Vettel second ahead of Hamilton, Verstappen, Raikkonen and Ricciardo.

On the restart Bottas held his advantage ahead of Vettel and Hamilton, bit behind them Raikkonen attacked Verstappen. He passed the Dutchman but the Red Bull driver returned the favour in the next corner and he held onto fourth place.

The Safety Car was almost immediately deployed again as behind the leaders Carlos Sainz tried to pass Romain Grosjean in to Copse. It was tight, with Sainz leaving little room, and the result was that the Frenchman clipped the back of the Spaniard’s Renault and they both went off track and out of the race.

The Safety Car left the track at the end of lap 41 and Bottas again held the lead ahead of Vettel and Hamilton, with Verstappen fourth ahead of Raikkonen and Ricciardo.

Vettel than began to exert pressure on Bottas and after a long tussle the German managed to sneak past the Finn with a good move under braking into Brooklands.

Behind them Verstappen spun and then retired from the race.

Bottas, whose tyres were fading, was then passed by Hamilton and he quickly slipped into the clutches of Raikkonen who brushed past his compatriot to take P3.

And that was the way it stayed with Vettel crossing the line ahead of Hamilton to take his 51st career win, putting him tied third with Alain Prost on the list of most wins in F1.

Hamilton’s superb recovery from the back of the field was matched to some degree by Räikkönen’s march to the podium from 10th after serving his penalty. Bottas was fourth ahead of Ricciardo with Hulkenberg sixth for Renault. Esteban Ocon took seventh for Force India ahead of McLaren’s Fernando Alonso, Haas’ Kevin Magnussen and the Toro Rosso of Pierre Gasly.