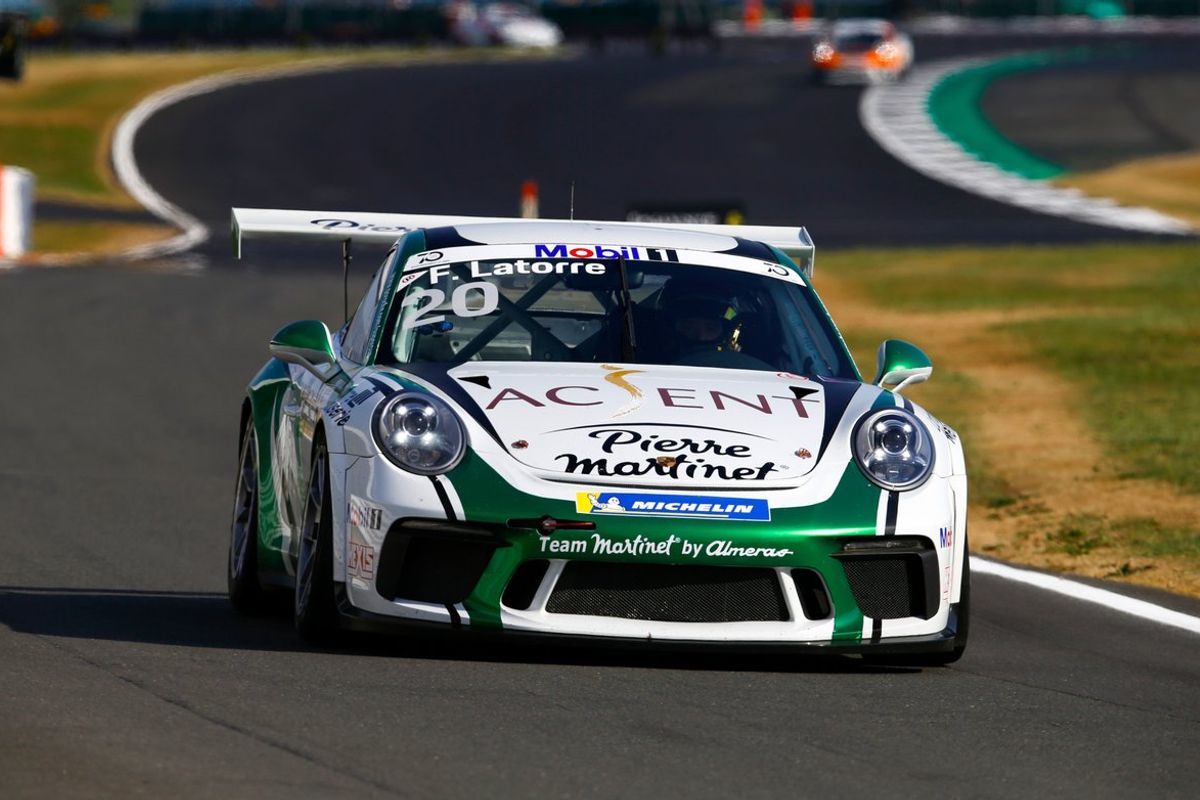 Florian Latorre (martinet by ALMERAS) scored a lights-to-flag victory at round four of the Porsche Mobil 1 Supercup at the Silverstone Circuit. “I feel simply fantastic after my first Supercup victory. Michael Ammermüller was waiting for me to make a mistake but I didn’t let that intimidate me,” said the Frenchman. Germany’s Michael Ammermüller (BWT Lechner Racing) ultimately brought his 485 hp Porsche 911 GT3 Cup over the finish line in second place, with third place going to Mattia Drudi (Dinamic Motorsport) from Italy.

While 21-year-old Latorre from Bordeaux made a clean start and pulled clear of the field, behind him several drivers were shuffling for positions: Starting from the third grid spot, Drudi immediately put Ammermüller under pressure. In lap four, the Italian overtook the seasoned Porsche specialist who had started from P2. Three laps later, however, Ammermüller made a countermove to snatch back second place. When the safety car was deployed in lap nine, the field bunched up again. After the restart, Latorre and Ammermüller treated F1 fans on the packed grandstands to a gripping battle for the lead, with the Almeras driver fending off all attacks from the points’ leader. “At the end I was really fast and I would have liked to overtake Florian Latorre. But the risk was too high, so I’m satisfied with second place,” said Ammermüller.

In a temperature of 25-degree Celsius and sunshine, Drudi was flagged off in third place just 0.7 seconds behind the German. For the 19-year-old race driver from Misano Adriatico in the Province of Rimini, this was his first podium result so far this season. “I got away well at the start, but Michael Ammermüller got faster over the course of the race and I had to let him pass,” said Drudi. Fourth place was claimed by Larry ten Voorde (Team Project 1) from the Netherlands. The best British driver of the day was Nick Yelloly (Fach Auto Tech) in fifth. Zaid Ashkanani (KWT/MRS GT-Racing) occupied sixth place ahead of the guest driver Dino Zamparelli (GB/BWT Lechner Racing).

The Porsche Junior Thomas Preining (BWT Lechner Racing) managed to make up two positions in the race, with the Austrian progressing from tenth on the grid to cross the finish line on the 5.891-kilometre circuit in eighth. “It was a difficult race for me in the hotly contested mid-field. I didn’t want to take any unnecessary risks and get caught up in a crash, so my result is okay,” said 19-year-old Preining. The best driver in the ProAm class was Roar Lindland (N/Lechner Racing Middle East), who turned 41 on Sunday.

Porsche Junior Julien Andlauer (martinet by ALMERAS) will travel home empty-handed after the Frenchman had to call it quits after nine laps. At the time of his retirement the defending champion of the Porsche Carrera Cup France had been running in sixth place. “It was an intense race with lots of fights for positions. I was going strong after the start but unfortunately I had to return to the pits after a collision,” said Andlauer.

Britain’s Chris Harris also took up the challenge of the Porsche Mobil 1 Supercup at Silverstone. As a VIP driver, the popular YouTuber took the wheel of the Porsche AG vehicle sporting the legendary starting number 911. The presenter of the British motoring magazine Top Gear had qualified the vehicle on P27 and concluded the race in 26th place. “I managed to make up a couple of positions after the start, but a spin threw me back. The race was huge fun and at least I didn’t come last – that was my goal,” said Harris after his debut in the international one-make cup.

After the race on the Silverstone Circuit, Ammermüller retains his lead in the championship with 65 points for the Lechner driver. Yelloly ranks second nine points behind the German. Pereira is third with 46 points.

Round five of the Porsche Mobil 1 Supercup is contested as support to the Formula One race at Hockenheim from 20 to 22 July. This race celebrates the return of the series to Germany after a year’s break. Since the 1993 debut season, the Porsche Mobil1 Supercup has raced on the Hockenheimring Baden-Württemberg track a total of 20 times.