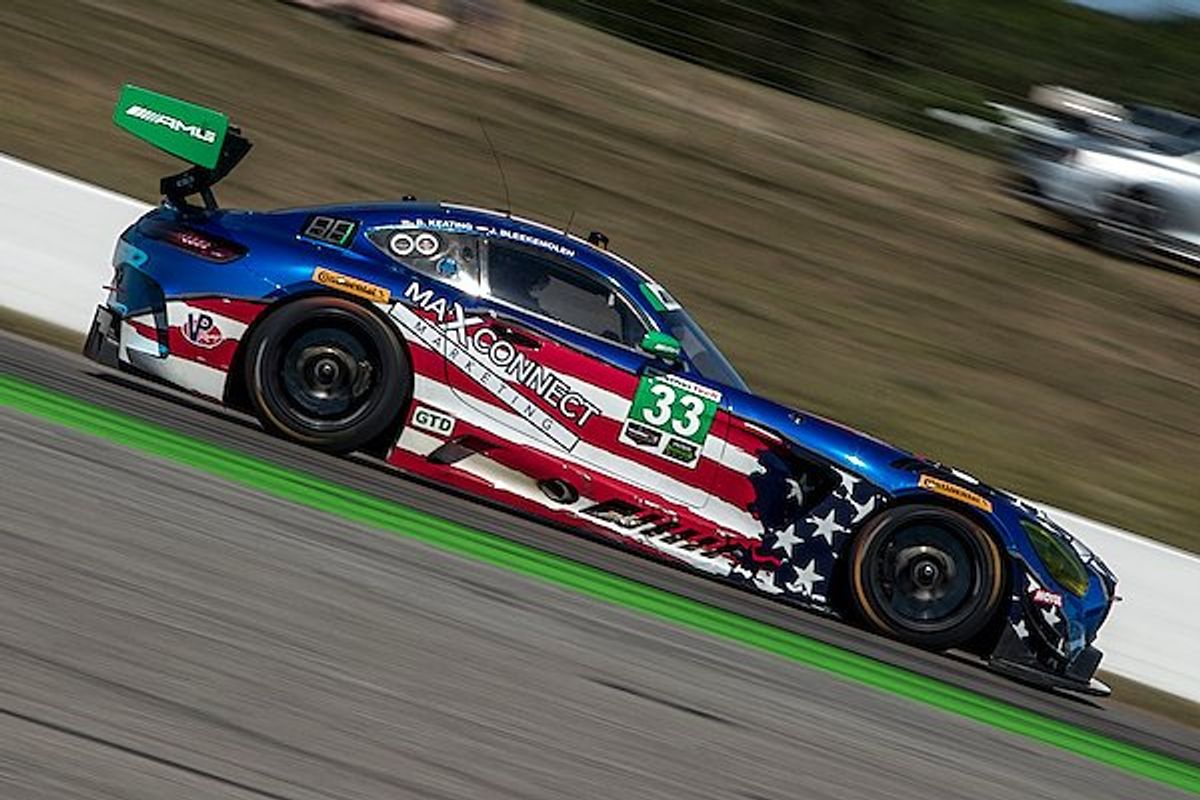 Closing driver Bleekemolen took the lead for the second and final time one lap after a yellow-flag restart with just under 15 minutes remaining. Bleekemolen pulled alongside and passed the race leading Lexus coming out of the final turns on the fast 2.459-mile circuit and then defended the lead through the sixth and final yellow-flag restart of the race to seal the victory.

Keating started the race after a season-best qualifying effort of fourth on Saturday and stayed in the lead pack throughout his 50-minute race-opening stint.

Quick work by the Mercedes-AMG Team Riley crew put Bleekemolen back on track in third after the driver change pit stop. He took the lead for the first time 30 minutes later, running up front from laps 50 through 70, and then dashing to the pits for the No. 33’s final stop of the race.

Bleekemolen continued in the top three and gradually reeled in the leaders over the next 45 minutes as the Mercedes-AMG GT3 proved to have superior long-run tire wear over the competition. After pulling off the winning pass, Bleekemolen led the final 12 laps for a 2.919 seconds margin of victory. In total, Bleekemolen and the No. 33 led the race for 33 laps.

The victory was third career triumph for Keating and Bleekemolen in the No. 33 Mercedes-AMG GT3, and the first since winning at Circuit of the Americas in May of last year. The No. 33 team gave the Mercedes-AMG GT3 its first victory in North America in March of 2017 in the 12 Hours of Sebring.

Keating, Bleekemolen and the No. 33 team entered the weekend 21 points behind the championship leader and 20 points shy of the second-place competitor. They are now 14 points out of the lead and just 11 markers behind second place.

Next up for Mercedes-AMG Motorsport Customer Racing teams and the IMSA WeatherTech SportsCar Championship is Round 7 of 11 GTD races on the 2018 schedule at Lime Rock Park in Connecticut, July 20 – 21. The Northeast Grand Prix at Lime Rock can be seen in same-day coverage, Saturday, July 21, on FOX Sports 1 (FS1) at 4 p.m. EDT.

Ben Keating, Driver – No. 33 Mercedes-AMG Team Riley Motorsports Mercedes-AMG GT3: “It feels really good. We had a really good Mercedes-AMG GT3 today and all weekend. We came out of the truck with this setup, we really hit it well, and I’m so grateful that the Mercedes-AMG GT3 is good on tires. The Lexus guys were quick, but the leading one went wide coming onto the front straight for the opportunity we needed. The Mercedes-AMG Team Riley guys kept us up front with their great pit stops which is huge at a place like this. This is such a hard place to pass, and this race had a lot of yellows. A lot of really fast cars in practice could never get clear of the traffic in the race. If you are up front and you can run in clean air, it is just such a huge difference maker as far as pace. Really, this car is not much different than what we had at Mid-Ohio, but that just shows how much the Mercedes-AMG GT3 likes this place. We scored our first GTD win as a team here in 2014, and it’s great to be back on the podium again in Canada. It has been more than a year since we have won a race, so this is just great."

Jeroen Bleekemolen, Driver – No. 33 Mercedes-AMG Team Riley Motorsports Mercedes-AMG GT3: “It was hard work, especially with the yellows, everybody struggled for grip. They tried to clean the track but there were lots of marbles out there. You could see the cars sliding around a lot more than before, really edgy and on the limit, but our Mercedes-AMG GT3 seemed a little better than most. I made the move for the win through Turn 9 and into 10. The leader had a little slide going and I got inside of him there. He gave me the space so I took it, and he didn’t have much of a run left coming out. I got on the outside and from there I could finish it. It’s a tough place to pass here but we did it.”

Bill Riley, Team Owner – Mercedes-AMG Team Riley Motorsports: “For sure, it definitely helps turn everything a little bit in our favor in the championship, especially going into the next race. We are pretty excited about the win today. It’s a great victory for the Mercedes-AMG and for us as a team. Everybody pulled together. We had some decisions to make on the box strategy wise and we all pulled together and got it done. Our engineers Tyler Hook and Matt Bejnarowicz did a great job in working together on a starting setup for here. With some things that happened earlier in the week, Matt was able to become a backup engineer on the No. 33, and the setup was almost perfect off the truck.”