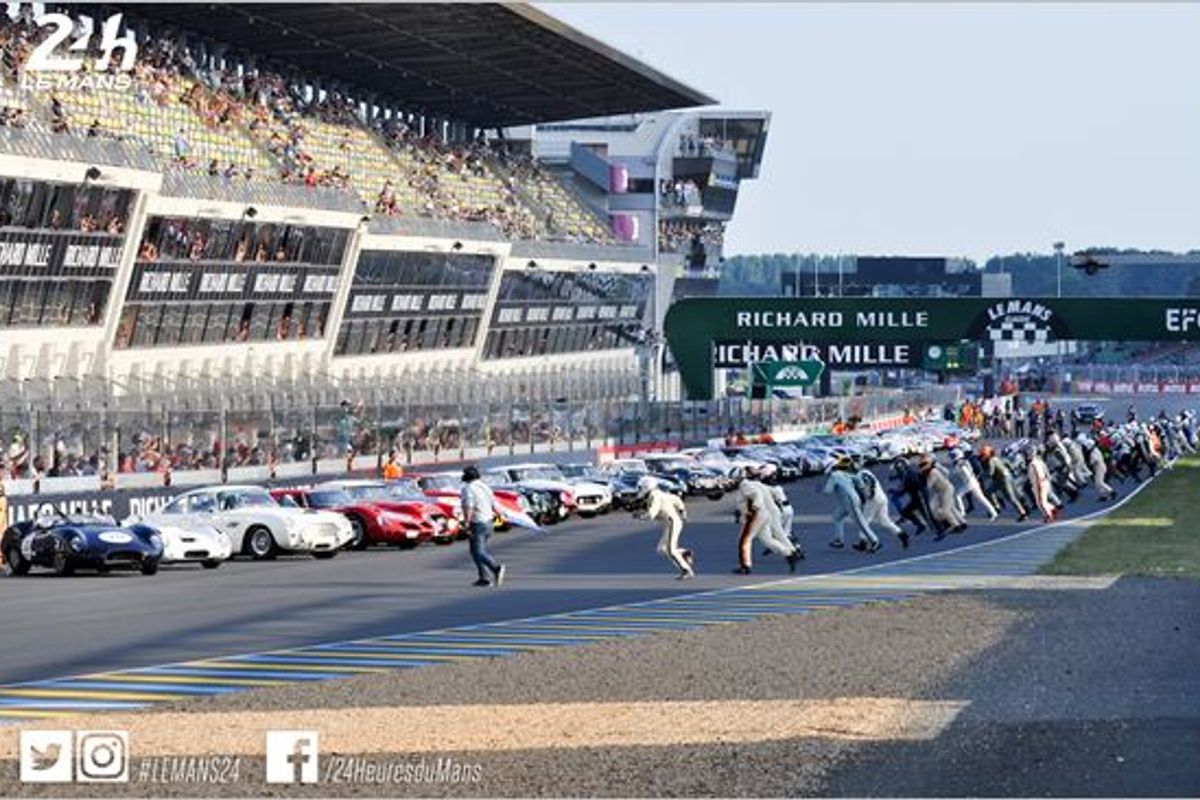 The number of historic racing cars that continues to increase event after event, drivers coming from all over the world plus more car clubs, exhibitors and activities all confirm the undeniable growth of Le Mans Classic since its creation in 2002.

This biennial event, an exceptional mega-sized retrospective of the history of the iconic 24-Hours race, jointly organised by Peter Auto and the Automobile Club de l’Ouest, has fired the enthusiasm of a growing number of collectors who come to take advantage of this unique opportunity to race on the big Le Mans circuit. And, of course, the same goes for the public who flocked to the event in even greater numbers than at previous Le Mans Classics as proved by a new attendance record of 135 000 spectators, all generations combined, present at this weekend’s races. This figure represents an increase of 10% compared to the 2016 retrospective!

At 16:00, the chequered flag brought down the curtain on the 9th staging of Le Mans Classic. All the ingredients were assembled for this exceptional celebration of the motor car to continue the success of the previous meetings: glorious weather, 24 hours retracing the history of the greatest endurance race in the world over a period from 1923 to 2014 with more than 700 historic racing cars, over 1000 drivers from 30 nationalities, ten former winners of the 24 Hours, nine grids for the races as well as parades and demonstrations on the track; without forgetting the presence of 8 500 cars brought along by 200 clubs representing 60 makes, the commemorations of Porsche’s 70th anniversary and the 40th of Alpine’s outright victory in the Le Mans 24 Hours, the Artcurial auction, the Le Mans Heritage Club’s concours, Little Big Mans and two hundred exhibitors dedicated to the world of historic cars and the motor car in general, etc.

The weekend kicked off on Friday with day and night-time practice for all the entrants. In the village, the public was invited for the first time to attend a conference to which Pierre Fillon (President of the Automobile Club de l’Ouest), Patrick Peter (founder of Peter Auto) and nine former winners of the Sarthe event: Derek Bell, Jürgen Barth, Romain Dumas, Loïc Duval, Jan Lammers, Gérard Larousse, Klaus Ludwig, Stéphane Ortelli, and Henri Pescarolo were invited: he holds the record for the highest number of outings in the race with 33 crowned with 4 victories. Also on hand were other well-known French drivers like René Arnoux, Jacques Laffite, Jean Ragnotti and Paul Belmondo. This conference was the theatre of a rare moment of sharing around a common passion, which the crowd and drivers greatly appreciated, especially the latter who discovered that their renown among the fans remains as strong as ever!

The festivities really got off the ground on Saturday morning with the on-track action that never stopped from that moment onwards. After the opening parades of cars from clubs and from the Le Mans Heritage Club with 24 cars that had left their mark on the history of the Sarthe event, the Jaguar Classic Challenge kick-started the weekend’s races. On the track were almost 60 cars that had forged the Coventry make’s legend (Type Cs, Ds, Es XKs plus MKIs and MKIIs. The race lasted 60 minutes and victory went to English driver Martin O’Connell in his E-Type.

Then it was the turn of the more recent and iconic Group C prototypes, back on their favourite hunting ground for the second time in succession, with a total of 40 of the most beautiful cars in this particular category: Porsche 956s and 962s, XJR 8, 9, 11, 12 and 14 Jaguars, Peugeot 905s, Toyota 85Cs, Nissan R90s, Courage C26s, Rondeau M382s as well as entries representing Spice, Tiga, ALD, etc. It gave spectators the opportunity to relive a period that specialists consider as the Golden Age of endurance racing in a 45-minute event won by Briton Michael Lyons in a 1991 Gebhardt C91.

The major newcomer at the 2018 event, the Golden Endurance Legends, then took to the track ushering Le Mans Classic into another era with the GT1s and LM P1s of the 1990s and 2000s. This demonstration grid helped Le Mans Classic to extend its retrospective of the Le Mans 24 Hours to 2016 with legendary cars like the Audi R8, Bentley Speed 8, Peugeot 908 HDI, Pescarolo 01 (driven by Henri Pescarolo himself), Toyota GT-One (entrusted to Emmanuel Collard, one of the team’s drivers at the time), the Alpine A460, Ferrari 333 SP, McLaren F1 GTR, Maserati MC12, Chrysler Viper GTS-R, Venturi, Saleen S7-R, Panoz Esperante, etc, which all revived recent memories.

To celebrate Porsche’s 70th anniversary an exceptional parade set off for a lap of the circuit. Leading it was the first car built by the German make, the no. 1 365 homologated on 8th June 1948: it was driven by Felix Porsche, grandson of Ferdinand Porsche founder of the make, and Felix Lange, Félix Porsche’s cousin and Ferdinand Piëch’s grandson. The cars that followed it came from the Porsche museum in Stuttgart: a 911 Carrera RSR from 1971 driven by Derek Bell (five-time winner of the Le Mans 24 Hours), a 911 2.5 ST with Marc Meurer (Porsche France General Manager) at the wheel, a 906 Carrera (1966) for Romain Dumas (two-time winner of the race), a 908/3 for Henri Pescarolo (four-time winner), Richard Mille (main partner of Le Mans Classic with EFG) in a 962 and the GT1 victorious in the 1998 race with Stéphane Ortelli (one of the winning trio) in the cockpit. They retraced different decades of Porsche Racing’s competition history. Shortly afterwards came the Porsche Classic Race Le Mans. It was organised in collaboration with Porsche France to celebrate this historic anniversary and more than 70 Porsches covering the period 1952 to 1973 ranging from the 365 Pre-A to the 911 RSR 2.8L as well as the 904 Carrera GTS, Carrera 6s and 910s, and 914/6s took part in the one-hour event with the 908 LH driven by Frenchman, Ewens Stievenart, emerging as the winner.

On Saturday football player, Didier Drogba, whose career began in Le Mans, was invited by GANT (the official clothing supplier for the Le Mans 24 Hours and Le Mans Classic) to give the start of Little Big Mans at 15:30. Almost 100 young drivers ranging from 7 to 12 years of age ran towards their cars, scale-model replicas of those that had raced in the Le Mans 24 Hours, to cover a part of the Bugatti circuit.

Once the parade by the budding drivers was over the cars in grid 1 (pre-war - 1923-1939) got ready for the official start of the 9th Le Mans Classic. At 16:00 Sébastien Loeb (nine-time world rally champion) and Felipe Massa (269 F1 grands prix and 11 victories), both friends of the Richard Mille brand, waved the French flag together to release men and machines to tackle the challenge of the 24-Hours circuit. The race for the six grids covering the period from 1923 to 1981 was launched and it would continue until the afternoon of the following day.

This year, the party in the village had a new dimension as it invited the public to plunge into the very heart of this fantastic retrospective and enjoy the many activities/entertainment on offer. A few hours earlier the Artcurial Motorcars auction run by Maître Hervé Poulain accompanied by Matthieu Lamoure and Pierre Novikoff set a new record for the fifth sale held at Le Mans Classic. After more than four hours’ auctioneering 30 lots of more than 200 000 € and two of over a million euros were sold setting four world records and achieving a figure of 12.6 million euros. Mercedes-Benz was the star, in particular lot 9, a 1963 300 SL Roadster that had only 1380 km on the clock and a single owner. It was the object of a long bidding war and it finally went under the hammer for 3 143 000 euros, twice its estimate setting a new record for this model at an auction. Another record was set by a flag used to give the start to the Le Mans 24 Hours that went for 32 500 €, more than 32 times its estimate!

Another highlight of the event was the prestigious Concours Le Mans Heritage Club, which brought together 24 specially hand-picked cars that had all taken part in the Le Mans 24 Hours between 1923 and the present. The jury comprising several specialists from the world of the motor car awarded the following prizes this afternoon (Sunday):

The Clubs’ Competition also awarded the following prizes to the winners:

Prize: 10 packages with access paddock and pit grandstand for the 2020 event.

At the end of this event, which broke all the records, and further consolidated the success of Le Mans Classic among its loyal public and a large number of new visitors, all eyes are now turned to 2020 the year in which the 10th staging of Le Mans Classic will be celebrated. This anniversary will be commemorated in the style it deserves and already new projects are being studied to offer an even more exciting renewed spectacle.
Pierre Fillon, President of the Automobile Club de l’Ouest: “Obviously, the success of the 9th staging of Le Mans Classic is a huge source of satisfaction and pride and an immense pleasure for us as organiser together with Peter Auto. The enthusiasm of all these entrants, these collectors, exhibitors and above all the many spectators who come to see these cars that have taken part in the Le Mans 24 Hours or in endurance events is proof that the legend of this branch of motor sport and this iconic race is still alive and kicking. This success reinforces us in our mission at the ACO on a daily basis: namely, to continue in the same vein and boost the history of the 24 Hours in the present and in the future.”

Patrick Peter, founder of Peter Auto: “The ninth staging has shown a big step forward in terms of attendance figures. The entrants, the public and all the players in the event have also told us how satisfied they are. We’re managing to develop Le Mans Classic and renew and complete our programme to offer the public new activities and events at each staging. This year, the arrival of the Global Endurance Legends enabled us to extend our retrospective of the Le Mans 24 Hours to 2016 thus answering the expectations of a younger public. We offered this year’s visitors to Le Mans Classic 93 years of the history of the greatest endurance race in the world as well as a privileged opportunity to get close to the historic cars and their drivers.”