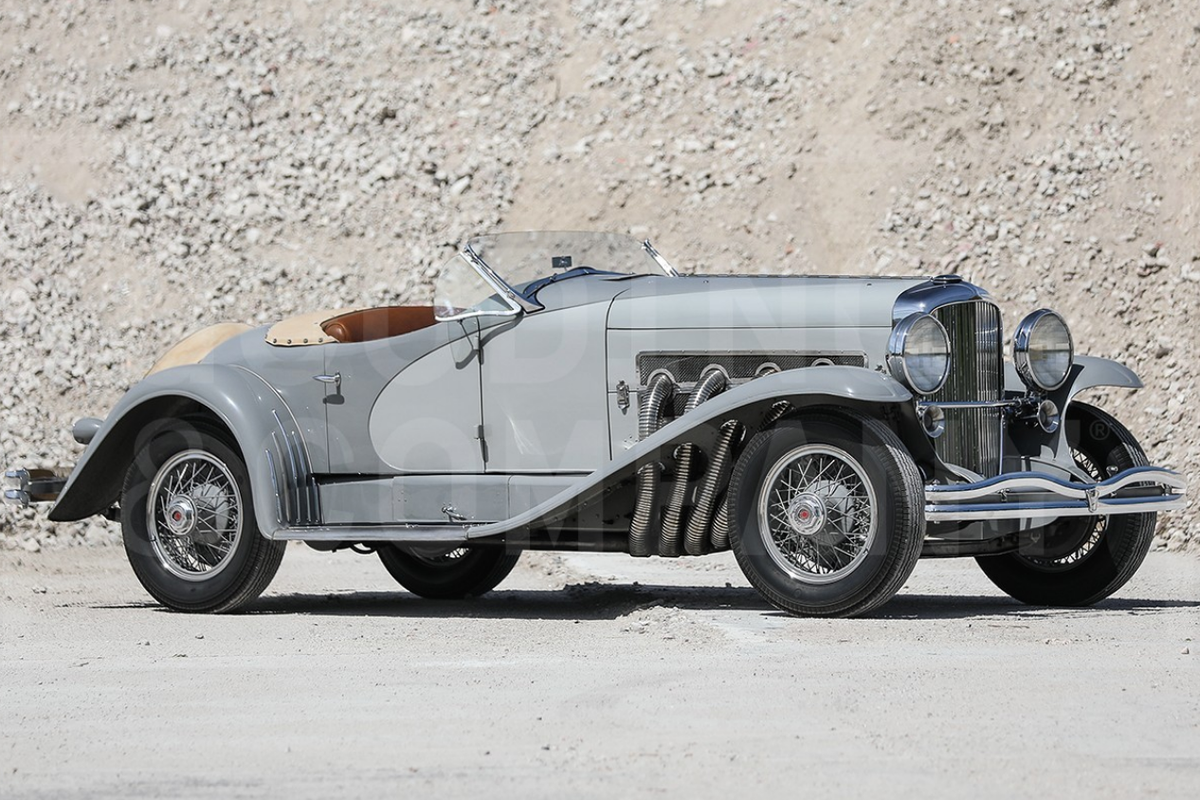 The example presented here is one of only two Duesenberg SSJ models ever built, and was constructed on a specially shortened 125-inch wheelbase. The two cars were immediately destined for Hollywood’s biggest superstars of the day – this SSJ, chassis J-563, went to Gary Cooper and the other SSJ, chassis J-567, went to Clark Gable. Gary Cooper had a lifelong love of cars – particularly fast ones. The SSJ is not a car for the faint of heart, as a 400-hp supercharged twin-cam inline 8-cylinder engine lies beneath its impressive hood. With an ultra-rare twin-carburetor intake, this car produced 80 hp more than the standard Duesenberg SJ, which was already the most powerful and one of the fastest production cars of its day. The SSJ Speedsters sported a gorgeous lightweight open-roadster bob-tail body produced by LaGrande (Central Manufacturing Company), an Auburn subsidiary in Connersville, Indiana. Quite simply, it is widely regarded as the ultimate Duesenberg.

The SSJ is a 1930s Hollywood star’s dream car, a glamorous icon, symbolic of the Golden Age of Hollywood. Imagine this gorgeous Duesenberg SSJ, tearing down Sunset Boulevard with legendary actor Gary Cooper at the wheel.

The SSJ comes to sale from the Miles Collier Collections. “The Collier family is one of the great leaders and innovators in the history of automobiles. Miles Collier has made it his life’s work to educate and promote the understanding of the role of cars in our lives. He has also curated an extraordinary collection of classic and groundbreaking cars. The Miles Collier Collections are unmatched and that is why it is such a remarkable event that he would present one of his most admired classic cars for auction,” says Gooding.

Collier comments: “Many vehicles are billed as ‘speedsters’ or ‘racers,’ but the Duesenberg SSJ really was. Peaking at 140mph in 1935, it was simply an unbeatable performer, matched by unbeatable style.”

Following Gary Cooper’s ownership, the SSJ then passed through a string of fascinating California owners, from a 20-year-old millionaire in Los Angeles to an industrial designer in San Francisco. In 1949, the SSJ was acquired by pioneering collector D. Cameron Peck of Evanston, Illinois. Peck, sold the SSJ Duesenberg to fellow collector and famed sportsman Briggs Swift Cunningham, who immediately jumped at the opportunity to acquire this car. The SSJ was a centerpiece in Briggs Cunningham’s famed museum in Costa Mesa, CA for many years.

On December 31, 1986, Miles Collier acquired the collection of Briggs Cunningham, a close family friend of the Collier family since the 1930s. Mr. Collier has since added to the collection and is known for having one of the world’s finest automobile museums due to his unwavering commitment to the importance of the automobile. Although he possesses some of the most significant automobiles in existence, the SSJ remains one of Mr. Collier’s prized possessions, such that Collier prominently displayed the car at the Revs Institute in Naples, Florida for 32 years.

“Believe me, it is not easy to part with this wonderful car. It symbolizes so much in our history, and has so much glamour and speed. But my mission is bigger than just one car. In today’s world, the automobile’s continued ability to be meaningful is under threat. Will the personal car be part of people’s lives in the future? Will people understand and remember that the automobile is the most important invention of our age? That it shaped the world as we know it? I want to ensure the legacy of skills, appreciation and care for the importance of motorcars is not lost.”

Since 1949, J-567 has been in the hands of just two caretakers: Briggs Swift Cunningham and Miles Collier, among the greatest names in car collecting. This timeless automotive treasure, with its mythical story and exceptional provenance, will always remain in the pantheon of the greatest collector cars.

The sale of this car out of the Miles Collier Collections is a significant move, a sign that he is elevating his mission to focus, steadfastly, on leaving a legacy of knowledge that anchors the automobile as the most important technological artifact of our age. Proceeds from the sale will be used to support Collier’s mission to create a substantial and self-sustaining automotive knowledge legacy for future generations.

To be auction by Gooding & Company