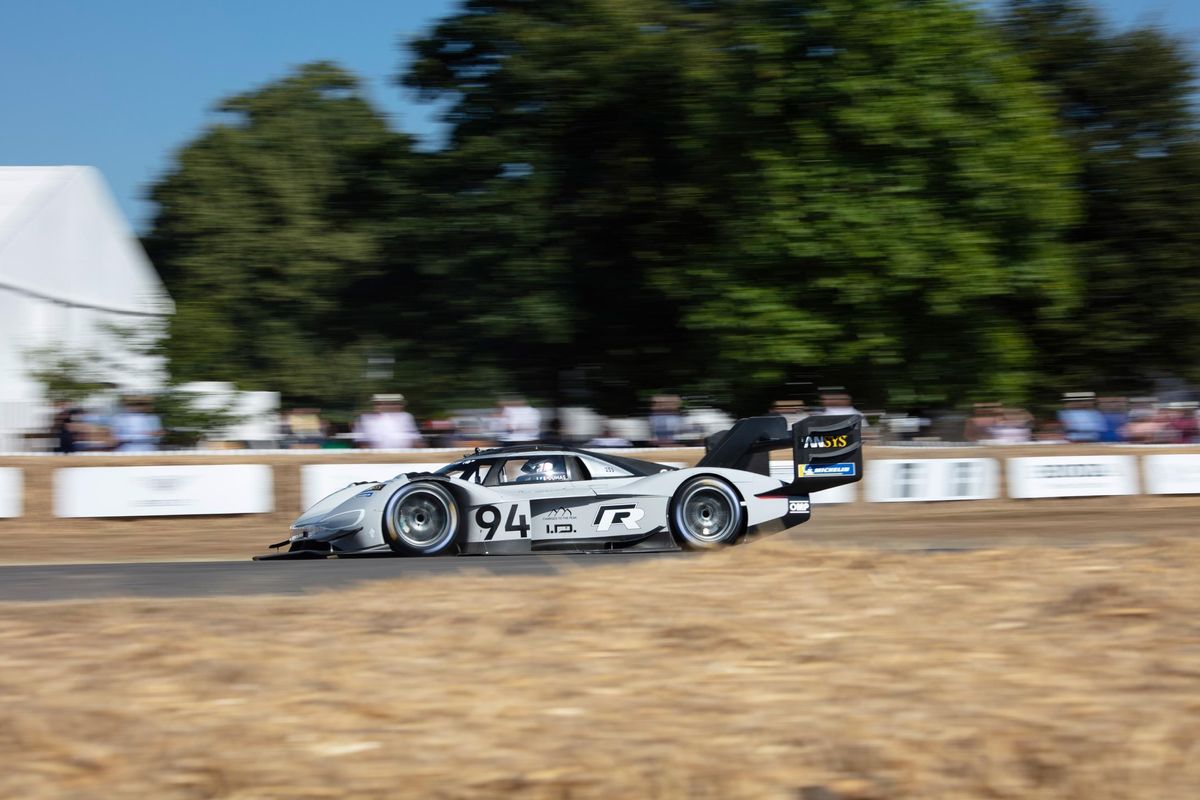 Romain Dumas breaks electric record at Festival of Speed
More than 200,000 spectators cheer on the sporty ambassador for the I.D. family

The I.D. R Pikes Peak has wrapped up its next record. Romain Dumas (F) set a new record for electric cars of 43.86 seconds in Volkswagen’s first fully-electric racing car at the Goodwood Festival of Speed. Following his record-breaking exploits at the legendary Pikes Peak International Hill Climb just three weeks ago, Dumas beat the previous fastest time for electric cars on the Goodwood Hillclimb, which has stood since 2013, by 3.48 seconds. The all-time record still belongs to Nick Heidfeld (D). The former Formula 1 driver completed the 1.86-kilometre route in 41.6 seconds at the wheel of a McLaren-Mercedes MP4/13 Formula 1 car in 1999.

“The I.D. R Pikes Peak has once again proven emphatically that it is a fantastic ambassador for our fully-electric I.D. family,” said Dr. Herbert Diess, the Chairman of the Board of Management of Volkswagen AG and Chairman of the Board of Management of the Volkswagen Passenger Cars brand. “I would like to thank the whole team. After the great success on Pikes Peak, at Goodwood we have shown once again how impressive the performance of an electric racing car can be. That is a very good preparation for our great electric car offensive which is starting next year.”

Volkswagen driver Romain Dumas was delighted: “Goodwood is an absolutely fantastic event and I am more than happy that we won in front of such a great crowd of motorsport enthusiasts,” said the 40-year-old after his latest record-breaking drive. “The hill climb track is short but often dirty and therefore you should definitely not underestimate it. In any case it is a great honour to drive here at Goodwood. You meet so many fantastic drivers, and the cars and motorcycles here span a century of motorsport. It is one of a kind.” Volkswagen Motorsport Director Sven Smeets was also a happy man: “Although the route is not even two kilometres long, we once again showed what the I.D. R Pikes Peak is capable of. Volkswagen is committed to electromobility and we want to take every opportunity to show how emotional this topic can be, before Volkswagen launches its first fully-electric range as of 2020.”

More than 200,000 people visited the Goodwood Festival of Speed from 12 to 15 July, as the event in the south of England celebrated its 25th anniversary. The homage to motorsport on the Duke of Richmond’s estate is the largest event of its type in the world. This year’s starter list once was once again a who’s who of motorsport. Dumas in the 500-kW (680-PS) I.D. R Pikes Peak was joined at Goodwood by Hans-Joachim “Strietzel” Stuck (D) and Jochi Kleint (D) in the 480-kW (652-PS) 1987 Volkswagen Golf MkII Bi-Motor Pikes Peak. Other big names in action included Giacomo Agostini (I), Derek Bell (GB), Emerson Fittipaldi (BR), Mika Häkkinen (FIN), Tom Kristensen (DK), Nick Mason (GB), Sébastien Ogier (F), Richard Petty (USA), Walter Röhrl (D) Sir Jackie Stewart (GB) and Billy Monger (GB)