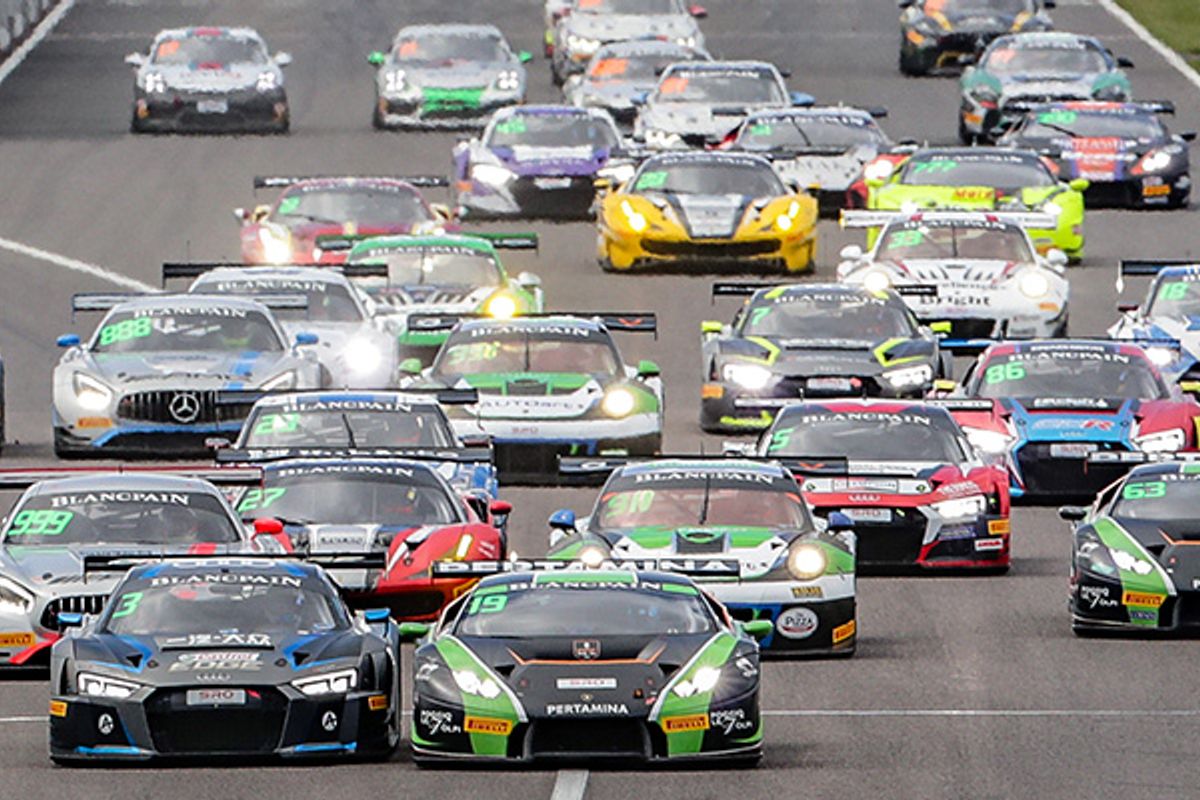 The 2018 Blancpain GT Series Asia campaign enters its second half this weekend at Fuji Speedway where another season-high entry comprising 33 supercars will assemble for rounds seven and eight (July 21/22).

The championship’s second Japanese outing in the space of three weeks, following its trip to Suzuka and – before that – Buriram and Sepang, sees the leaders of both classes eager to increase their already impressive points advantages during two 60-minute races around the 16-turn, 4.563-kilometre layout overlooked by Mount Fuji.

GT3: A CHANCE FOR CHAMPIONSHIP OUTSIDERS?

Five different winning crews in the first six races has certainly kept the GT3 class interesting. However, only one pairing has been both fast and consistent: FFF Racing’s Dennis Lind and Martin Kodric.

The GT3 championship leaders are also the senior class’ form pairing after claiming a maiden victory and additional podium – their fourth of the year – at Suzuka, which sees the Lamborghini duo enjoy a 19-point advantage over the only man to have won twice this term, Patric Niederhauser.

However, Lind and Kodric’s ‘reward’ for winning Race 2 now sees them carry a 15s pitstop success penalty into Saturday’s round, while Niederhauser and his GruppeM Racing Mercedes-AMG co-driver Nico Bastian – who returns for the first time since Sepang – will serve a five-second handicap of their own for previously finishing third.

That leaves the door ajar for rivals representing Audi, Ferrari, Porsche and Nissan to strike.

Absolute Racing’s Franky Cheng and Martin Rump opened Ingolstadt’s 2018 account by winning Suzuka’s first race and currently occupy third in the standings despite being punted out of Race 2. They’re six points clear of Nick Foster, who snatched Suzuka pole thanks to an incredible late effort aboard the same HubAuto Corsa Ferrari he shares this weekend with fellow Antipodean and Blancpain GT Series Asia debutant, Jono Lester. GruppeM’s Raffaele Marciello and Markus Pommer complete the overall top-six after taking one victory apiece so far in 2018.

Malaysia and Thailand both proved tough for Porsche, but Craft-Bamboo was back on form at Suzuka where Shae Davies and Sandy Stuvik finished second and fifth. The same 991 GT3 R model also claimed a pole at Fuji 12 months ago in the hands of Foster, raising the possibility of another strong showing this weekend.

Fuji might be owned by Toyota but it’s also been a home of sorts to Nissan, which stages its NISMO Festival there each year. And there’s a good chance KCMG’s GT-Rs will be at the sharp end again this weekend after Edoardo Liberati and Florian Strauss scored their second podium in three races at Suzuka.

FFF Racing’s other Lamborghini driven by Hiroshi Hamaguchi and Marco Mapelli also leads the Pro/Am standings, although KCMG’s Nissan of Yuke Taniguchi is only seven points behind. A Japanese driver – well, two in actual fact – also heads the Am Cup table where Takuya Shirasaka and Naoto Takeda enjoy a significant advantage over Andrew Macpherson and Ben Porter.

GruppeM Racing’s Reinhold Renger maintained his stellar start to the season at Suzuka but was pushed all the way by Japanese squad BMW Team Studie whose rivalry with another Mercedes-AMG squad – Team iRace.Win – looks set to continue this weekend.

Renger’s 39-point lead at the top of the standings owes as much to a lack of consistency amongst his rivals as it does out and out pace, for no single pairing has been able to mount a sustained challenge against the German.

Ringo Chong and Gilles Vannelet might be Renger’s closest championship rivals but it’s Team Studie’s #81 M4 GT4 which looks most likely to topple GruppeM this weekend after Takayuki Kinoshita and Sunako Jukuchou finally combined speed and luck to win their first Blancpain GT Series Asia race at Suzuka. What’s more, the latter’s pole position suggested the BMW is a match for the Mercedes-AMG over one lap as well as a stint, which will again prove vital this weekend.

However, the Craft-Bamboo Racing Mercedes-AMG is missing from the entry list due to Frank Yu’s lung infection, which has prevented the reigning GT4 champion from travelling to Fuji.

Two practice sessions take place this Friday ahead of qualifying and the weekend’s first hour-long race on Saturday. Watch both of those and Sunday’s race live on the championship’s Facebook page and website, as well as SRO’s GT World Youtube channel.