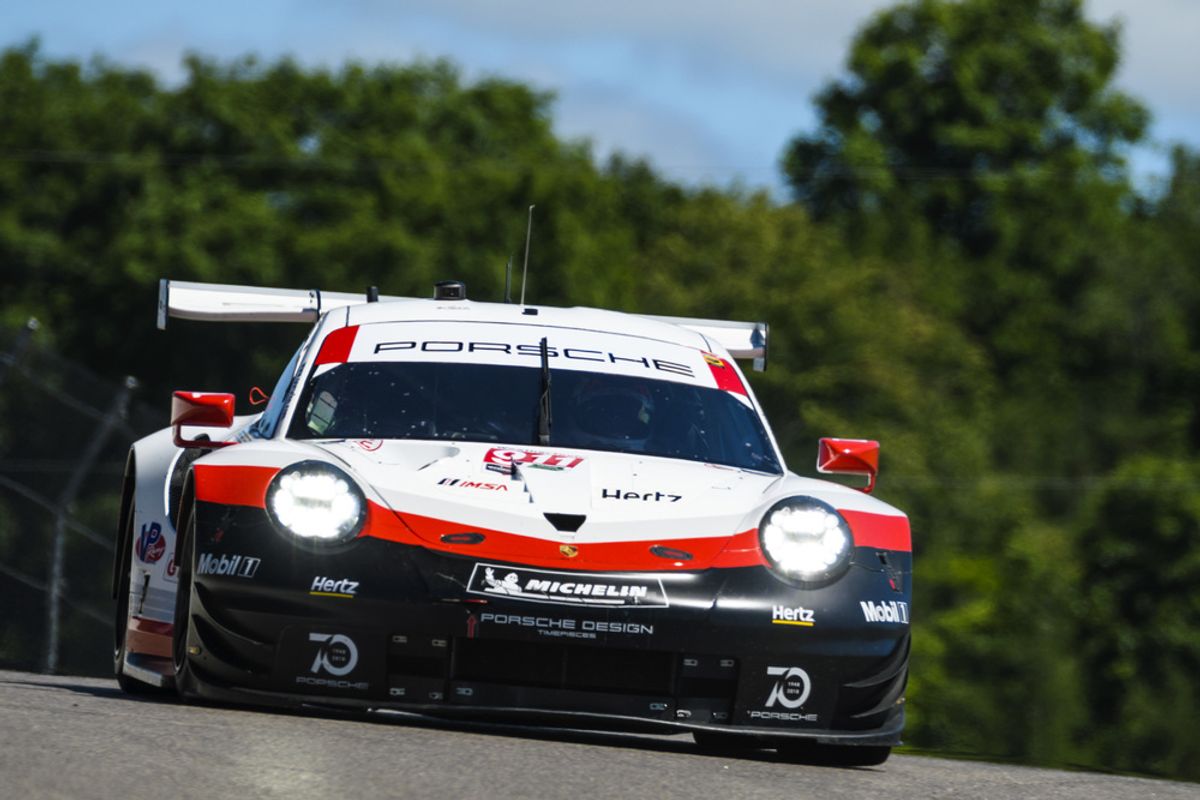 The Porsche GT Team tackles round seven of the IMSA SportsCar Championship at Lime Rock Park on 21 July with two 911 RSR. The Porsche customer team Wright Motorsports fields two 911 GT3 R racers. The race in the idyllic rural region of the US state of Connecticut, at which Porsche celebrated the historic maiden victory with the new 911 RSR last year, offers two unique features: at a length of just 2.414 kilometres, the course is the shortest on the championship calendar. Given that only the GTLM and GTD classes compete at Lime Rock, overall victory will definitely go to a GT car. With 18 victories, Porsche is the most successful manufacturer in the history of this race.

The race
Fans can look forward to a very special motorsport experience out in the countryside: Because there are no grandstands along the circuit, they can follow the action from the grassy hills surrounding the racetrack, equipped with camping chairs and cool boxes. In 2017, spectators were treated to a Porsche festival, with the 911 scoring victory in both the GTLM and the GTD classes. The narrow racetrack features six right-hand corners and just one left-hander.

The Porsche drivers
The cockpit of the #911 Porsche 911 RSR is shared by Patrick Pilet (France) and Nick Tandy (Great Britain). This season, the pair won the 12 Hours of Sebring. The Mid-Ohio winners Laurens Vanthoor (Belgium) and Earl Bamber (New Zealand) share driving duties in the second 911 RSR (#912) fielded by the Porsche GT Team in the GTLM class. In the GTD class, the Porsche customer team Wright Motorsports competes with two 911 GT3 R. Sharing driving duties in the #58 car are the works driver Patrick Long (USA) and Porsche Selected Driver Christina Nielsen (Denmark), with the #16 vehicle manned by Wolf Henzler (Germany) and Michael Schein (USA).

The Porsche vehicles
For the second race season, the 911 RSR was optimised primarily in the setup. Depending on the size of the restrictor, the motor, which is positioned in front of the rear axle, puts out around 375 kW (510 hp). The particularly large rear diffuser combined with a top-mounted rear wing provide strong downforce and aerodynamic efficiency. The ca. 368kW (500 hp) 911 GT3 R was designed for worldwide GT3 series on the basis of the 911 GT3 RS production sports car. For 2018, Porsche provides its customer teams with an evo-kit.

Comments before the race
Dr Frank-Steffen Walliser, Vice President Motorsport and GT Cars: “We celebrated our maiden win with the new 911 RSR at Lime Rock last year. We’re keen to repeat this success. After the strong performances at Watkins Glen and Bowmanville, we’re now heading to Lime Rock fully prepared and feeling very optimistic. We’ll do our utmost to secure a top result and further improve our promising position in the fight for the championship.”

Pascal Zurlinden, Director GT Factory Motorsport: “Overtaking is difficult at Lime Rock, hence it’s important to start from as far up the grid as possible. A good qualifying result is half the battle on this narrow circuit – as we saw last year with our win.”

Sebastian Golz, Project Manager GT Customer Sport: “It’s important on such a short and twisty track to carefully maintain the grip level of the tyre. If you’re too tough on them there is no time to recover – and then things get difficult.”

Patrick Pilet (911 RSR #911): “I’m expecting a gripping race at Lime Rock. The course is narrow and twisty and it sometimes reminds me of a go-kart track. The cars are often bunched close together, which makes it interesting for the fans. We did very well last year with our 911 RSR and I have no reason to think we can’t do it again this year.”

Nick Tandy (911 RSR #911): “Lime Rock is great turf for Porsche. We’ve always performed very well on this racetrack. We look forward to this unique race all year. Because the track is so short the traffic is always heavy. Our team has to implement the right race strategy so that we get as many free runs as possible.”

Laurens Vanthoor (911 RSR #912): “Our double victory last year underlined that the racetrack suits us. However, Lime Rock is no easy race. The laps are very short and you have to be extremely careful to manoeuvre through the heavy traffic unscathed. Lime Rock marks the start of the critical phase of the championship. That makes it all the more important to earn decent points.”

Earl Bamber (911 RSR #912): “Lime Rock is a great track for Porsche. We have always performed well there in recent years. The entire team is excited to tackle this race. The fact that we claimed overall victory with the 911 RSR at Lime Rock last year gives us additional motivation.”

Patrick Long (911 GT3 R #58): “Lime Rock is constant cornering, there’s very little chance to relax. The racetrack offers everything that makes racing fun – it has very fast corners and some slow bends, where we can use the good traction of our 911 GT3 R.”