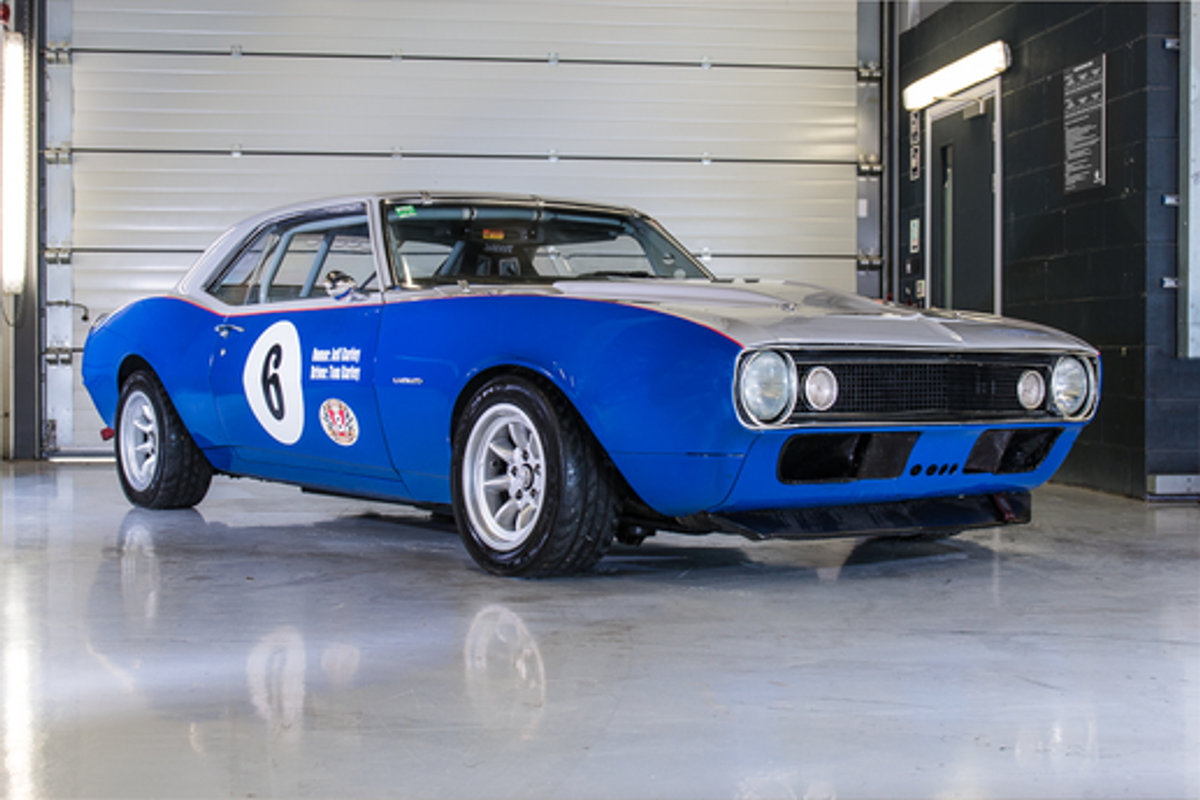 In superb overall condition and properly prepared
The 5.6-litre V8 engine has recently been rebuilt by fellow racer Simon Lane
Comprehensive history dating back to 1992 and its own pictorial storybook
Eligible for CSCC Future Classics, AMOC Intermarque and many other events

As the 1960s roared on, so too did the introduction of a new generation of powerful, big block V8    saloon cars in the United States that came to be known as 'Muscle Cars'. Ford claimed 'bragging rights' with its dramatic new Mustang, destined to become one of the all-time greats, whilst other 'Motor City' favourites included the Dodge Charger, Pontiac GTO, Plymouth Barracuda and the Chevrolet Camaro.

Introduced in 1966, the Camaro was offered in 2-door form with both coupé and convertible body styles to choose from, as well as a range of different engine sizes, and trim and styling packages. Top of the pile at Chevrolet was the macho Z28 powered by a rumbling 302cu.in. 5-litre small-block V8 and this was their chosen contender for the battles that lay ahead...

Whilst salesman in car dealerships across the States fought it out for units sold, Chevrolet decided that it wanted to take the fight to Ford on the race tracks of America and prepared cars that complied with the 'Group 2' regulations drafted for the Sports Car Club of America Trans-American Series allowing cars with up to 5.7 litre engines to compete. Famous Camaro drivers included Mark Donohue, ex-F1 pilot Ronny Bucknum and Jerry Thompson. It was Donohue though, who took the spoils in the 1968 and '69 seasons driving a Penske-prepared Camaro with utter domination in the Trans-Am series. It wasn't long before European teams and drivers spotted the successes of their American counterparts and these cars soon appeared at race circuits across Europe.

The story with this particular car started in 1992 when our vendor bought a 1967 road legal Chevrolet Camaro with the intention of building it into a race car and running in the HSCC Improved Road Sports Championship. The car later ran in the Historic American Racers Association series run by paddock favourite Bernie Chodosh, where our vendor was often at the sharp end of the grid. For many years the car was enjoyed and raced before our vendor sold it and it was campaigned by other owners. Fast forward a number of years and our vendor re-discovered the car languishing in a unit and decided to buy his old car back. A full rebuild of the car ensued, this time with the help of the vendor's son, who was now of the age to drive and who went on to pilot this car to many successes.

Sporting a 5.6-litre V8 engine, which has recently been rebuilt by fellow racer Simon Lane, the car runs a 4-speed manual gearbox. An ATL aluminium fuel tank resides in the boot, and we suggest all potential buyers of the car satisfy themselves as to the legality and currency of all safety equipment on board including seats, harnesses and fire extinguisher.

Supplied with a hardback book put together by our vendor showing a pictorial history of the car along with a decent file, this American Muscle-car has clearly been welcomed back into the family with lots of attention and provided years happy racing memories. A potential candidate for gaining FIA papers, this car will get you on to the grid in the AMOC Intermarque series, Bernies V8s and CSCC Future Classic.