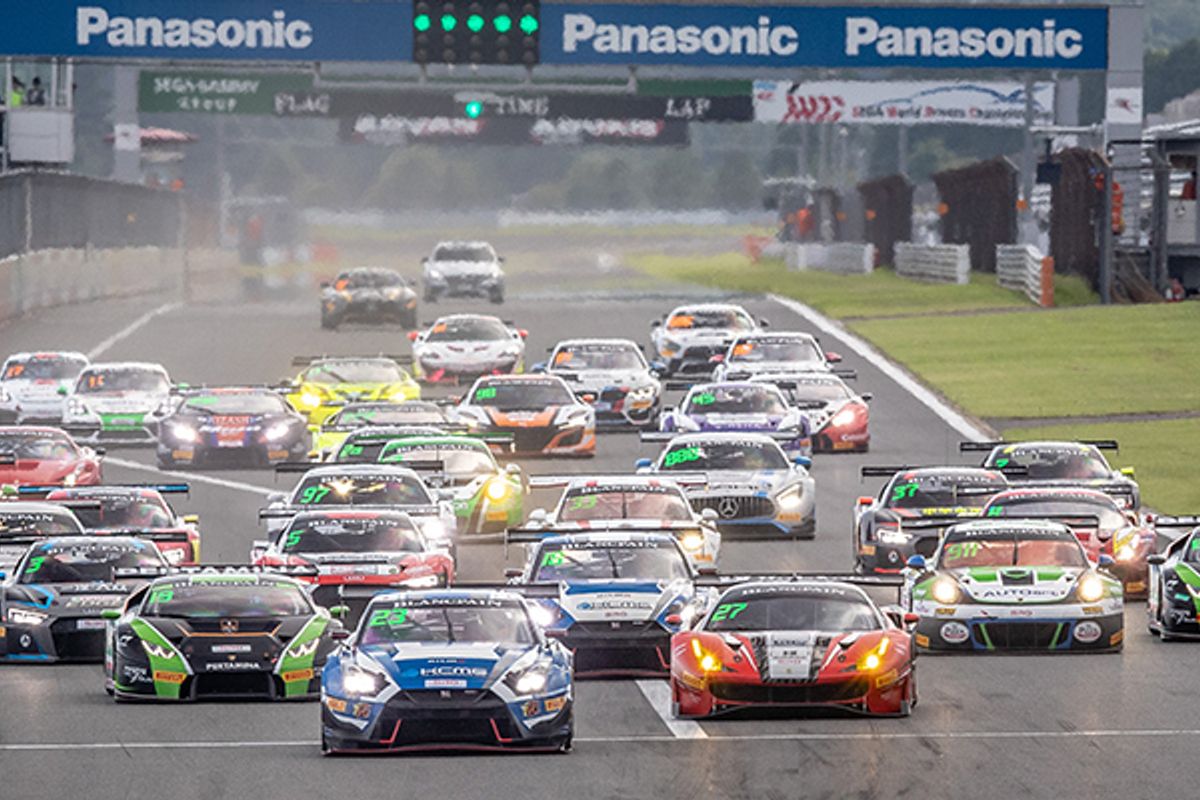 Yuke Taniguchi and Alex Imperatori gave Nissan and KCMG their maiden Blancpain GT Series Asia victories at Fuji this afternoon after fighting through from sixth on the grid. Nick Foster and Jono Lester’s HubAuto Corsa Ferrari was second after getting the better of pole-sitters Edoardo Liberati and Florian Strauss, who completed the podium aboard KCMG’s second GT-R NISMO GT3 despite serving a success penalty.

Nissan backed up its maiden pole position earlier in the day by claiming a first series victory, albeit with the #18 GT-R NISMO GT3 that started sixth.

The opening stint suggested Edoardo Liberati would make good on his qualifying performance. But after initially establishing a 1.3s advantage, the Italian was reeled in and passed by Dennis Lind’s FFF Racing Team Lamborghini, which had moved from third to second amongst the first corner shuffle on lap one.

That put the two cars with the biggest pitstop success penalties – 15s and 10s, respectively – out front. And with their advantages over the chasing pack roughly the same, much would depend on the driver changes, which began after 25 minutes.

Liberati stopped a lap earlier than Lind and handed over to Florian Strauss who emerged in what would become first. Meanwhile, FFF Racing’s slightly later stop wasn’t enough to negate their 15s success penalty, which saw Martin Kodric initially slot into second before dropping to fourth on his out lap.

However, all eyes were soon on the lead battle between KCMG’s two Nissans, the second of which – now driven by Alex Imperatori – enjoyed a standout opening stint in the hands of Taniguchi. The Japanese amateur initially took advantage of contact that sent Sandy Stuvik’s Porsche into the Turn 2 barriers on lap one, but looked totally at home running third overall for most of the first 25 minutes. That was until traffic allowed Nico Bastian, Jono Lester and Martin Rump to pounce in quick succession just before the pit window opened.

Nevertheless, Taniguchi’s excellent work allied to an early pitstop and no success penalty ensured Imperatori was in the mix once the pit window closed. And the former Super GT driver wasted no time taking his chance by passing Strauss at his first opportunity and setting fastest lap of the race in the process.

While the #18 Nissan sprinted clear, Strauss was soon contending with Nick Foster who’d already dispatched Kodric after taking over from Lester. The pair ran side-by-side for several corners and even made light contact at one point before the Ferrari completed its decisive move.

Behind, Patric Niederhauser – whose GruppeM Mercedes-AMG he shares with Bastian also served a five-second success penalty – snatched fourth from Kodric on the penultimate lap to reduce his championship deficit.

Porsche Team EBI’s Yamano brothers, Naoya and Tetsuya, were best of the race-by-race entries in ninth as well as one place ahead of OD Racing Team WRT’s Aditya Patel and Mitch Gilbert.

Japanese success continued in the Am Cup class thanks to KCMG’s Naoto Takeda and Takuya Shirasaka whose Audi beat AMAC Motorsport’s Lamborghini driven by William Ben Porter and Andrew Macpherson.

Fastest in all three practice sessions, pole positions for both races, and now a second win of the season: Sunako Jukuchou and Takayuki Kinoshita’s dominance continued in Fuji’s opening race today where their BMW Team Studie M4 claimed a comfortable GT4 class victory.

Problems for their main rivals undoubtedly helped, but there was no denying the pair were worthy winners after leading from start to finish. The team’s only downside came in the form of its second entry, which was running second when it served a penalty for jumping the start.

That opened the door for Ringo Chong and Gilles Vannelet to charge through from last to second after their Mercedes-AMG failed its post-qualifying ride height test. Chong’s ability to preserve the car’s tyres over the opening stint offered his French co-driver an opportunity to mount a fantastic recovery that culminated in passing Brian Lee and Tony Fong’s TTR Team SARD Porsche in the closing stages.

The team’s Cayman still finished third – its best result of the season – ahead of Keo Chang and George Chou, as well as Studie’s penalised BMW shared by Ken Urata and Max Chen, while an early puncture limited championship leader Reinhold Renger to sixth.

The weekend’s second 60-minute race begins at 13:05 tomorrow. Watch it live on the championship’s Facebook page and website.

DRIVER QUOTES
Yuke Taniguchi, #18 KCMG Nissan GT-R NISMO GT3: “I passed three pros at the start but thought they would be right behind me pretty soon so just focused on my own pace and race. But I felt pretty comfortable staying ahead of them for most of the stint and I really enjoyed it! I’ve done a lot of laps around Fuji and was here very recently for an endurance race so know the circuit well. I guess that helped today!”

Takayuki Kinoshita, #81 BMW Team Studie BMW M4 GT4: “Thanks to the efforts of my team-mate we were able qualify at the front. And as Jukuchou also started the race very quickly, well, I would have to say everything fell into place perfectly. We’ve done very well all weekend so far in practice and qualifying, and of course now in the race as well. Today was brilliant, and so now we need to concentrate on tomorrow.”