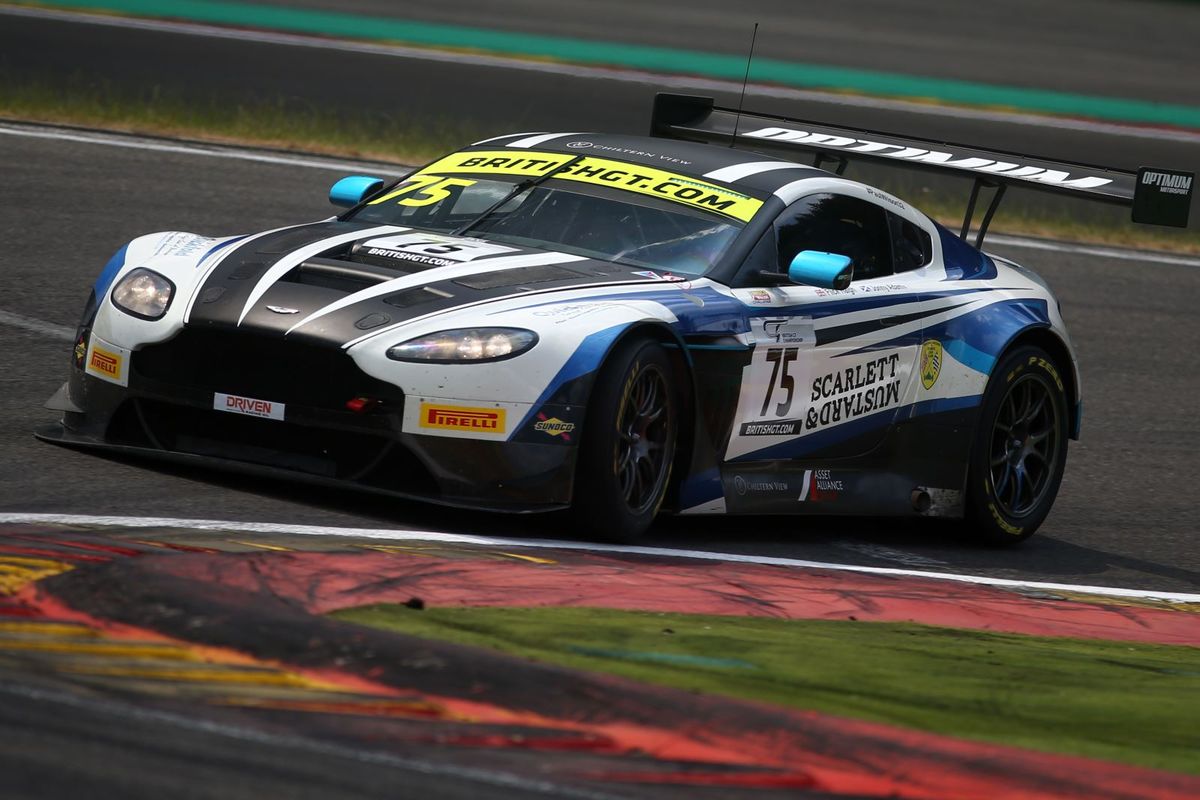 Haigh and Adam will be joined on the front row by the Jetstream Motorsport Aston Martin of Graham Davidson and Maxime Martin, while Team Parker Racing’s #7 Bentley lines up third thanks to Ian Loggie and Callum Macleod who set qualifying’s fastest individual time.

In GT4, Tolman Motorsport’s Fagg and O’Brien will have McLaren company alongside them in the form of Equipe Verschuur’s Finlay Hutchison and Daniel McKay, as well as Tolman’s second 570S driven by Lewis Proctor and Jordan Albert who start third.

Having started the day by topping the timing screens in Free Practice 1, the #75 Optimum Motorsport Aston Martin of Flick Haigh and Jonny Adam was always going to be a force to be reckoned with in qualifying.

The duo duly delivered on their early promise by claiming their second pole position of the season and first since the opening race of the year at Oulton Park.

Haigh set the early pace in the Am session, leading the way from the #47 Aston of Graham Davidson and Jordan Witt’s #24 RJN Motorsport Nissan.

Shaun Balfe moved up to fourth in Balfe Motorsport’s McLaren before reigning champion Rick Parfitt Jnr upped the ante aboard Team Parker Racing’s #1 Bentley. His 2m22.105s was enough to top the session ahead of Haigh, Davidson, Witt and Balfe, with the top-six completed by debutant Remon Vos in the #30 RAM Racing Mercedes-AMG.

When the GT3 Pro session got underway it was no surprise to see Adam put the #75 Aston Martin back on top of the timesheets with a 2m19.281s. That was enough for a combined advantage of 0.175s over the #47 Aston Martin, now piloted by Maxime Martin, while Callum Macleod’s session-leading 2m18.735s helped Team Parker Racing’s #7 Bentley vault up to third.

The #11 TF Sport Aston Martin of Mark Farmer and Nicki Thiim claimed fourth ahead of the RAM Racing Mercedes-AMG shared by Vos and Tom Onslow-Cole. Rob Bell helped Balfe Motorsport’s McLaren take, with Parfitt Jnr and Ryan Ratcliffe having to eventually settle for seventh in the other Bentley.

After a strong showing in practice, Tolman Motorsport’s trio of McLarens all looked capable of challenging for GT4 pole. However, three quickly became two when David Pattison’s #56 570S hit the tyre barrier at Raidillon.

Fortunately, Pattison was able to climb clear of the car unaided, but the team now faces a race against time to be ready for tomorrow’s race.

Significant repairs were also required to the tyre wall and, once the action resumed, only six minutes remained on the clock, leading to some fast and furious action. The Century Motorsport duo of Ben Tuck and Dean Macdonald set the initial pace before the #4 McLaren of Michael O’Brien, one of two Tolman Motorsport machines left to battle it out, assumed top spot.

Charlie Fagg then wasted no time in confirming the #4’s position at the head of the GT4 field as the Pro session got underway, posting a 2m31.941s to put the McLaren 0.192s clear of the #10 car now piloted by Daniel McKay. Fagg’s Tolman stablemate Jordan Albert moved the #5 McLaren up to third with the #42 Century Motorsport BMW, now in the hands of Ben Green, assuming fourth place.

Mike Robinson, at the wheel of the #501 Balfe Motorsport McLaren, set the fastest time of any driver in the session and that was good enough to put him and Graham Johnson into fifth. Pointon and Patrik Matthiesen rounded out the top-six.

Starting seventh tomorrow will be Macdonald and Jack Mitchell in the second Century Motorsport BMW, ahead of Kelvin Fletcher and Martin Plowman in the UltraTek Racing Team RJN Nissan 370Z.

Tomorrow’s two-hour race at Spa-Francorchamps gets underway at 13:40. Follow all the action via live timing on British GT’s website.

DRIVER QUOTES
Flick Haigh, Optimum Motorsport #75 Aston Martin V12 Vantage GT3: “Pole feels amazing, especially as we’ve had some bad luck the past few rounds so it’s nice to be up where we were at Oulton Park. We’ve done a lot of set-up work and we were here a few weeks ago for a two-day test so I felt confident with the car and the circuit. I’m really happy it has all come together.”

Charlie Fagg, Tolman Motorsport #4 McLaren 570S GT4: “It’s really nice to get pole position, and also great to have extracted the maximum from the car after a slightly disappointing Silverstone. We needed to bounce back and that’s what we did so I’m really happy with that. Michael did a really good job too so we need to keep pushing on and we will see you all tomorrow for the race, which hopefully we can win.”

Jonathan Wells, Pirelli UK motorsport manager: “Spa is the most demanding circuit on the British GT calendar for the tyres, with its variety of different corners, fast straights and considerable undulation. In addition to the famous Eau Rouge, the long Pouhon corner provides sustained loading on the right-side tyres, while at Blanchimont the lateral forces are significant. The weather conditions can often influence races at Spa, but with extensive experience there, including our supply of the 24-hour race, we will be well-equipped.”