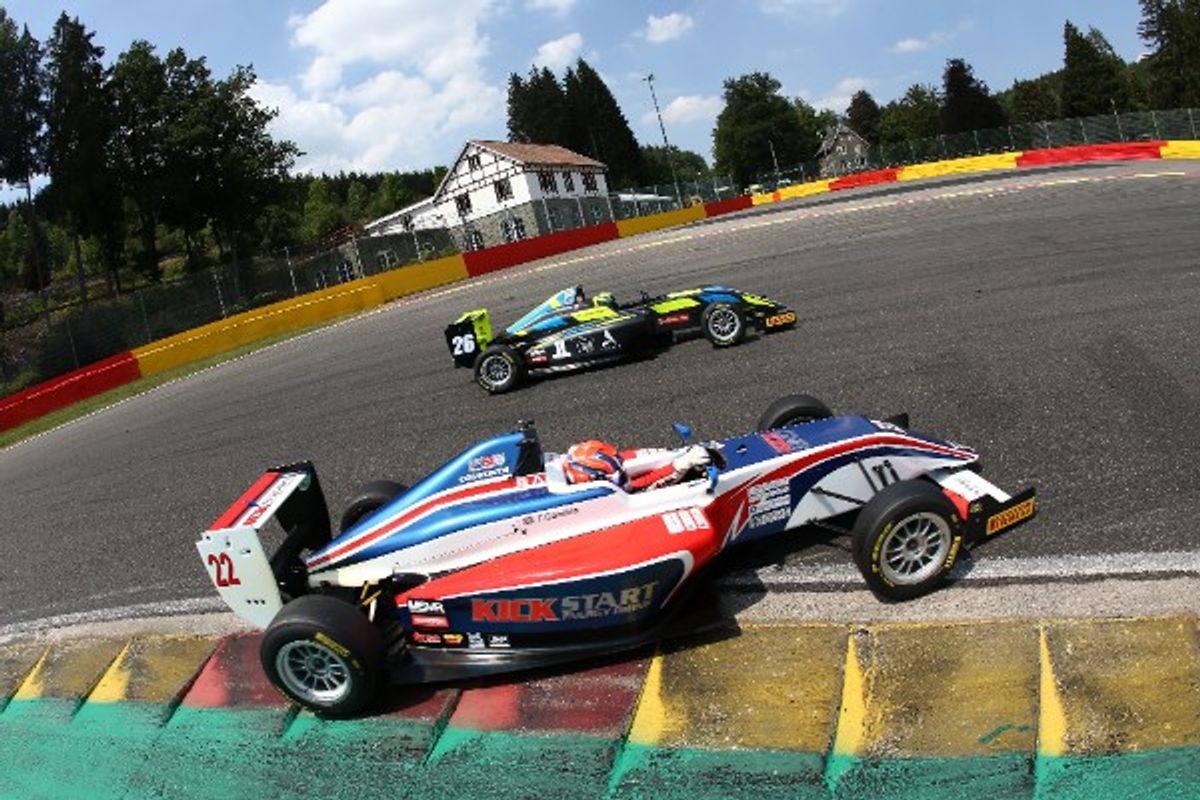 as title leader claims fifth win of the year

Double R Racing's BRDC British F3 Championship leader Linus Lundqvist secured his fifth win of the year in race one at Spa this afternoon (Saturday). He claimed victory by 0.495s from pole sitter Tom Gamble with Krishnaraaj Mahadik completing the podium in third.

Manuel Maldonado held third for most the race before Mahadik's late move, while Nicolai Kjaergaard climbed from 12th on the grid to take fifth. A late move from Billy Monger secured him sixth place ahead of Kush Maini, with Jusuf Owega, Sun Yue Yang and Sasakorn Chaimongkol completing the top-10.

At the start, it was Maldonado who made the best initial getaway to lead before quickly being passed by Gamble and then Lundqvist, who had slipped down to fourth in the opening exchanges. Gamble held a lead of just under four tenths crossing the line at the end of lap one, but Lundqvist found his way into the lead on lap two, though any initial chance to build a lead was wiped out when Douglas Motorsport's new recruit Max Defourny crashed heavily at the top of Raidillon, though thankfully he was able to walk away from the car unaided. Defourny had broken his wing towards the end of the previous lap and the resulting loss of downforce resulted in the accident.

The safety car was deployed straight away, with Lundqvist leading Gamble, and Maldonado holding third. The accident was cleared quickly and racing resumed on lap four, with Lundqvist building a lead of almost six tenths of a second in the first lap after the safety car. Gamble was showing flashes of pace though, and was able to trim the lead slightly on some laps, claiming the fastest lap of the race in the process, but wasn't quite able to force a move on Lundqvist, who stretched his lead at the top of the standings to 72 points over Kjaergaard.

Mahadik's third place, his second podium of the year, came after a fighting drive. The Indian started seventh but was fourth at the end of lap one, and passed Maldonado for third on lap six to secure his podium.

Kjaergaard's fifth place means he has lost more ground in the championship battle, though once again demonstrated his overtaking abilities by climbing from 12th on the grid to sixth on lap one and then passing Maini on lap two. He finished ahead of team mate Monger who was in the thick of the action - he started fifth but was relegated to seventh on the first lap. Starting lap seven he was just a tenth behind Maini and made a move stick to claim sixth, finishing over two and a half seconds clear of Maini who had to fend off Jusuf Owega in the closing stages

Owega was another driver to see plenty of action, starting from eighth he dropped to 12th on lap two, but then made amends by moving past Jamie Chadwick and a troubled Ayrton Simmons on lap four, passing Sun Yue Yang on lap six and finally taking Jamie Caroline on lap seven to claim eighth.

Yang also had an eventful race on his way to ninth, falling to 12th on lap one before fighting his way back and enjoying a decent battle with Owega, while Chaimongkol was as low as 15th in the race but fought back to complete the top-10 ahead of best placed debutant Jamie Caroline, who enjoyed spells in the top-10 before being passed by Chaimongkol on the penultimate lap.

Fellow newcomer Ayrton Simmons started fourth and ran inside the top-10 in the early stages, but suffered damage on the restart lap while attempting to pass Caroline and was forced to pit for repairs.

The second BRDC British F3 race of the weekend starts at 11.50 local time tomorrow, with live timing and updates available on the official series website.

Driver quotes:
Linus Lundqvist: "We're just over half way through the season so a lot of things can happen but I'm just focussed on trying to get the best results possible. Today we could fight for the win and was able to get it. The car has been mega throughout and now to get the win and give this one back to the Double R boys who have been working very hard for this feels very good.

"Maldonado was actually leading out of turn one and Krishnaraaj was ahead of me going into Eau Rouge but then I got a run on him through the middle of Eau Rouge and was then able to get past Maldonado at Les Combes. Then the lap after I was able to get the tow on Gamble down the Kemmel straight and took the lead and was able to build a bit of a gap in sector two. I was very happy with it because I gave it my all and then the safety car came out and I was like 'oh man!' But I got a decent restart and then it was like that with every lap as he was getting the tow through sectors one and three and I tried to pull a bit of a gap in sector two where he was lacking a bit of downforce that I had, and I'm very happy with the win."

Tom Gamble: "We would have liked the win there but you have to take what comes. In terms of the championship I've taken points away from the two guys ahead of me. I did the best I could, I got into the lead at one point but the tow around here is so huge and maybe if the safety car hadn't come out I would have had a few more opportunities.

"We will have to work harder for it tomorrow and get that win. We got the fastest lap so if no one beats that we'll be on pole for race three, so hopefully no one will beat that tomorrow. The car was fantastic but I didn't quite have enough to get past Linus."

Krishnaraaj Mahadik: "The race was very good especially after how close qualifying was yesterday, it was intense! It was very surprising how close it was considering the length of the circuit, and I'm happy with my result today after starting from seventh.

"It's very hard to follow through the second sector of the lap because there are so many corners and the aero balance is affected a lot if there is a car in front of you, but I kept it clinical and I passed Maldonado with a big slipstream down the straight following Eau Rouge to get the podium."

Photo: Gamble and Lundqvist were close throughout the race: image, Jakob Ebrey