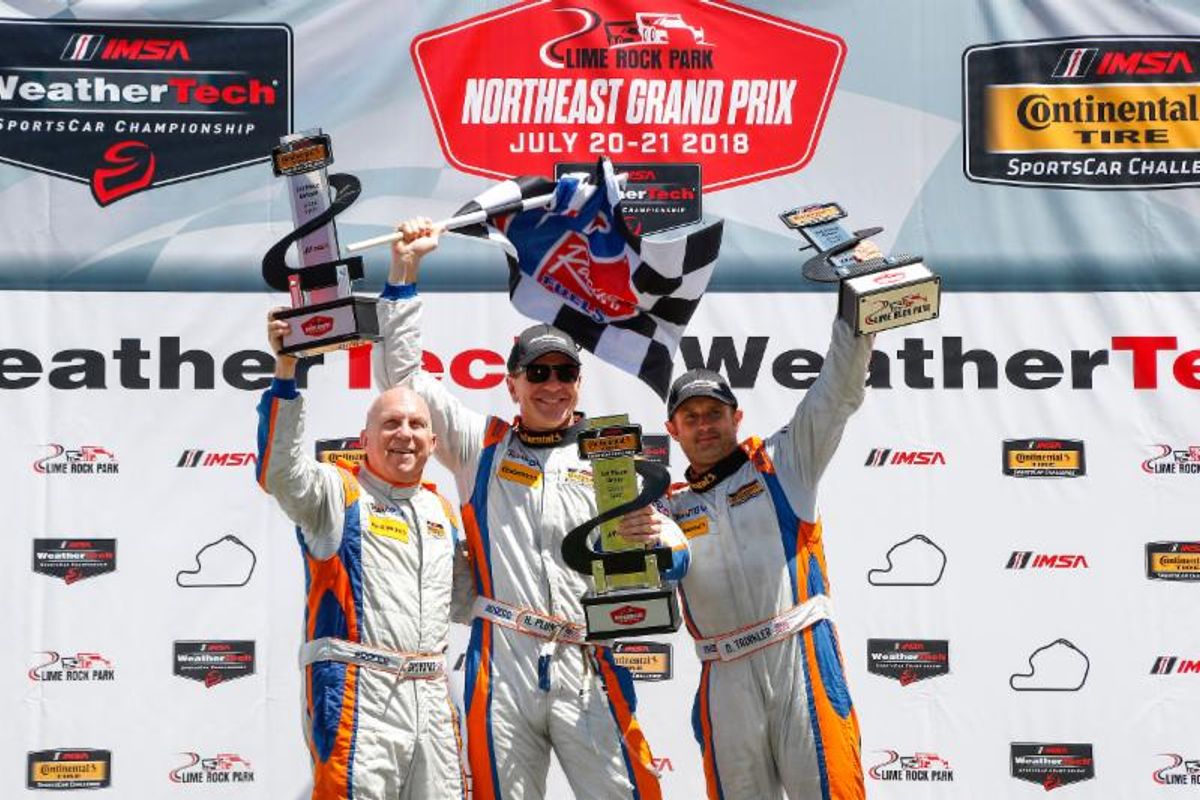 Starting second on the grid in the Grand Sport (GS) class, Trinkler held his position behind the leading No. 28 RS1 Porsche Cayman GT4 MR for the duration of his stint before handing the car over to Plumb during the mid-race pit stop. It was that pit stop under a full-course caution that proved to be the defining moment of the race, as the No. 46 team got its Mercedes-AMG back out on track before the No. 28.

“It’s unbelievable,” said Trinkler. “I can’t thank (Team Owner) Ted Giovanis so much and everyone at TGM for giving me this opportunity in the (No.) 46 Mercedes-AMG. To get the first win for this car in North America is just unbelievable.

“The boys had a great setup and great pit stop. We rolled off the truck yesterday and felt really confident about what we could do. Qualified P2 and ran there most of my stint, but I was just kind of riding a little bit because I knew we got the best boys in the pits and knew we could leap frog by the (No.) 28 car.”

While it was a breakthrough victory for both Team TGM and Mercedes-AMG, Saturday’s results have been a long-time coming for both entities.

Formed in 1991 by Giovanis, Team TGM made its professional road racing debut 15 years later. Giovanis initially competed in the Street Tuner (ST) class before making the jump to GS in 2017. This is the first season with series veterans Plumb and Trinkler behind the wheel.

“Obviously we cannot do this without Ted Giovanis and JKTG and his Foundation,” said Plumb. “I got goosebumps at the checkered because I think he, we collectively, have worked so hard for this. I have been in this for a long time, but I don’t think I have honestly worked as a team, collectively so hard, to really fine tune what we do and what we do well and everybody is really on a role. I just can't say enough to Ted Giovanis for giving us this opportunity, it’s awesome and Owen did a great job.”

For Mercedes-AMG, the victory comes five days shy of the one-year anniversary that the manufacturer first unveiled its GT4 racecar. Just one race ago at Canadian Tire Motorsport Park, the Mercedes-AMG GT4 recorded both its first pole position in the Continental Tire Challenge as well as its first podium finish.
Making the Lime Rock win doubly sweet for Mercedes-AMG was the No. 57 Winward Racing / HTP Motorsport of Bryce Ward and Indy Dontje who finished second. The runner-up finish is the best of the season so far for the pair, who missed the Canadian Tire Motorsport Park race after an incident at Watkins Glen International the week prior required repairs to the car.

Polesitters Spencer Pumpelly and Dillon Machavern rounded out the podium in third place for their best result since Sebring International Raceway in March.

MINI Expands Manufacturer’s Championship Lead with Fourth Continental Tire Challenge Win
The tug-of-war manufacturer battle between BMW and MINI in the Street Tuner (ST) class continued at Lime Rock Park, as the latter took back the top stop on the podium on Saturday afternoon.

Getting its second win of the season was the No. 73 MINI JCW Team MINI JCW of Mat Pombo and Mike LaMarra ahead of the pole-sitting No. 81 BimmerWorld Racing BMW 328i of Nick Galante and Devin Jones in second.

After qualifying the car fifth, LaMarra began making his way through the field before handing over the car to Pombo. Pombo took the lead with on Lap 74 and held on for the remaining 35 laps for the win. Prior to Saturday’s race, neither driver had conquered the 1.55-mile bullring circuit.

"There was so much traffic out there with the GS cars and the TCR cars,” said LaMarra. “The first stint I just tried to deliver the car in the best shape possible to my co-driver. I tried to stay out of trouble as much as possible and try to manage the traffic and pass as many ST cars as possible."

With it’s fourth victory of the season, MINI expands its manufacturer championship lead to 202-196 over BMW with four races remaining on the season. BMW owns the two other victories so far this season with Galante and Jones.

The next round for the IMSA Continental Tire SportsCar Challenge will take place at Road America in Elkhart Lake, Wisconsin on August 3 – 5. The two-hour race will be streamed live on IMSA.tv and can be heard on IMSA Radio on IMSA.com and RadioLeMans. Tickets are available at www.roadamerica.com.