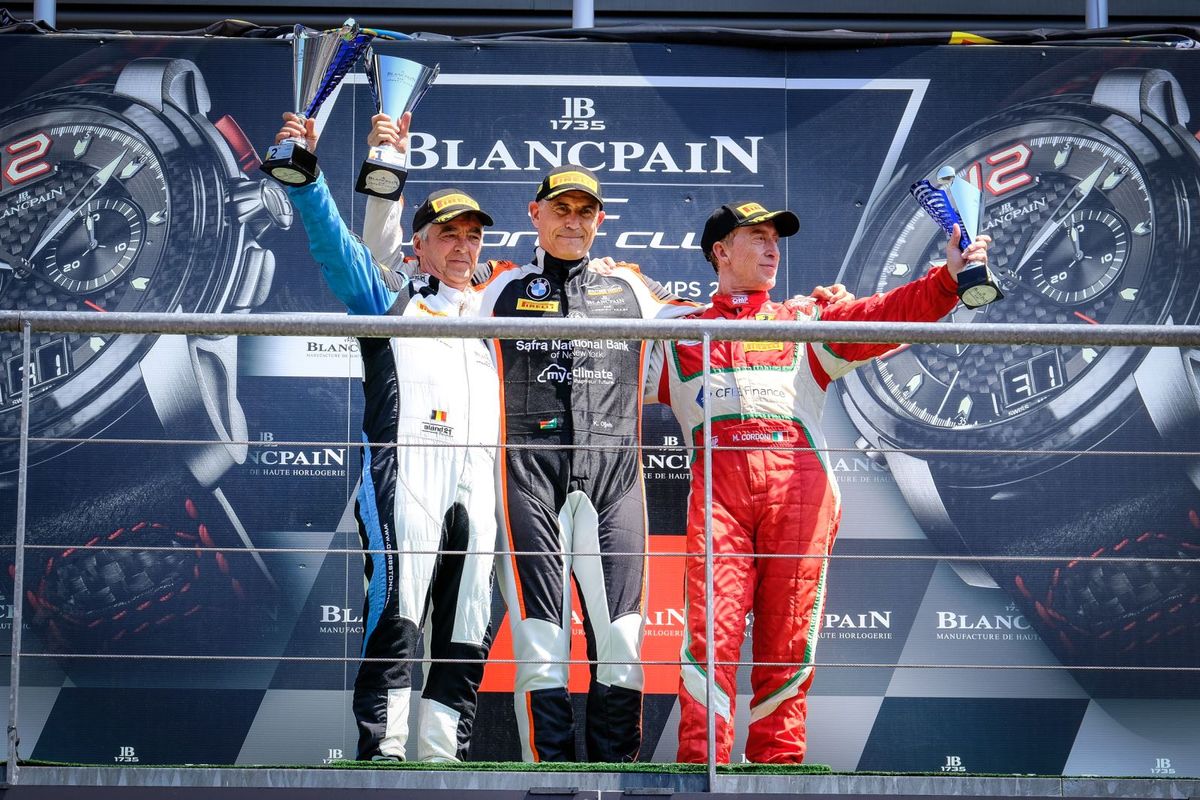 Completing the overall podium was AF Corse pair Patrick Van Glabeke (#488 Ferrari 488 GT3) and Mario Cordoni (#70 Ferrari 488 GT3), with the Belgian scoring his best result of the season in second.

It was a frantic start to the 40-minute race, as Patrick Van Glabeke shot from third to first into Turn 1, squeezing between Karim Ojjeh and Mario Cordoni, with the Italian also moving ahead of the Saudi Arabian driver.

The trio started to pull a gap to fourth, but Karim Ojjeh still had more pace to give, as he slipped into second-place on lap three.  The Boutsen Ginion driver wasn’t done there and within a few laps dived down the inside of Patrick Van Glabeke on the brakes for Les Combes.

After that, there was no catching the championship leader, as he stretched his lead over the Ferraris, before taking a masterful victory at the legendary Belgian Grand Prix venue. Second-place came down to the wire as Mario Cordoni pushed his team-mate all the way, but the Monza race-winner couldn’t find a way through and settled for third.

Behind them, Jürgen Häring and the ever-improving Angélique Detavernier (#55 AF Corse Ferrari 488 GT3) were locked in a tense battle over fourth for the first half of the race, with the latter taking advantage of the German’s mistake in Turn 13 to snatch the position, which she held until the chequered flag.

Murod Sultanov (#23 Kessel Racing Ferrari 488 GT3) also made it past the Lamborghini driver to add a seventh-place finish to his Paul Ricard podium, as Coach McKansy struggled with pace in the Belgian heat to ultimately finish eighth.

Up next for the Blancpain GT Sports Club will be round five of the championship at Budapest, Hungary (1-2 September), which will be live streamed on our YouTube channel, Facebook page and website.

Overall and Titanium Cup winner, Karim Ojjeh, #2 Boutsen Ginion, said: “The start was a bit complicated, Patrick [Van Glabeke] anticipated it very well and then it became an early battle him, Mario [Cordoni] and me. I didn’t know if it was going to be an easy pass on Mario, but he was very cordial and backed out of it at the right moment, it was very clean. With Patrick I sat right on his bumper at Raidillon and stayed close hoping that my braking would be a little better into Les Combes. I slotted it into second gear and made it stick. After that, it was tough with tyre degradation and the brakes weren’t doing so well, but I brought it home so I’m happy. In terms of the championship we’ll just see what happens in Budapest, the aim is to score as many points as possible and not focus too much on the standings.”

Iron Cup winner, Klaus Dieter Frers, #3 Artega Rennsport, said: “It was a tough race, I saw the group in front of me was a bit slower than me, which meant Stephen [Earle] was getting closer. I wanted to overtake [Christian] Hook, but then he slipped by Coach [McKansy] and when I went to also try to pass him I saw this blue smoke and thought it was an engine issue. For a second I lost my concentration, which cost me time and the group behind me closed up. In the end we realised it was actually the tyre rubbing on the wheel-arch but it still plays on your mind. I decided to just focus on defending and manage the rest of the race without making a mistake. It could have been an easier race, but we got there. This year I’ve been far more consistent and in terms of pace we’re right there, so if I can keep this up in the next two I’m sure we can wrap up the Iron Cup title.”