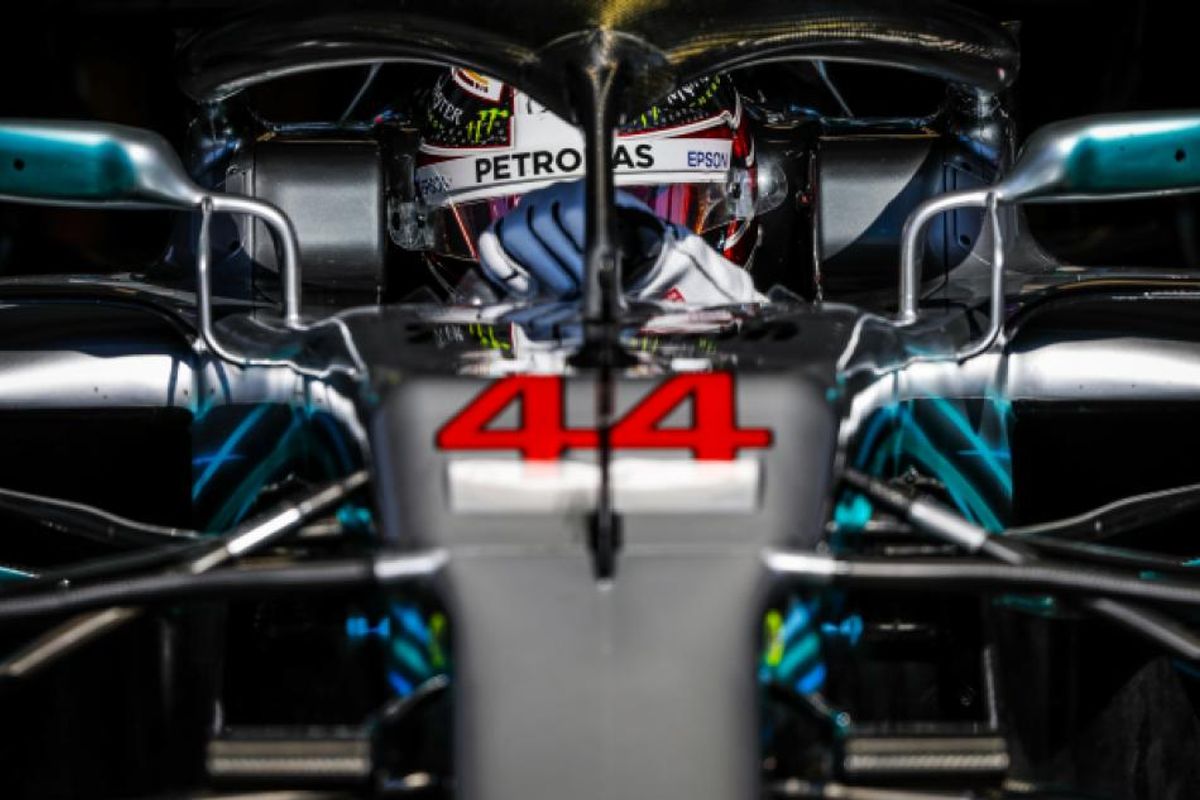 Hamilton had climbed from 14th on the grid to fifth place by the midpoint of the race but with Vettel holding a solid lead after starting from pole position it looked the Briton’s best hope would be to minimise damage in the title race.

However, rain then began to fall. With the shower expected to be brief, the leaders stayed on slick tyres but on lap 52, in worsening conditions, Vettel lost control and slid into the barriers and out of the race.

Hamilton inherited the leader under the resultant safety car and despite the threat of rain in the closing stages the Mercedes driver powered to his fourth win of the season ahead of team-mate Valtteri Bottas and Ferrari’s Kimi Räikkönen.

At the start Vettel made a slower getaway than Bottas but the German took up a good defensive position into the first corner and held his lead. Behind them Max Verstappen attacked Räikkönen, but again, the Ferrari driver held his never and third place as the field swept across the line to begin the second lap. Further back Renault’s Nico Hulkenberg passed Haas’ Romain Grosjean to steal sixth place.

Hamilton, meanwhile, was beginning to charge and by lap six he was up to tenth place and into the points. That became P8 by the start of lap nine as he worked his way past Renault’s Carlos Sainz and the Haas of Romain Grosjean who was struggling with his rear tyres.

At the back Red Bull’s Daniel Ricciardo, the only man to start on medium tyres, was also scything his way through the pack and by lap 11 the Australian had climbed to 13th place. He now sat half a second off Fernando Alonso’s McLaren.

Hamilton’s drive forward continued, and after 14 laps he was in fifth place. Räikkönen then made his first stop, taking on soft tyres. The Finn emerged in fourth place, directly ahead of the Mercedes man. Räikkönen was in control, however, and within a few laps he had pulled out a 3.5s gap over the Briton.

At the front, Vettel was controlling the race perfectly and on lap 19 the home favourite was 4.6s ahead of Bottas with Verstappen a further 5.8s back.

Hamilton was now locked in fourth place behind Räikkönen. Ricciardo, however, was still on the move and by lap 20 he was up to 10th place having powered past Alonso and Sauber’s Charles Leclerc.

Vettel made his first stop from the lead on lap 25 and took on soft tyres. He re-joined the action in fourth place, just ahead of Hamilton, who had yet to make his pit stop. There was no threat though and Hamilton, on 27 lap-old starting softs, could not keep pace with the German and he had soon eked out a 3.0s gap to the Mercedes driver.

On lap 28 Ricciardo, who had enjoyed a productive run to sixth place suddenly as he went through Turns 9 and 10. “Losing power, something’s wrong,” he said before pulling over and stopping at Turn 11.

Verstappen then pitted to take on soft tyres and after 31 laps the order had Räikkönen in the lead, 1.3s clear of Vettel with Hamilton, who had yet to stop, in third ahead of team-mate Valtteri Bottas. Verstappen was fifth ahead of Magnussen, Hulkenberg and Grosjean, with Force India’s Sergio now ninth ahead of Sainz.

Vettel soon began to complain that Räikkönen was holding him up and that he was not only losing time but also destroying his tyres. After a lengthy conversation with Ferrari chief engineer Jock Clear the Fin moved aside and Vettel resumed in the lead.

Hamilton made his pit stop on lap 42 and took on ultrasoft tyres for his final stint, hoping that added performance would allow him to close on the leaders.

The race then took a hugely dramatic turn as rain began to fall at the hairpin. It grew in intensity but with forecasts predicting a rapid end to the shower the leaders chose to stay on slick tyres – and it cost Vettel dearly.

The German lost control in the stadium section and slid off track and into the barriers. What had seemed like a comfortable march to a sizeable points lead over Hamilton had gone disastrously wrong.

The SC was immediately deployed and under the caution, Mercedes pitted Bottas. The crew weren’t ready, however, and the Finn was left sitting on his marks for almost 16 seconds as the team found a set of ultrasofts for him.

Räikkönen, too, pitted and like Bottas he fitted a new set of ultrasoft tyres for a final blast, if conditions allowed.

The SC left the track at the end of lap 57 and despite a strong attack from his team-mate Hamilton held the lead ahead of Bottas and Räikkönen. Bottas was then told to hold position and 10 laps later Hamilton crossed the line to take his 66th career win ahead of his team-mate and Räikkönen. Verstappen then took fourth place ahead of Hulkenberg, Grosjean, Perez and Ocon. Sauber’s Marcus Ericsson was ninth and the final point went to Toro Rosso’s Brendon Hartley.