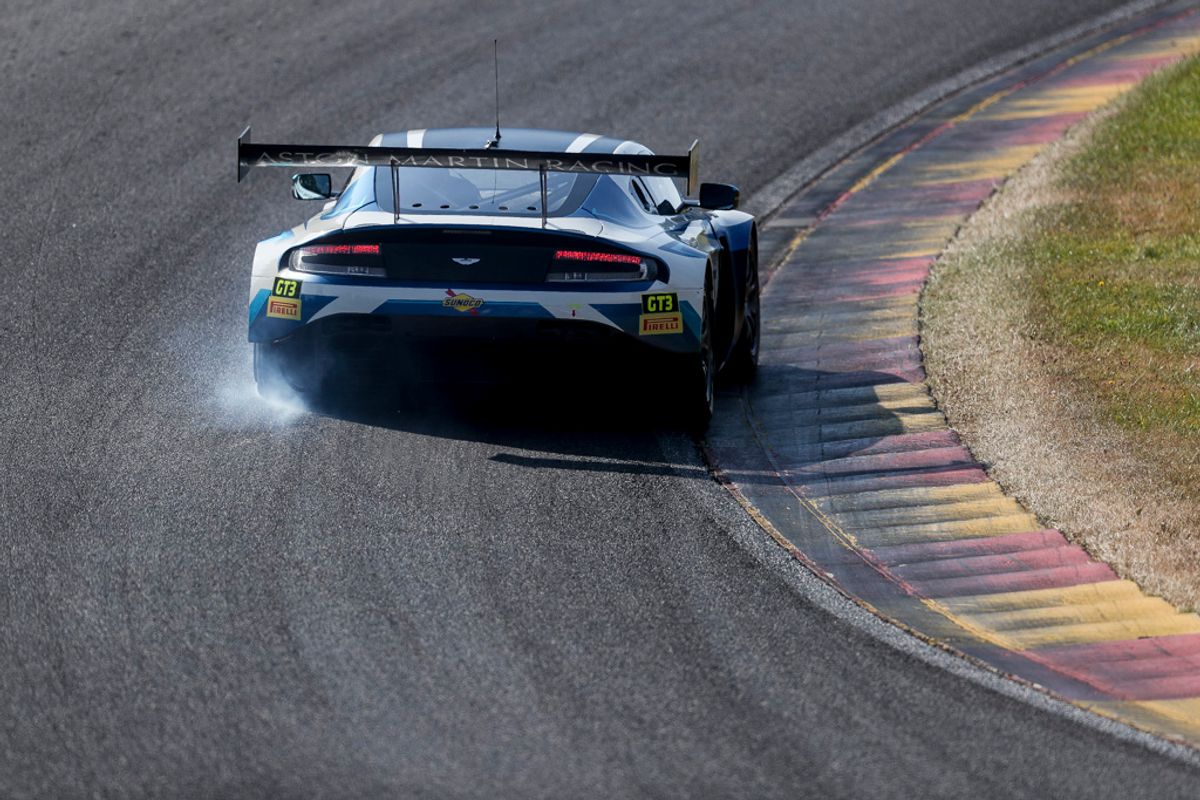 Having shone throughout practice, Optimum Motorsport brought it all together in style to claim a superb pole position for the seventh round of the British GT Championship at Spa Francorchamps. Despite a massive early race setback, the team recovered to secure a third-place finish, keeping them firmly in the title hunt with just two rounds remining.

Flick Haigh and Jonny Adam dominated the pre-event test at Spa and ran second in the official practice sessions ahead of qualifying where their best efforts were rewarded with the pole position in the #75 Aston Martin Vantage GT3.

Flick made a great getaway at the start and following an early safety car was able to pull a six second margin over the field. The turning point came on lap nine when the left rear internal wheel arch detached, resulting in a spin for Flick. Thinking she had suffered a tyre failure, Flick took the next few turn gingerly as the field passed by.

Quickly realising the tyre was still inflated, Flick got back up to speed having dropped to 13th position but unfortunately the damage - in terms of the race victory - was done. Flick continued to set fastest laps of the race throughout her stint, moving back up to eighth position before pitting to hand over to Jonny.

Having finished third at Silverstone last time out, the team had to take an additional ten second success penalty during the stop, but with others having their own issues, this meant fifth position in the race as Jonny restarted the racing action.

Jonny then found himself in a battle with Marco Sorensen for position and with Yelmer Buurman dropping back, this soon came a battle for the final podium position. Adam pushed on, closing in on the TF Sport Aston Martin ahead and at the chequered flag. Following the race, the third-placed car was handed a time penalty, promoting Optimum to third.

The result keeps the team, Flick and Jonny firmly in the British GT Championship battle with just two rounds remaining, the first of which gets underway in two weeks’ time.

“Ultimately, we finished fourth on the road and it’s a good haul of points when many of our rivals have finished behind us and with no penalties at Brands, we hope it’s all to play for going into the last round at Donington.

“In the race, we lost a wheel arch which put Flick into a spin at the end of the Kemmel straight and her immediate thoughts were that it was a puncture. She proceeded back to the pits slowly and then realised the car felt good and she pressed on. It looked like zero points and big championship setback, so get back to P4 with solid points in the bag is a very good result. We’ll take that today.”

Flick Haigh
“The wheel arch casing came out of the car and run under the tyre and that of course spun me around. I couldn’t go anywhere as I was stopped on a blind corner. Whatever was holding it on became detached and that was it, the advantage at the head of the field lost. It was still a good recover to finish P3, but as ever, we always want more, we wanted the win.”

Jonny Adam
“Championship-wise, it’s not a bad day and we really showed the pace both of us had today. Flick was very quick and my stint was good. So, while the result is  good for the championship, the race could have been better were it not for the wheel-arch issue.”