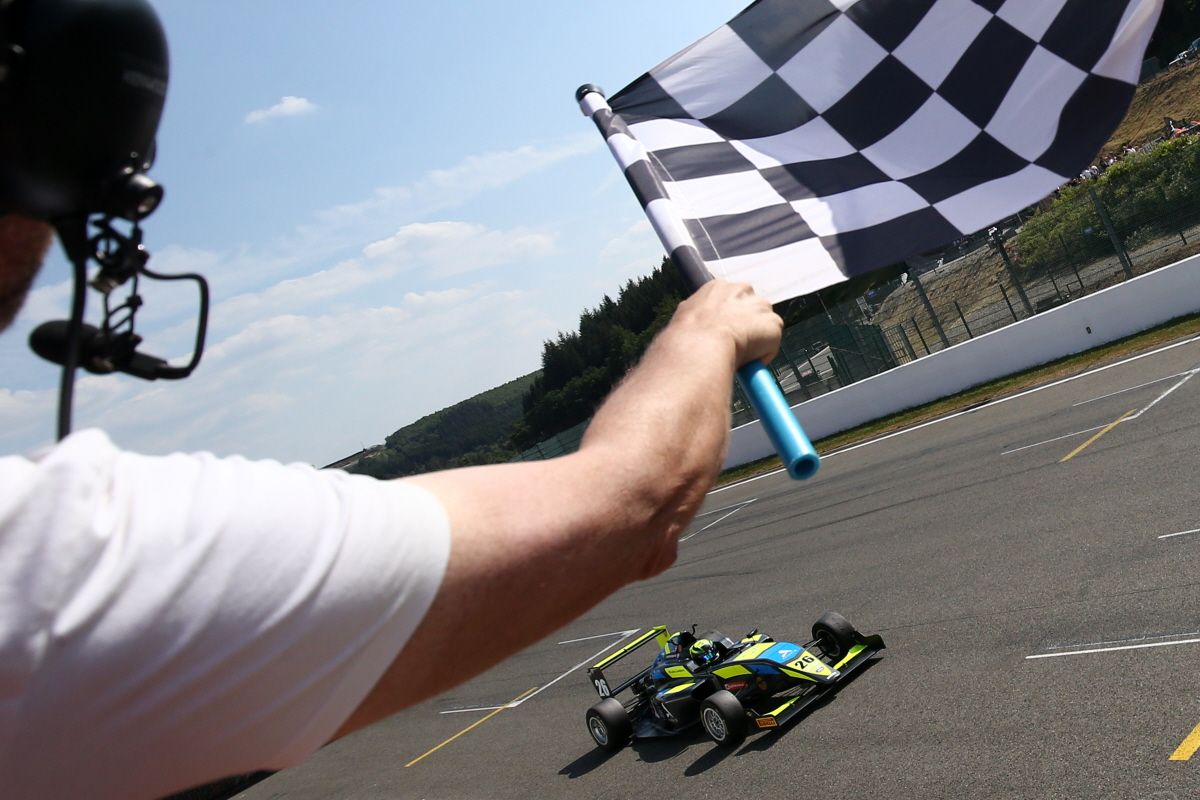 Having won at every circuit he has visited in British F3 this year, his first season in the category, Lundqvist’s victories in rounds 13 and 15 at Spa mark his first weekend double of the season and increase his tally of wins for the year to six.

Race one was a particular highlight for Double R with Krishnaraaj Mahadik finishing in third place to chalk-up his second podium of the year for the Woking squad – he also climbed into the series top five. Pavan Ravishankar, meanwhile, took a best finish of 13th position in the opening encounter.

“It’s been a pretty fantastic season up to now in F3 but this weekend has been the best yet”, said elated Double R team principal Anthony Hieatt, “Linus did a mega job as always, he was quick all weekend and to take two wins is perfect for the championship. You can never be complacent but leading by 120 points at this stage of the season is a great position to be in.

“We’re pleased to see Krish back on the podium for the second time this year, it’s always nice to have two drivers up in the top three in a race, and although Pavan wasn’t able to break into the top 10 this weekend he gained good experience at one of the world’s toughest tracks.”

Qualifying at Spa on Friday, 20th July, was impossibly tight with only half a second covering the top 14 drivers and Lundqvist – who topped two of the preceding three test sessions – only just missed out on pole position for round 13 by a mere 0.080 seconds. Mahadik was seventh in qualifying, only 0.2 seconds away from pole, while Ravishankar set the 15th best time.

Although edged back to third place initially during race one on Saturday, Lundqvist quickly hit back to retake second and then set his sights on pole position qualifier Tom Gamble before passing his rival on lap two.

Following the appearance of the Safety Car on the third tour, due to a heavy excursion for Max Defourny at Raidillon, racing resumed on lap four and Lundqvist opened an advantage of 0.6 seconds, while also setting the fastest lap to that point. Although the gap to Gamble was never much more than half a second, Lundqvist was in control and on lap eight he wrapped-up his fifth win.

Mahadik joined his Double R team-mate on the podium with a fantastic drive to third place from the fourth row. Impressively slicing his way through into the top four on lap one, the Indian produced fastest lap pace early on and following the Safety Car period he pressured for third before passing Manuel Maldonado on lap six to seal his second rostrum finish of the campaign.

Singapore’s Ravishankar maintained his grid placing initially, before moving up into 13th position prior to the cautionary period. Remaining there to the chequered flag on lap eight, Ravishankar was a mere 0.1 seconds shy of the top 12 at the conclusion.

Ravishankar was the highest placed Double R driver on the fully reversed grid for round 14 on Sunday morning, starting sixth, but an unfortunate tangle at La Source resulted in a significant loss of time and an eventual finish of 17th position.

From 15th on the grid, Mahadik put together a super-impressive opening lap to slice into seventh and after climbing into the top six on lap two, he then grabbed fifth on lap five from Jamie Chadwick. Remaining there to the flag on lap nine, post-race he was handed a one second penalty – dropping him to sixth – after being adjudged to have had all four wheels off track when passing Chadwick.

Points leader Lundqvist, from the back of the grid in 18th position, gained four places on lap one and by mid-distance he was knocking on the door of the top 10. After a shake-up on lap five, the Swede leapt into the top eight and also set fastest lap before then taking seventh on the penultimate tour. Holding seventh into the ninth and final lap, Lundqvist was edged back to eighth before the finish.

Round 15 on Sunday afternoon began with Lundqvist second on the grid but he moved into the lead on lap two with a good move at Les Combes. Instantly opening a healthy advantage at the front, he pulled 1.6 seconds clear by the start of lap four before controlling the remainder of the contest.

From fifth on the grid, Mahadik was shuffled back to the tail of the top 10 on the first lap but he did manage to fight back into eighth position into the second half of the encounter. At the flag, he was just 0.3 seconds shy of the next car on the sprint to the line.

Ravishankar started round 15 from 13th on the grid but had a tough challenge ahead of him after the first lap, when he slipped back to 17th position. Making some progress back through the order, he climbed into the top 15 before the finish.

Brands Hatch Grand Prix Circuit in the UK will host rounds 16, 17 and 18 of the BRDC British F3 Championship season a fortnight from now, over the weekend 4th/5th August.

Before then, Double R Racing’s British Formula 4 squad will be back in race action next weekend, 28th/29th July, at Snetterton 300 Circuit in Norfolk for the start of the second half of its 2018 campaign.