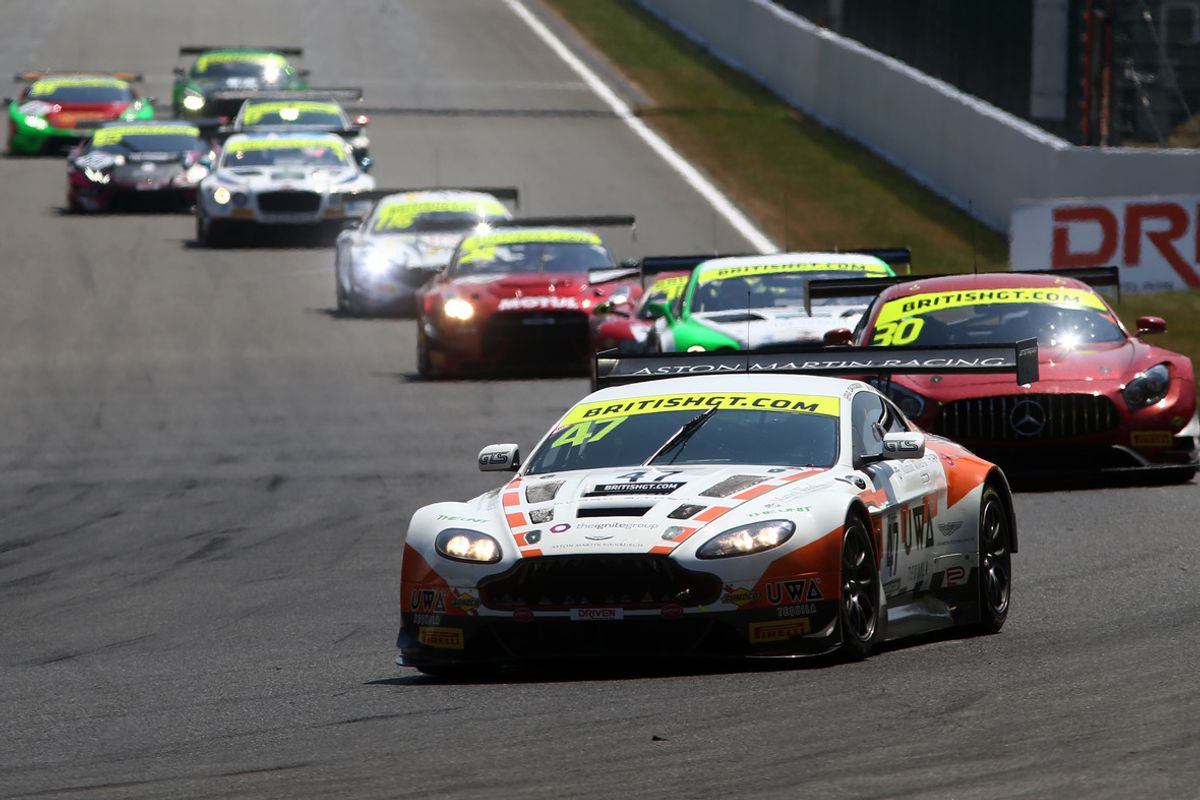 Jetstream Motorsport Aston Martin drivers Graham Davidson and Maxime Martin claimed victory after an epic two-hour race at Spa-Francorchamps. After a race of attrition, it marked the fifth win in the 2018 British GT Championship for the Aston Martin V12 Vantage GT3 in its swansong season.

The grid comprised a combined total of 30 prestige brands including Aston Martin, Lamborghini, Bentley, McLaren, Mercedes-Benz and BMW. All the GT3 and GT4 cars were exclusively equipped with Pirelli P Zero DHD2 and DH tyres respectively.

The race was the headline event of SRO Speedweek, an action-packed weekend of racing. The weekend featured four championships exclusively supplied by Pirelli, including the popular GT4 European Series, which also uses the Pirelli P Zero DH tyre.

Season-opener winners Flick Haigh and Jonny Adam of Optimum Motorsport claimed pole position with a combined time of 4m41.566s in their V12 Vantage GT3. The Tolman Motorsport duo of Charlie Fagg and Michael O’Brien, in a McLaren 570S GT4, posted a time of 5m04.248s to grab the GT4 pole position.

Spa’s GT3 Entrée
Mark Farmer’s TF Sport Aston Martin quite literally got the race off to a fiery start, catching fire on the way down to Eau Rouge and bringing out the safety car. During the race-restart, eventual race winner Davidson dropped to fifth position, but made his way up the field to eventually claim first place and hand over driving duties to teammate Maxime Martin. The Belgian factory-backed Aston Martin driver was able to seal the team’s first win of the season home after comfortably maintaining the lead.

A GT4 double helping
In the GT4 class of British GT, BMW M4 GT4 Century Motorsport drivers Dean MacDonald and Jack Mitchell emerged ahead of the pack after a driver change during a safety car. Mitchell was able to hold off numerous advances to seal the pair’s first win of the season. In the GT4 European Series, Phoenix Racing Audi R8 LMS GT4 drivers Milan Dontje and Nicolaj Møller-Madsen claimed victory in race one, with Stéphane Tribaudini and Pierre-Alexandre Jean winning race two in an Alpine A110 GT4.

Jonathan Wells, Pirelli UK motorsport manager:
“This weekend served as the perfect taster for the 24 Hours of Spa next weekend, delivering a brilliant and entertaining race. The GT3 cars used the same Pirelli P Zero DHD2 tyre which will be used for the Total 24 Hours of Spa, so this provides some interesting insight. Ambient and track temperatures peaked at 29 and 39 degrees respectively today giving us some useful data for the 24-hour race. As we’ve seen previously during the British GT season, GT3 and GT4 are all-out sprints to the finish, no matter how long the races are. The tyres have both demonstrated their capabilities yet again, in being able to cope with the demands placed on them by the drivers and this incredible circuit.”

What’s next?
Round six takes place at Brands Hatch in Kent on August 5-6 with a two-hour race on the iconic GP Loop, a circuit variant that is only used on select occasions throughout the year.ilestones in automotive history. In 2017, over 120 car clubs displayed more than 10,000 classic cars.