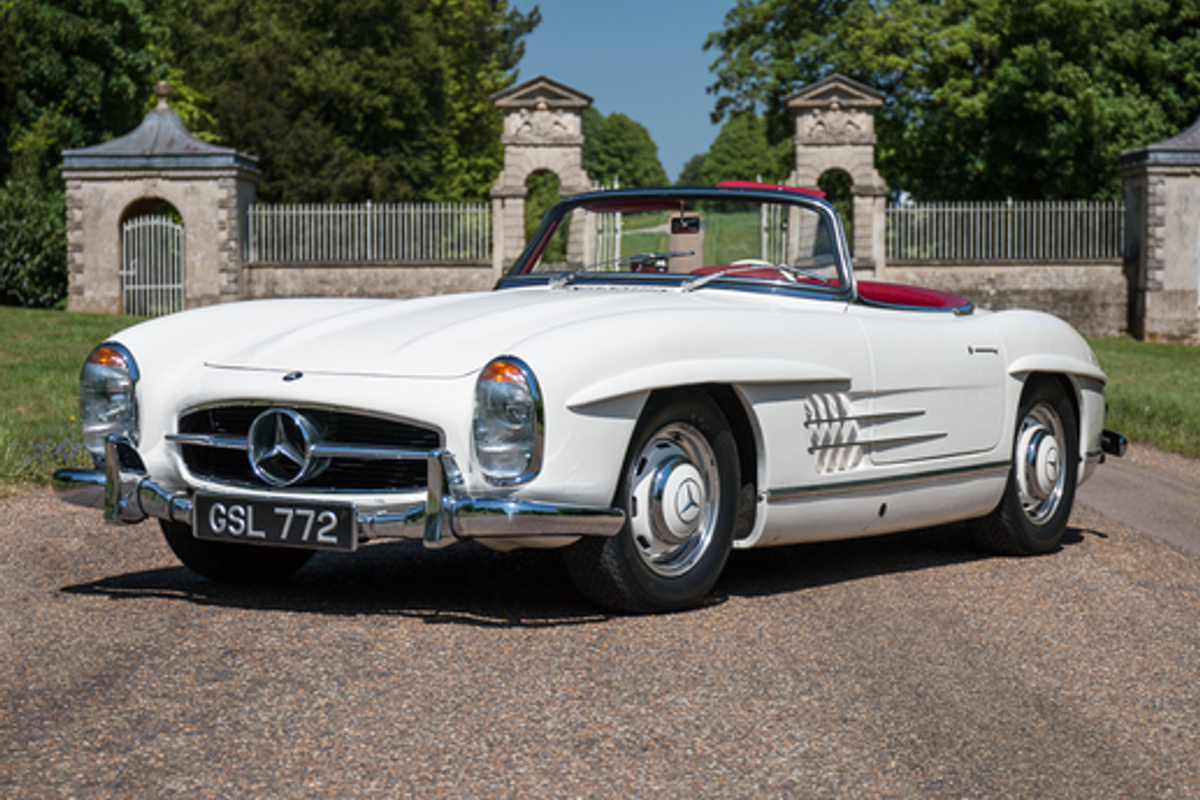 A beautiful, matching numbers, 300SL Roadster from long-term private ownership
Supplied new to the USA in 1958 and imported to the UK in 1999
Fully documented restoration by a 'Who's Who' of the UK's leading 300SL specialists
Returned to the road in 2001 and continuously maintained by a succession of marque experts
From a genuine and enthusiastic private owner. For sale for the first time in nearly twenty years

Persuaded by New York's Max Hoffman, the legendary, larger-than-life, post-war Mercedes distributor for North America, the factory agreed to produce a road-going version of their dominant W194 Sports Racing Car car to appeal to the American market and create a new brand image for the German manufacturer. It was to be known as the 300SL, featured a number of technological firsts, and would be produced in comparatively low numbers. It was a significant commercial success and today is undoubtedly the most collectable Mercedes-Benz of them all.

Launched in 1954, as a two-seater coupé with distinctive 'Gull-wing doors', it was badged '300 SL' (Sport Leicht/ Sport Light) and was followed a couple of years later by the convertible 'Roadster'. Both cars utilised direct mechanical fuel injection, a synchromesh gearbox, and power brakes, the first ever production cars to do so, and power output was an impressive 212bhp, 25% up on the  Le Mans W194 and not far short of the 250bhp developed by the W196 R Grand Prix car.  Uniquely, the car was clothed in a steel body enveloping a welded aluminium spaceframe chassis making it considerably stronger and more rigid without the penalty of extra weight. The bonnet, doors and boot lid were all aluminium, helping the SL to live up to the “Leicht” in its name and the combination of this innovative construction and the Bosch-injected, three-litre, straight-six resulted in the 300SL becoming the fastest production car in the world at the time with a top speed of 160mph. Max Hoffman's suggestion that Mercedes should unveil the car at the New York Auto Show, rather than the more traditional Frankfurt or Geneva, proved wise as the Gull-wing was an instant success with 80% of the car's production finding homes in the USA.

This car is an early 300SL Roadster supplied new to the USA in 1958 and is one of just 1,858 ever built. Our enthusiastic private vendor is the only owner since the car arrived here in the UK in 1999 when it was imported by and purchased from Brian Classic. Our vendor immediately set about a thorough restoration of the whole car and fortunately kept a detailed photographic record of the entire process which is now in the accompanying comprehensive history file.

The mechanical work was entrusted to Ron Waghorn (one of only two UK Mercedes-Benz engineers invited to Germany to be factory trained on the 300 SL from launch) who rebuilt the engine fully, including the infamous injection pump, which is the very heart of the engine in the 300SL. He also rebuilt the gearbox and transmission systems, whilst renowned ex-McLaren engineer, Kerry Adams checked the frame and body panels. The bare metal repaint was entrusted to APR Cars of Ruislip in Middlesex and most of the interior was accurately re-trimmed by Morris McDonald of Watford, including restoring the leather seats, soft top, door cards and other leather areas. Finally finished late in 2001, the car was instantly put to good use by our vendor who has subsequently enjoyed trips all over Europe - including Scotland, Italy, France, Switzerland, Jordan, Ireland and Monaco!

He has covered a total of 9,000 miles in the car during his ownership since the restoration, taking the total mileage to just over 89,000. Throughout that period, the car has enjoyed methodical and comprehensive maintenance, initially by Ron Waghorn until he retired in 2005, and then by Tommy Johnston (the only other man who received factory training on the 300SL!) up until his retirement in 2011. Since then it has been maintained annually by the highly respected Neil Corns of Omega Motorsport. In March 2017 the injection pump was returned to HK Engineering in Germany, the global specialists in 300 SLs, for a rebuild of the injector fuel pump (at a cost of 13,800 Euros) and the accelerator pump (a further 2,120 Euros) as part of Neil's annual maintenance programme.

This gorgeous car is finished today in its original colour scheme of Cream with Red leather and remains happily mated to its original engine, gearbox, and back axle making it a totally matching-numbers example. It comes from a genuine and enthusiastic private owner and represents a very rare opportunity for the next custodian to use and enjoy an exceptional car with great patina, an outstanding maintenance record, and perfect provenance.