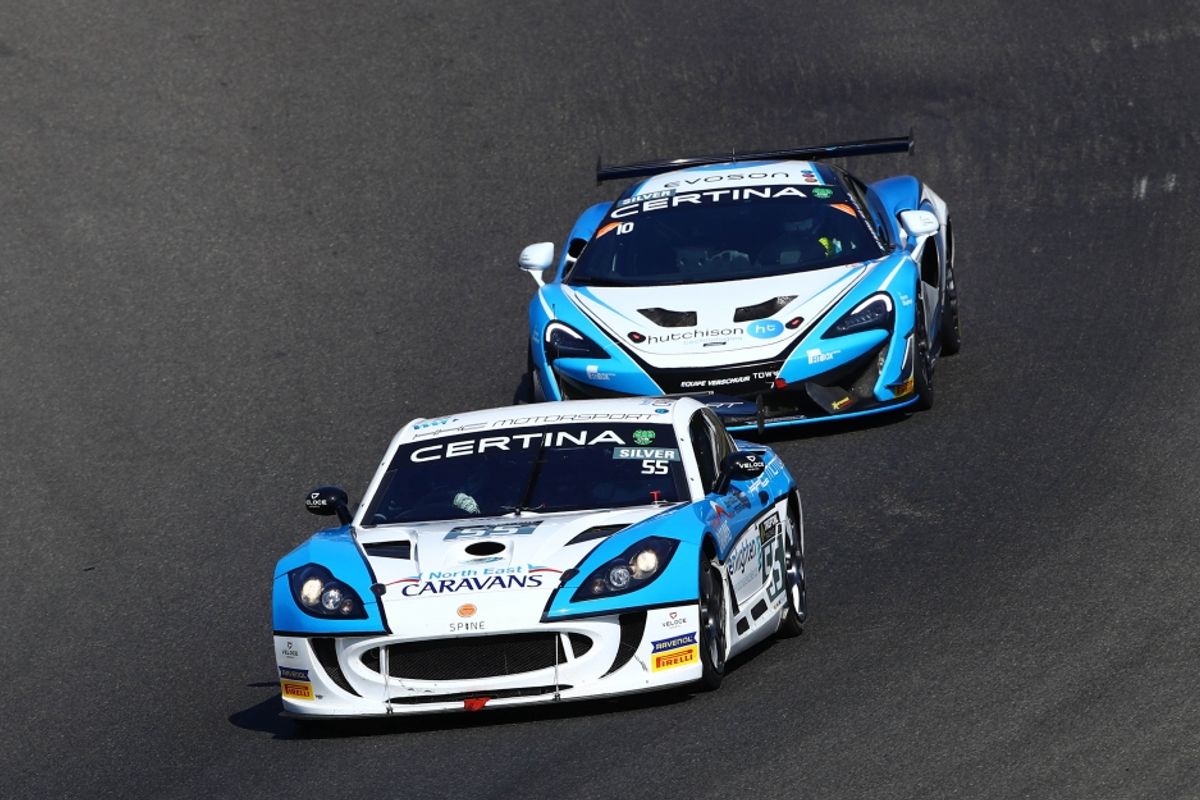 Rapid GT4 European Series team-mates Will Tregurtha and Stuart Middleton recorded their fifth podium result of the season at Spa-Francorchamps on Sunday, 22nd July, and also departed the Belgian track with an enhanced provisional championship lead of 18 points.

Delivering their customary searing pace in qualifying, the 18-year-old HHC Motorsport pairing took front row starts for both of the weekend’s 60-minute encounters and after finishing fourth in round seven, the BRDC Rising Stars returned to the podium in round eight with a terrific second place.

Continuing their record of finishing on the podium at every circuit they have visited this year, the Ginetta Driver Development Programme duo head into the long break before the penultimate event in September, at the Hungaroring, justifiably satisfied with their maiden European season to date.

Lapping seventh fastest in opening practice on Friday, 20th July, the No.55 HHC Motorsport entry was eighth in session two and in qualifying on Saturday, 21st July, the team-mates were expectedly quick in their Ginetta G55 GT4 as part of an immense 48 car entry.

Due to a penalty applied to the pole position car, though, Tregurtha actually started race one on Sunday morning from first place. Unfortunately shuffled back to fourth on a busy opening lap, Tregurtha was then edged to fifth before the Safety Car was deployed at the beginning of lap three.

Racing resumed the next time around and Tregurtha maintained position until the pit-stop window opened at the 25-minute mark. Remaining on track while rivals served their stops, the Enlighten and Spine Optics backed racer moved into the top three and then the race lead.

Serving the mandatory pit stop on lap 11, Tregurtha handed the car to Middleton and when the order settled he held seventh position. Moving into the top five soon after, Middleton began to pressurise the No.35 Alpine ahead and a great battle ensued with the rivals trading places.

With just four laps to go, and as a result of a stop-go penalty for the race leading Porsche, Middleton held fourth place ahead of the Alpine and was within just 0.4 seconds of the podium. Swapping places again late-on, North East Caravans, Steel & Jelly and Spine Optics supported Middleton eventually secured fourth and just missed the top three by half a second.

Round eight on Sunday afternoon began with Middleton second on the grid and throughout his stint he shadowed the pole-starting Alpine. Running just 0.7 seconds shy of the leader into lap two, the HHC racer closed the gap to 0.5 seconds and remained in the wheeltracks of the Alpine right up until the pit-stop window opened – also setting the fastest lap of the race, a time of 2m34.288 seconds.

Hoping to benefit from an under-cut during the mandatory driver changes, and not wishing to lose any potential time bottled up behind the first placed car, Middleton headed for the pitlane at his earliest opportunity on lap 10 to hand over to Tregurtha.

When the race order settled Tregurtha held second place, 1.8 seconds behind the Alpine, and although closing to within a second of the leader no real opportunities to try and challenge were presented to the Ginetta driver.

Focusing on bringing the No.55 car home safely during the closing stages, a huge distance ahead of the chasing pack, Tregurtha wrapped-up a welcome and well deserved second place finish for the reigning British GT4 Champions to add yet more points to their already healthy championship total.

Will Tregurtha:
“It was a little bit tricky this weekend with the long straights suiting some of the other cars more, but we all did a good job and the guys in the team gave us a fantastic car again. Stuart managed to get a gap at the start in the second race, I’m not sure how he did it, but we got a gap and managed to pull away from third. The other cars were fighting a lot and using up their tyres, which worked for us.

“At every track we’ve been to this season we’ve been on the podium, we’ve either been second or first each weekend which is pretty good. Fourth in the first race was a little disappointing, but still good points and some of our main rivals had mechanical problems. Leading by around 20 points going into the Hungaroring is good, the track should suit us and I think we’ll be pretty fast there.”

Stuart Middleton:
“We did what we needed to do this weekend so we’re really happy. In qualy we were rapid, I squeezed every bit of pace out of the car I could but going into the races we knew it would be tough with all of the other cars being so much quicker than us with straightline speed. That was difficult to deal with, trying to race the other cars on the straights, but HHC did an amazing job with our car.

“I’ve absolutely loved being back at Spa, it’s the sort of track which suits me quite well and I think I maximised everything to the full. It’s been a top job by the team and Will again, we bagged a good amount of points for the championship and extended the lead. It’s been an awesome weekend and we’re definitely feeling confident going to Hungary next.”

The fifth event of the GT4 European Series campaign, the penultimate race meeting of the season, will take place over the weekend 1st/2nd September at the Hungaroring near Budapest in Hungary.