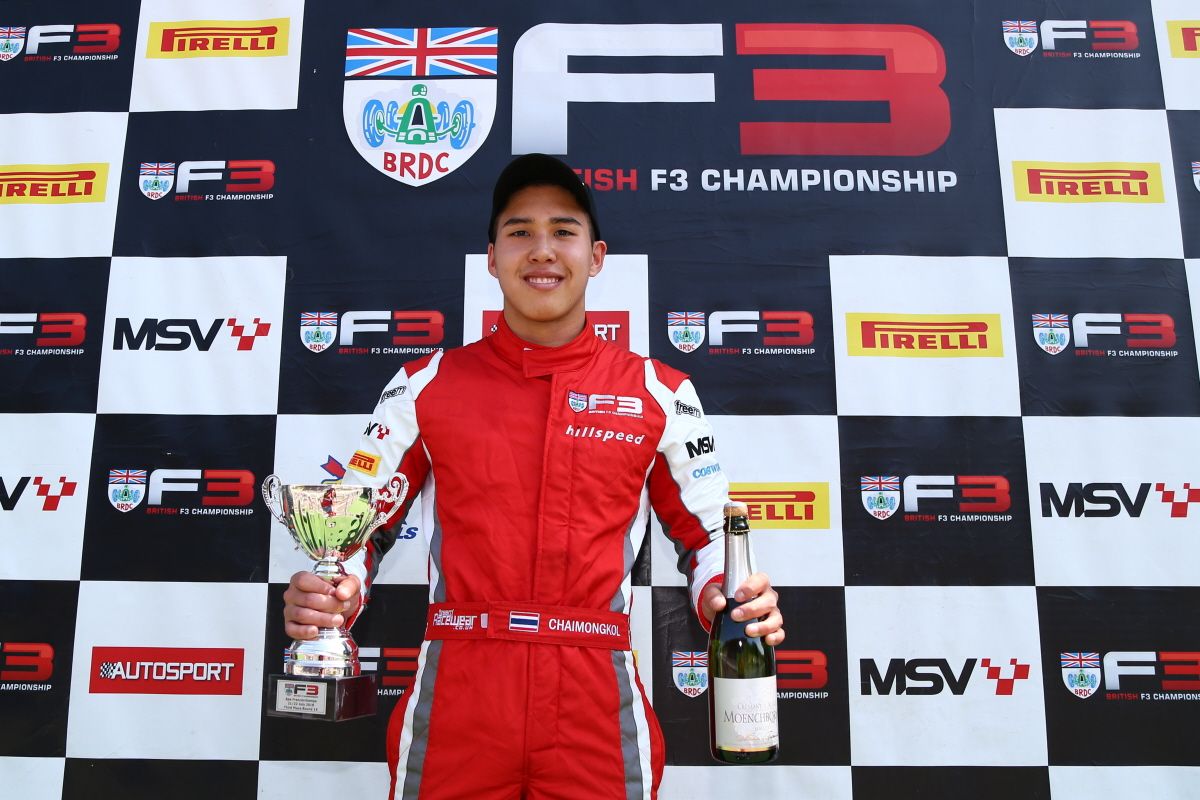 Talented young BRDC British Formula 3 Championship driver Sasakorn ‘Cutter’ Chaimongkol raced to a fabulous runner-up finish during round 14 of the season at the legendary Spa-Francorchamps on Sunday, 22nd July, to secure his and the Hillspeed team’s second podium finish of 2018.

Racing well and delivering strong pace throughout the fifth race meeting of the year at the Belgian track, Thai driver Chaimongkol bagged a very healthy haul of points by book-ending the race two podium with top 10 results in rounds 13 and 15.

Germany’s Jusuf Owega, part way through his maiden season in car racing in the hugely competitive British F3 category this year, started the weekend with a top eight finish in race one on Saturday, 21st July, and added ninth place in round 14 before sealing a career-best top five in the finale.

Hillspeed’s third driver, Ben Hurst, improved throughout the event and so did the Canadian’s results with 17th position in race one, after an enforced pit visit, 14th place in the second contest and then a stronger 13th spot in round 15. Most impressive was the leap forward in pace, comparative to his more experienced rivals.

“What a brilliant weekend it’s been for us at Spa”, said Richard Ollerenshaw, team principal of Hathersage-based Hillspeed, “I’m so pleased to have seen an increase in the performance of all three drivers and perhaps most notably Ben, he made a significant step forward with all of the work we’ve done with him. He made exceptional progress this weekend.

“It’s fantastic to see Cutter back on the podium, the only disappointment about the second race was I think we could have had two cars up there if Jusuf hadn’t been T-boned off at the start. He raced back through very well, but the damage was done. Overall, though, he had a very strong weekend.”

Ollerenshaw added: “Spa is a difficult track, particularly for three young and inexperienced drivers, but we’ve always worked hard there as a team and enjoyed some good success over the years. The podium from Cutter and the other performances show we’ve got a fast package.”

Hillspeed trio impress at legendary Ardennes track
All three Hillspeed drivers performed very competitively in an extremely close qualifying session on the 4.3-mile track on Friday, 20th July, with Owega only 0.2 seconds away from the pole position time but having to settle for eighth on the race one grid. Chaimongkol was less than 0.2 seconds further adrift, securing 11th fastest, while Hurst was 19th but just 0.1 seconds shy of the top 18.

Round 13 took place on Saturday and as Owega maintained his starting slot, Chaimongkol moved up into the top 10 with Hurst gaining two places to climb into 17th position. On lap two, though, both Owega and Chaimongkol lost ground and slipped to 12th and 15th respectively, while Hurst moved up into 16th place, following a hefty accident at Raidillon for Max Defourny.

After a Safety Car period the next time around, when racing resumed on lap four Owega was able to break back into the top 10, Chaimongkol climbed into 12th and Hurst moved into the top 15. Unfortunately for the Canadian, though, an enforced pit visit led to an eventual finish of 17th spot.

Owega and Chaimongkol both made further progress during the closing stages with the young German moving up into the top eight, just 0.4 seconds shy of Kush Maini at the flag, and Thai racer Chaimongkol taking a top 10 finish on the final lap.

For the reversed grid race on Sunday morning, round 14, Hurst lined-up on the front row in second place, Chaimongkol started in ninth and Owega was in 11th place. When the lights went out all three got away from the line well, but Owega was hit by a rival at La Source and recovered in 16th place.

Hurst ended lap one in fourth spot with Chaimongkol putting together a very strong start to climb into the top six. On lap two, the Thai racer moved ahead of his team-mate and also broke into the top four as Hurst slipped back to seventh but continued to drive well.

Pressuring for third place, Chaimongkol passed Ayrton Simmons on lap four and then set his sights on Tristan Charpentier who the Hillspeed driver shadowed lap after lap. Looking every which to try and pass, he took the flag in third but, post-race, officials deemed Charpentier to have weaved too many times to keep Chaimongkol behind. Swapping their positions, the Thai was elevated to second.

As Hurst dropped back to an eventual finish of 14th position with several of the more experienced competitors making their way up the order, Owega fought back impressively from his lap one delay and only just missed out on a top eight result by a mere 0.025 seconds on the sprint to the line.

Running in 12th position as the race reached mid-distance, Owega broke into the top 10 on lap six ahead of title contender Nicolai Kjaergaard. Passing Kush Maini for ninth on the penultimate tour, Owega pressed championship leader Linus Lundqvist on the dash to the flag to cap a great recovery.

Race three of the weekend, round 15, started with Owega in eighth position on the grid and after gaining a place on lap one he was edged back to eighth the next time around. On lap four, though, the 16-year-old moved ahead of both Charpentier and Kjaergaard to climb into the top six.

Looking set to remain sixth to the chequered flag on lap nine, on the final tour Owega was able to get ahead of 2017 British Formula 4 Champion Jamie Caroline to take an extremely well-deserved season-best fifth position.

From the fifth row of the grid in 10th place, Chaimongkol did slip a place on lap one and was bundled back three more places on lap two. Determined to hit back, the Hillspeed driver had broken into the top 10 by lap eight where he eventually ended the contest.

Hurst retained his grid slot of 16th place over the course of the first lap and raced well to remain there past mid-distance when he climbed into the top 15. Gaining two further places before the final lap, the Canadian capped a strong event on his maiden visit to Spa with a weekend best 13th spot.

British F3 now returns to UK soil for the sixth race meeting of the 2018 season, which will take place over the weekend 4th/5th August, at Brands Hatch Grand Prix Circuit in Kent.