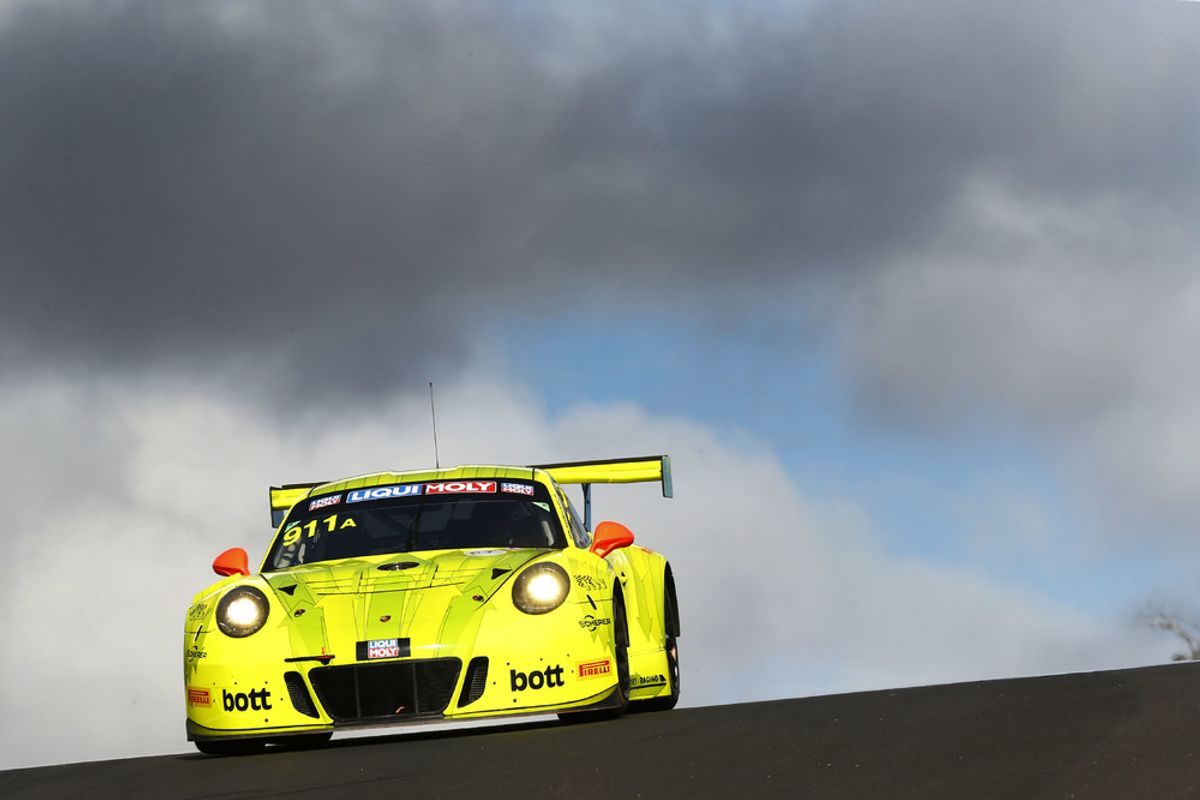 Four Porsche 911 GT3 R race cars will contest the 70th running of the 24 Hours of Spa. Regarded as one of Europe’s major long-distance classics alongside the 24-hour races of Le Mans and the Nürburgring, Spa marks round two of the Intercontinental GT Challenge and the fourth race of the Blancpain GT Series Endurance Cup. Porsche supports four customer teams with works drivers and engineers at the race on 28-29 July. Tackling the event are the two Porsche teams from the Blancpain GT Series Endurance Cup, Manthey-Racing and Herberth Motorsport, as well as the KÜS Team75 Bernhard and Black Swan Racing squads. Six current works drivers as well as the former factory driver and the current head of Porsche Customer Racing, Marc Lieb, form the driver crews in the four ca. 500 hp customer racers. For the marathon race in Belgium, 68 cars from 13 marques are entered. In addition to the 64 vehicles that comply with the FIA GT3 regulations, four other vehicles are registered, including three Porsche 911 GT3 Cup cars.

The race
First contested in 1924, the Spa 24-hour race is just one year younger than the legendary long-distance classic at Le Mans. The last overall victory for Porsche in the Ardennes was achieved in 2010 with Romain Dumas, Jörg Bergmeister, Wolf Henzler and Martin Ragginger in the Porsche 911 GT3 RSR fielded by the BMS Scuderia Italia team. Since 2011, the event on the 7.004-kilometre Circuit de Spa-Francorchamps has represented a highlight on the international GT3 calendar. The presentation of the race cars on Wednesday in a motorcade from the racetrack to the town of Spa has become legendary. The race takes off on Saturday at 16.30 hours.

The Porsche drivers
The cockpits of the two 911 GT3 R entered in the pro-driver category are shared exclusively by works drivers: Competing for Manthey-Racing are the regular drivers in the Blancpain GT Series Endurance Cup, Romain Dumas, Frédéric Makowiecki (both France) and Dirk Werner (Germany). The car run by KÜS Team75 Bernhard is shared by the two former Le Mans overall winners Timo Bernhard (Germany) and Earl Bamber (New Zealand) as well as the Le Mans class winner Laurens Vanthoor (Belgium). The two American drivers Tim Pappas and Marc Miller join forces with Jeroen Bleekemolen (Netherlands) to contest the Pro-Am class for Black Swan Racing. They will be supported by Marc Lieb, who was part of the team at the first race of the Intercontinental GT Challenge at Bathurst, Australia, in February. Herberth Motorsport’s 911 GT3 R is piloted by Jürgen Häring, Edward-Lewis Brauner, Wolfgang Triller and Alfred Renauer. The four Germans will tackle the amateur category for gentleman drivers. With Dumas, Lieb and Vanthoor, there are three drivers in the Porsche squad that have already scored overall victory at Spa.

The Porsche 911 GT3 R
The 911 GT3 R was designed by Porsche for worldwide GT3 series. Mounted with the ultra-modern, four-litre flat-six engine with direct fuel injection, the 368 kW (500 hp) customer sports racer celebrated its race debut in January 2016 at the Daytona 24-hour race. Since then, it has notched up victories in numerous international racing series, such as the IMSA SportsCar Championship, the World Challenge, the ADAC GT Masters, as well as the 24-hour race on the Nürburgring-Nordschleife. For 2018, Porsche offers its customer teams an evo-kit.

The schedule
The 24 Hours of Spa takes off on 28 July at 16.30 hrs CEST and will be broadcast live on the websites of the Intercontinental GT Challenge and the Blancpain GT Series Endurance Cup. On television, Eurosport televises live reports and highlights of the event in Belgium. In addition, the German TV station Sport1 will show highlights and background reports from Spa in the “Porsche GT Magazin” on Sunday at 22.00 hours.

Pre-race comments
Dr Frank-Steffen Walliser (Vice President Motorsport and GT Cars): “The level of competition in both the Intercontinental GT Challenge and the Blancpain GT Series Endurance Cup is extremely tough. With 68 cars on the grid, Spa is not only impressive in its number of starters, it’s also a veritable Who’s Who of GT racing. Of course a lot can happen during a 24-hour race, but as we underlined at the Nürburgring and in Le Mans, we’re very strong in the particularly long races. With two pro-cars competing we expect to have good chances. It would be great to celebrate another victory with the latest 911 GT3 R. To be well positioned for the next few years, the test work with the new car for 2019 is running at full revs.”

Sebastian Golz (Project Manager 911 GT3 R): “The Spa circuit offers a challenging mix of long full-throttle passages and moderate to fast corners, with big differences in elevation at times. Therefore it’s crucial to find the right balance between low drag and sufficient downforce. With the update package for 2018, we’ve managed this balancing act well, as the test day underlined. In the practice sessions before the race, it’s important for us to find the optimal tyre setup to avoid excessive wear. Like at the Nürburgring, we’ll work closely with our customer teams. This will also involve a lively exchange of information between them. Together we’re in a strong position to tackle the Ardennes classic.”

Romain Dumas (Porsche 911 GT3 R #911): “I’m excited to be back at the 24 Hours of Spa this year. The 2010 win was my second after 2003 when we beat the competition in a higher class in the rain. What helped us back then can help us again this time: With its rear engine, the Porsche performs strongly in the wet, and it rains a lot at Spa.”

Frédéric Makowiecki (Porsche 911 GT3 R #911): “This will be my second time at the Spa 24-hour race. After the previous races of the Blancpain GT Series Endurance Cup we know we’re facing a big challenge. Still, we’re heading to Spa with high expectations. We have a good overall package: The weather in the Ardennes is notoriously changeable, but even in the rain the Porsche has traditionally been strong.”

Dirk Werner (Porsche 911 GT3 R #911): “The racetrack, the parade in the town and the large, professional grid line-up makes Spa a great event that I look forward to every year. With our participation in the Blancpain GT Series Endurance Cup as well as the test day we’re well positioned in terms of setup and tyres. Since I’ve already finished second several times at Spa, I’m hoping, of course, that it soon works out with a victory. After the successes at the Nürburgring and in Le Mans, Porsche can travel to Belgium holding its head high.”

Timo Bernhard (Porsche 911 GT3 R #117): “Just like Le Mans, Nürburgring and Daytona, Spa has unparalleled characteristics. A good mix of aggressiveness and risk is important here: To win, we need to be extremely fast, but we can’t make any mistakes. Having been a team boss last year, I’m now looking forward to driving with Laurens and Earl. It makes me proud to compete for my own team with this top-class crew.”

Earl Bamber (Porsche 911 GT3 R #117): “I’m looking forward to driving for Timo’s squad, with which I began my career in Europe in the Porsche Carrera Cup Deutschland. Now he’s a driver and with Laurens we should make a strong trio. The test day prior to the race was promising, so I hope we can bring home a podium result.”

Laurens Vanthoor (Porsche 911 GT3 R #117): “Thanks to my overall victory here in 2014, I have wonderful memories of Spa. Last year I competed with Kévin Estre and Michael Christensen in Timo Bernhard’s Porsche. We came fourth. At the beginning of the race we were handed a penalty, but managed to make up the lost time over the distance. In this respect, as long as we don’t make mistakes we should be able to fight for victory.”

Marc Lieb (Porsche 911 GT3 R #540): “It’s going to be incredibly close at Spa – we’ve witnessed this in the Blancpain GT Series Endurance Cup races. To be competitive here, you have to get the most out of your car. Therefore, an optimal setup is critical. I know Tim Pappas and Jeroen Bleekemolen well, and with Marc Miller we now have a fast ‘bronze’ driver in our crew. Our aim is to race for victory in the Pro-Am class.

This is the Intercontinental GT Challenge
The Intercontinental GT Challenge is the first global racing series with GT3 vehicles as the top calss. It was founded in 2016 by the SRO Motorsports Group led by Stéphane Ratel. Rather than compete with a factory squad, Porsche supports international customer teams in their campaign with the 911 GT3 R by providing works drivers and engineers from Weissach. For each race, a maximum of four vehicles selected by the manufacturer are entitled to earn points. Of these, the two best-placed vehicles at the end of the race are awarded points for the manufacturer’s overall classification. In the driver’s category, however, the drivers of all cars nominated by manufacturers are eligible for points.

The Blancpain GT Series Endurance Cup
The Blancpain GT Series Endurance Cup, also run by the SRO Motorsports Group, is reserved for race cars that comply with FIA GT3 regulations. Storied racetracks, cost-effective conditions of participation and equality in terms of technology thanks to the Balance of Performance form the framework of this customer-oriented championship. The season highlight of the championship, the 24 Hours of Spa, is run alongside the Intercontinental GT Challenge. In the series contested all over Europe, there are overall classifications for teams and drivers.