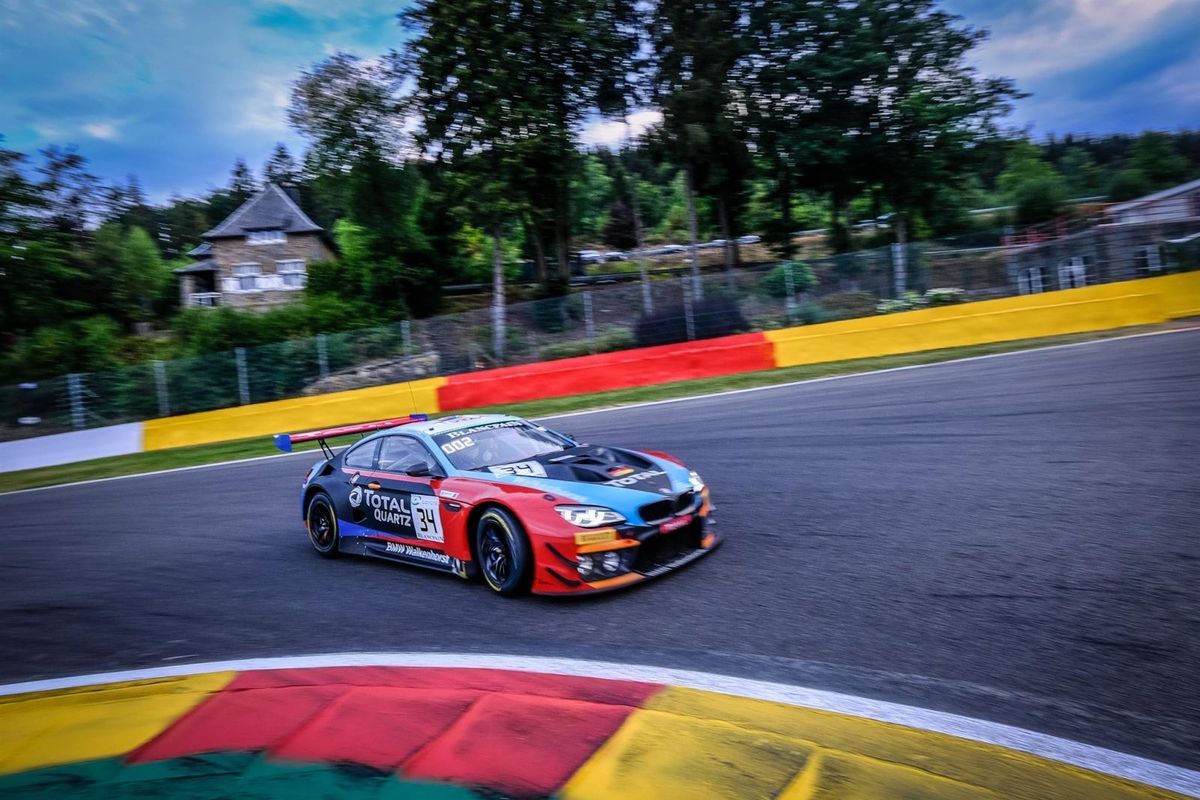 The #34 Walkenhorst Motorsport BMW M6 GT3 set the fastest average time in qualifying for the Total 24 Hours of Spa to lead a contingent of 20 cars into today’s SuperPole session, while starting positions 21 through 63 have been finalised for this weekend’s race.

The trio of Philipp Eng, Tom Blomqvist and Christian Krognes delivered consistently quick performances aboard their M6 GT3 to take provisional pole and book a spot in Friday evening’s shootout. Norwegian ace Krognes proved to be particularly impressive by topping his segment of qualifying with a lap of 2m19.012s.

The fastest individual time belonged to Dries Vanthoor, who hustled his #1 Audi Sport Team WRT machine around the Spa-Francorchamps circuit in 2m18.763s. That saw the youngster lead his segment, though ultimately the #1 R8 LMS he shares with Christopher Mies and Alex Riberas took fourth on combined times.

Nevertheless, the Belgian squad will have considerable hope for the SuperPole session, which will see the top-20 cars from this evening’s qualifying battle for their place on the first 10 rows of the grid. Each squad will nominate one driver, who will complete just two flying laps of the circuit.

Among the other outfits to secure safe passage to tomorrow’s session were the defending race winners, Audi Sport Team Sainteloc, whose #25 entry was second fastest on average times. It led a quartet of R8 LMS machines, with two Audi Sport Team WRT cars followed by the #29 Montaplast by Land-Motorsport entry.

Last year’s runner-up, the #8 Bentley Team M-Sport Continental GT3, was also comfortably among the top-20 in sixth spot, followed by a Mercedes-AMG, a Ferrari, a Lamborghini and an Aston Martin. Representatives from a further three brands are also set to contest SuperPole, meaning 10 of the 13 competing marques will start among the top-20 on Saturday afternoon.

Of the three to miss out, the #23 GT Sport Motul Team RJN Nissan GT-R was a mere 0.020s shy of securing a spot among the 20 fastest cars. The #54 Emil Frey G3 Jaguar also came close to booking a SuperPole spot in 23rd, but the car nevertheless secured a very comfortable pole position for the Silver Cup class. Japanese marque Honda, which is making its first appearance at the 24 Hours with its new NSX GT3, will start from ninth in Pro-Am and 49th overall.

Am Cup pole was secured in commanding fashion by the #188 Garage 59 McLaren 650 S GT3 of Chris Harris, Alexander West, Chris Goodwin and Andrew Watson. The British squad took 37th overall, beating several Pro-Am and Silver Cup cars in the process. In Group National, the #67 GDL Racing Lamborghini Super Trofeo will start from first in class after snatching top spot at the very end of qualifying.

The #76 R-Motorsport Aston Martin V12 Vantage will be among the significant absentees from SuperPole after a technical problem forced it to miss the final segment of qualifying. The car was fourth on average times when Jake Dennis came to a halt at Raidillon, scuppering the crew’s hopes of making tomorrow’s battle for the top grid positions.

The #7 Bentley Team M-Sport machine will also start from the back after failing to register a lap in the final segment of qualifying. It will be joined by the #6 Black Falcon Mercedes-AMG GT3, which did not contest qualifying after suffering an accident in free practice.

Tomorrow’s SuperPole session is scheduled to get underway at 18.30 and will see the fastest drivers at the Total 24 Hours of Spa going all out to secure their place at the very front of the field.

Philipp Eng, #34 Walkenhorst Motorsport BMW M6 GT3: “It might come as a bit of a surprise that we have set the quickest qualifying time, but I’ll take it! My teammates did a brilliant job and I am very proud of Walkenhorst Motorsport as well, because this is the first time they have entered the Pro class at this race. We had an amazing car with great balance, so we just had to drive it. I struggled a bit with traffic, but the lap time was still enough. We have done the job for now, and we hope to be at the front again tomorrow and, more importantly, on Sunday.”

Frederic Vervisch, #25 Audi Sport Team Sainteloc Audi R8 LMS: “There is no extra pressure on my shoulders after joining last year’s winners and in fact I enjoy the trust Audi that has put in me to join this team. There is an excellent atmosphere and we are laughing all the time. We have a good average time today, and if we can stay out of trouble I think we will have an enjoyable weekend.”

Nico Müller, #2 Audi Sport Team WRT Audi R8 LMS: “The new qualifying format does not change things much. Once the helmet is on, you aim to go as quickly as possible and you do not think about the possibility of making a mistake. Traffic was an important factor tonight; it was all about getting a clean lap in and, together with my teammates, I managed to do that reasonably well. So far, so good.”

Alex Fontana, #54 Emil Frey G3 Jaguar: “First of all, I am really happy to be here, especially as this is our fourth Endurance Cup pole position in a row. It wasn’t an easy task as we saw in free practice that we still had some work to do on the car. As was the case for most of the drivers, it was difficult to get a clear lap because of the traffic. We just missed SuperPole, which would have been a great achievement, but we still have something to show for our work.”

Felix Rosenqvist, #49 RAM Racing Mercedes-AMG GT3: “Nothing really went wrong during qualifying. The car felt great, which is a good sign for the race. To be fair, we did not expect to be this close to SuperPole. My three teammates did an amazing job and it is fantastic to be on pole in Pro-Am, as this was our goal.”

Andrew Watson, #188 Garage 59 McLaren 650 S GT3: “We have a lot of fun within this team and Alexander West is the reason I am here, so delivering this result means a lot to us. Garage 59 is a great team and I couldn’t have asked for more. On the other hand, pole position does not mean that much in such a long race. Now we will have to fight in order to keep the position.”

Sarah Bovy, #67 GDL Racing Lamborghini Super Trofeo: “To be honest, I was not expecting to be on pole, because we had a 10-second gap and I knew I wouldn’t have the chance to get a clean lap in. In the end, we managed to do it and this is something I can tick off my to-do list!”